The magazine continues to promote anti-Israel bias and a warped vision of Judaism. 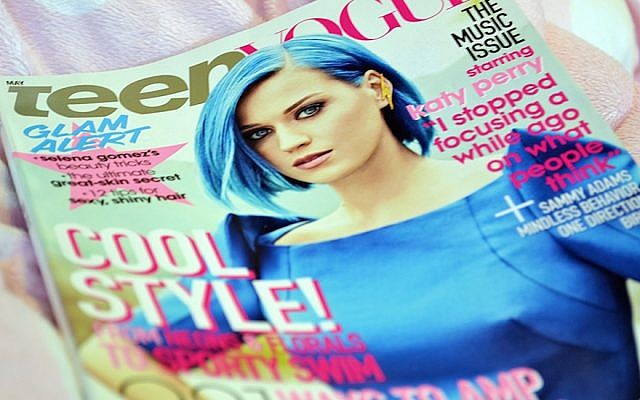 Publishing giant Condé Nast’s youth fashion magazine Teen Vogue, the self-proclaimed “destination for the next generation of influencers,” continued last week to promote not only anti-Israel bias but a warped vision of Judaism.

The main subject of Zack Haber’s article “Pen Palestine Project Fosters Connections Between Students in Gaza and the U.S.,” California teacher Heather Alexandra, tells Teen Vogue’s young readers that she developed a program for U.S. schoolchildren in which they become pen pals with children in Gaza because she “wanted to get involved in the Jewish value of tikkun olam … which is the idea that it’s the responsibility of Jews culturally and spiritually to engage in practices to repair the world.”

Of course, there’s nothing wrong with promoting cross-cultural connections and understanding. But both Haber and Alexandra rely on extremely biased sources to tell a one-sided story to both Teen Vogue’s readers and Alexandra’s elementary school students. Tendentiousness is not a Jewish value.

To set up her pen pal project, readers learn, Alexandra sought help from the Palestine Children’s Relief Fund, which, according to NGO Monitor, “presents a biased and distorted view of the conflict, omitting Palestinian terror attacks against Israeli civilians, including rocket attacks and terror tunnels, as well as Israel’s legitimate right to self-defense.” In the past, the group has received funding from organizations with known ties to terrorism. Of course, there is no mention of the group’s terror ties in Haber’s article. Instead, the organization is described as “a U.S.-based group that aids Palestinian youth.”

When Alexandra finally met some of the Gaza children in her program, “they wanted people to know their lives were under constant siege. … They never know when they’re going to be safe.” The children of Sderot could have told her the same thing, had she asked them. It doesn’t appear that she, or Haber, did. Nor did they talk to any Israeli children who have lost loved ones to terrorism, or Israeli young adults who serve in the IDF.

Haber also cites Euro-Med Human Rights Monitor, a group that is chaired by Richard Falk. Falk is a 9/11 truther who was condemned in 2011 by then-British Prime Minister David Cameron for publishing an anti-Semitic cartoon. In 2012, as CAMERA has written previously, the U.K. Foreign Office also condemned Falk “for providing a cover endorsement for an anti-Semitic tract called ‘The Wandering Who’ that compared Jews to Nazis.” More recently, Falk was the author of a U.N. report on Israel that was so biased the U.N. itself rejected it. According to UN Watch, “As the U.N.’s rapporteur on Palestine, Falk was so extreme in his support for the Hamas terrorist organization that even the Palestinian Authority tried to remove him, on grounds that he was a ‘partisan of Hamas.’”

Haber also parrots debunked accusations from biased groups Amnesty International and Human Rights Watch. Is he aware that Human Rights Watch’s own founder, Robert Bernstein, called out the group’s bias against Israel, saying that it had “lost critical perspective on a conflict in which Israel has been repeatedly attacked by Hamas and Hezbollah, organizations that go after Israeli citizens and use their own people as human shields”? Or that the ADL recently wrote that Amnesty’s bias against Israel demonstrated that the group “appears to have abandoned its perch as a leading global human rights organization”?

The issues of electricity, water and poverty in Gaza that Haber describes based on reports by those groups are both lamentable and complex, but they are mainly attributable to the fact that in 2006 the people of Gaza elected a terror organization, Hamas, and that the group consolidated power in Gaza a year later. Since that time, Hamas has focused its efforts on ways to attack Israel rather than on the welfare of its people, using international aid to build terror tunnels and exploiting hospitals and schools for military purposes. None of this is of concern to Haber.

Of course, with such sources, the article is factually flawed as well. In the first paragraph, Haber reports that, according to the U.N., “more than 2,200 Palestinians were killed in [2014’s ‘Operation Protective Edge’], most of them civilians.” But an analysis by the Meir Amit Intelligence and Terrorism Information Center found that of those casualties who could be identified by name, at least 55% were combatants. Nor does Haber mention Hamas’ use of human shields as a cause of civilian casualties.

“As years passed,” Haber writes, “Alexandra saw reports from human rights organizations related to Israeli soldiers increasingly detaining Palestinian children and subjecting some of them to abuse while in detention.” No context is given (in fact, any such detentions would necessarily have been in the West Bank, not Gaza). But children throwing rocks at moving vehicles is common, and contrary to the frequent characterization of such attacks, they can be deadly.

Teen Vogue tells readers, “Israel enforces a strict travel ban.” Of course, this is not true in regard to Gaza residents crossing into Israel daily for work and sometimes for free medical treatment in Israeli hospitals. There’s no mention of why Israel would rightly monitor this travel closely—due to attempts to cross the border to commit attacks inside of Israel—and the fact that Gaza shares a border with Egypt is barely mentioned.

Nor does Haber explain to readers the reason for the repeated wars that cause such hardship for the Gaza participants of the pen pal project—that Hamas is committed to the destruction of Israel.

And, of course, contrary to Haber’s assertion, there is no such sovereign entity as “Palestine.”

Teen Vogue has, over the past year, used articles about both Passover and Hanukkah to undermine the Jewish connection with Israel. It’s especially insidious that Teen Vogue is sending a message to its Jewish readers that the socially acceptable way to be Jewish is by working against the Jewish homeland. But Teen Vogue seems to have a habit of platforming Jews from the fringe minority that doesn’t support Israel, while ignoring the vast majority of Jewish young adults and teens that do support and feel a strong connection to the Jewish state.

Karen Bekker is the assistant director of the media response team at CAMERA, the Committee for Accuracy in Middle East Reporting in America, a media-monitoring, research and membership organization devoted to promoting accurate and balanced coverage of Israel and the Middle East.

This article was originally published by CAMERA.

The magazine continues to promote anti-Israel bias and a warped vision of Judaism.