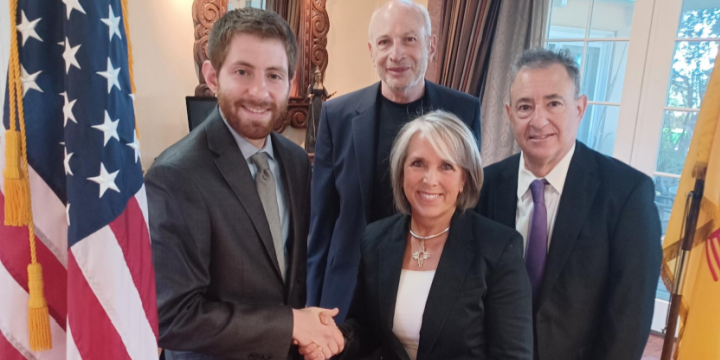 The order ensures that New Mexico’s Executive Department will base its assessments of antisemitism complaints on the definition.

Commenting on the news on Tuesday, StandWithUS CEO Roz Rothstein called on other lawmakers to follow Governor Lujan Grisham’s lead.

“We know that current understanding of antisemitism is insufficient without a clear definition,” she said. “We need other governors, state and local legislators and organizations to adopt the IHRA definition to help identity, report, and combat antisemitism.”

Jordan Cope, Director of Policy Education for StandWithUS, was present for the order’s signing at the governor’s mansion. He noted that without the definition, “people may have no idea when they are witnessing — or even engaging in — antisemitism.”

“Because antisemitism mutates over time, it is sometimes difficult to identity,” he said. ” Anti-Jewish bigotry was once focused on the religion of Jews, vilifying them for various aspects of their religious beliefs. Then antisemitism changed to focus on the notion of race, demonizing Jews for being inferior to ‘pure-white’ Aryans. Most recently, antisemitism is also connected to the State of Israel, demonizing the country perceived as the Jewish collective much like older forms of antisemitism focus on the individual Jew.”

Its board chairman, Shawn Evenhaim, said, “IAC for Action applauds Governor Grisham for not only recognizing IHRA, but for implementing it in order to ensure equal protections from discrimination for Jewish victims. We are grateful to see that Jewish and Israeli-Americans are not left to contend with incidents of antisemitic hatred alone.”

The International Holocaust Remembrance Alliance (IHRA) definition of antisemitism is used by over 850 governing institutions, including the US State Department, European Union, and the United Nations. Over 30 countries have adopted it with support from lawmakers across the political spectrum.