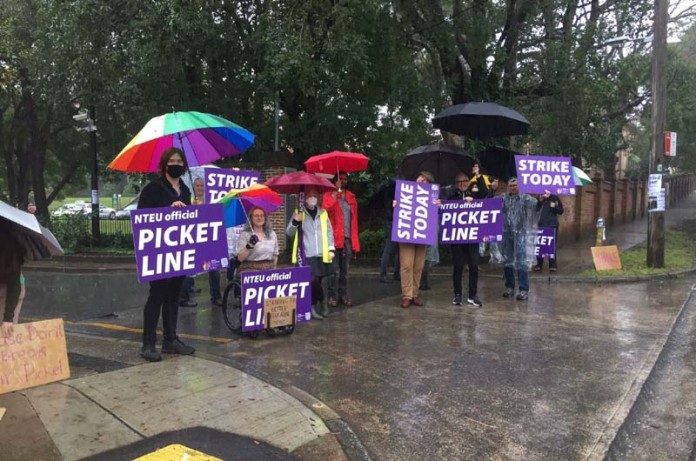 Members of Australia’s National Tertiary Education Union on strike, May 12, 2022.

1. It rejected the International Holocaust Remembrance Alliance’s definition of antisemitism as drawing comparisons of contemporary Israeli policy to that of the Nazis; denying the Jewish people their right to self-determination, e.g., by claiming that the existence of a State of Israel is a racist endeavor; accusing the Jews as a people, or Israel as a state, of inventing or exaggerating the Holocaust; and applying double standards by requiring of Israel a behavior not expected or demanded of any other democratic nation.

2. It called on its members to boycott visits to Israel hosted by “pro-Israel organizations.”

H/T to Jwire that cited the full resolution:

According to the Australian Jewish News, the motion was proposed last week at the NTEU national council by Fahad Ali, a boycott, divestment, and sanctions (BDS) advocate.

Meanwhile, the NTEU has also declared a strike, leading the University of Sydney to advise staff to work online during the strike days, October 13 and 14. The University “recommends that staff who can work from home do so, including switching to remote teaching.” Significant disruption to the university’s operations is expected, as union members picket the campus entrances to prevent students from getting in.

Fahad Ali tweeted: “Solidarity with all my comrades on the picket lines today at the @NTEUNSW @USYDEBA2021 strikes: our fifth day of industrial action this year. I’m not able to be there in person today, but huge love and respect to all my colleagues who won’t stop fighting until we win!”