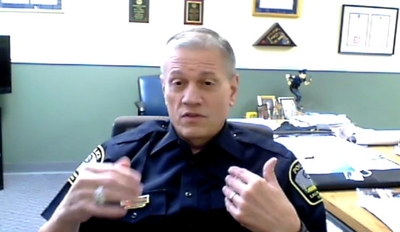 The Washington Post posted a profile Sunday about the police chief of a small Georgia town who has a fairly revolutionary training program. Rather than teaching his officers to shoot at a suspect’s “center mass,” LaGrange Police Chief Louis Dekmar wants his cops – when possible – to aim lower. The objective is to incapacitate suspects, rather than kill.

After examining more than 900 fatal police shootings nationwide, Dekmar and his training sergeant found that nearly 25 percent involved suspects armed with weapons other than guns. If the first shot doesn’t stop a suspect with a knife, the thinking goes, there’s still time to act.

Shooting to incapacitate, therefore, could significantly reduce deaths in police shootings. It’s too soon to know whether it will work, and there are plenty of skeptics among police.

Where did Dekmar, a past president of the International Association of Chiefs of Police, get such a radical idea?

“It was in Israel during a 2004 police exchange that Dekmar first saw how agencies elsewhere practiced shooting beyond center mass to incapacitate suspects — aiming for areas of the body like the legs and hips,” the Post reported. “He was intrigued but thought the idea would never work in cities back home, partly because so many Americans have guns.”

Dekmar’s experiences in Israel, and the lessons he brought home, further expose the shameless and bigoted lie driving efforts to stop the police exchanges. The Investigative Project on Terrorism exposed the misrepresentations by anti-Israel voices last year in a two–part video series.

The series, “House of Lies,” showed that none of the police exchange programs include any tactical training. Yet, high-profile voices from Louis Farrakhan and Marc Lamont Hill to Linda Sarsour all claim the programs directly contributed to the death of black people in America.

“The New York City Police – they’re killing us,” Hill said in a 2018 radio appearance. “But they’re being trained by Israeli security forces.” The exchange programs, Sarsour said in 2016, lead to police “killing unarmed black people across the country.”

There simply is no data to support these charges.

But the narrative became a staple in protests after last year’s police killing of George Floyd, an unarmed black man. Floyd suffocated when Minneapolis Police Officer Derek Chauvin, since convicted of second degree unintentional murder and third degree murder, kept his knee pinned to Floyd’s neck for 9 minutes and 29 seconds.

Imagery promoted made it seem that Chauvin was following Israeli instructors. 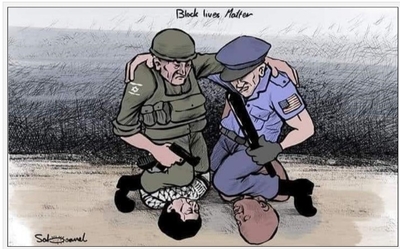 The IPT series also showed how one group, Jewish Voice for Peace (JVP), tried to cover up its own role promoting the blood libel casting Israel as responsible for killings by American police. JVP, whose members “unequivocally oppose Zionism” launched a campaign in 2017 to shut down the police exchanges. It created a website, “Deadly Exchange,” which directly linked the programs to “extrajudicial executions, shoot-to-kill policies, police murders.” 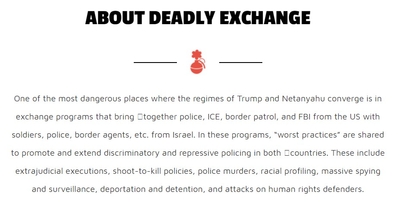 JVP deleted that rhetoric in June 2020 and tried to sweep it under the rug. It issued a statement saying that “Suggesting that Israel is the start or source of American police violence or racism shifts the blame from the United States to Israel … It also furthers an antisemitic ideology. White supremacists look for any opportunity to glorify and advance American anti-Black racism, and any chance to frame Jews as secretly controlling and manipulating the world. Taking police exchanges out of context provides fodder for those racist and antisemitic tropes.”

But today, JVP’s website still claims the exchanges promote “worst practices … to promote and extend discriminatory and repressive policing in both countries.” Others continue to directly tie to the programs to police killings despite the JVP disclaimer.

In June, San Francisco State University Arab and Muslim Ethnicities and Diasporas (AMED) Studies Professor Rabab Abdulhadi described the Anti-Defamation League’s weeklong “Leadership Seminar in Israel” as a “deadly exchange” program that “brings U.S. police, and I would call colonial security apparatus along with Israeli military to co-train together.”

In July, the Council on American-Islamic Relations (CAIR) re-issued an old report smearing one of the exchanges, the Georgia International Law Enforcement Exchange (GILEE), “as an anti-Muslim hate group.” It re-issued a 2019 report linking the exchange program to “deadly police shootings that occurred in Georgia” and said working “with human rights violators make these problems worse.”

The IPT series included interviews with four police chiefs, including Dekmar, who said their experiences in Israel in no way matched what the critics allege. Dekmar told us that he had seen “broad statements that have little basis in reality. And, I’m just curious as to, you know, where they’re getting their information on the programs, because in the several programs that I’ve been in, none of them reflect the kind of picture that has been painted by these organizations, which appear more to be politically based, in terms of the accusations, as opposed to fact-based.”

His colleagues had similar reactions:

Chief Louis Dekmar provides a walking, daily rebuttal that demolishes the entire “Deadly Exchange” narrative. But the national attention given to his experiences and efforts is unlikely to prompt CAIR and other critics to back off. To embrace his new approach to training, they’d have to accept a guy who credits Israel.

The training is just one aspect of Dekmar’s tenure that progressives should appreciate. He has been recording his officers’ interactions with the community since the late 1990s. They have used body cameras for more than a decade. He was early to add crisis intervention training to “de-escalate encounters with people affected by mental illness,” the Post reported.

Dekmar’s idea has plenty of skeptics among fellow police leaders. It’s not clear that the training will be more successful than the status quo, or whether it might create added risk in some confrontations with armed suspects. But one of his officers did shoot a suspect last month. The man had a machete. The officer did not aim at center mass and the suspect, while wounded, survived.

As we have pointed out, the critics have yet to produce one whistleblower – a single police leader among the hundreds who have traveled to Israel – to corroborate the claims that the programs lead to increased police violence, especially against minority groups. There is no evidence of any death resulting from the programs derided as “deadly exchanges.”

Chief Dekmar, in going out on a limb to try reducing deaths in police shootings, shows the exact opposite is true.