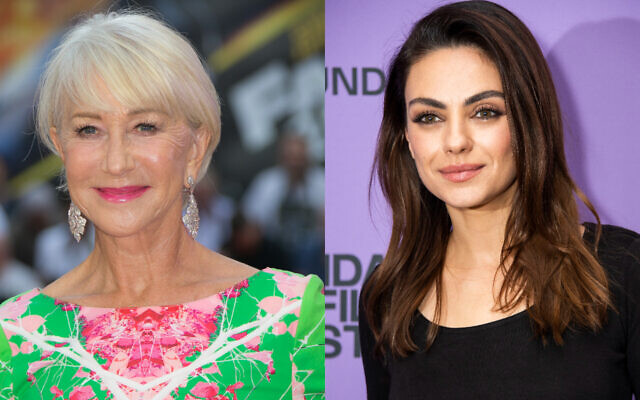 The letter, organized by the Creative Community for Peace nonprofit, was signed by actresses Helen Mirren and Mila Kunis as well as actors Billy Porter, Neil Patrick Harris and Zachary Quinto.

“We reject any attempt to boycott TLVFest – Israel’s largest LGBTQ Film Festival — which works to showcase the stories of LGBTQ people globally and create a brighter future for LGBTQ people both inside Israel and around the world,” the letter reads. “We stand united with all the participating filmmakers against the divisive rhetoric espoused by boycott activists who seek to misinform, bully and intimidate artists into removing their films from the festival or shame them for participating in the festival.”

The upcoming event, known as TLVFest, is slated to kick off on November 11, with screenings of dozens of films as well as other events, including a drag competition and a final awards ceremony. The event consistently comes under fire from BDS activists, who accuse it of “pinkwashing” Israel by highlighting gay rights in an effort to distract from its activities toward Palestinians.

Last year, more than 100 LGBTQ filmmakers urged a boycott of the festival “until Israel complies with international law and respects Palestinian human rights.”

In a statement published ahead of this year’s festival, Yair Hochner, director of TLVFest, noted that the event is a private, non-governmental affair, which includes Palestinian voices, and that boycotting it does nothing to advance efforts toward peace.

“These movements have chosen the wrong target, and instead of promoting the Palestinian cause, they try to silence the ones who fight for freedom of speech,” wrote Hochner. Boycotting the festival will serve to only “inflame violent voices and unfortunately will not put pressure on Israel’s government to end its ongoing human rights violations,” he said.

The letter published this week by CCFP echoed those sentiments.

“We believe that anyone who works to subvert TLVFest merely adds yet another roadblock to freedom, justice, equality, and peace that we all desperately desire, especially for the LGBTQ community that is persecuted throughout the Middle East and around the world,” the letter reads. “Artists should never be silenced, and art should not be subverted for political goals.”