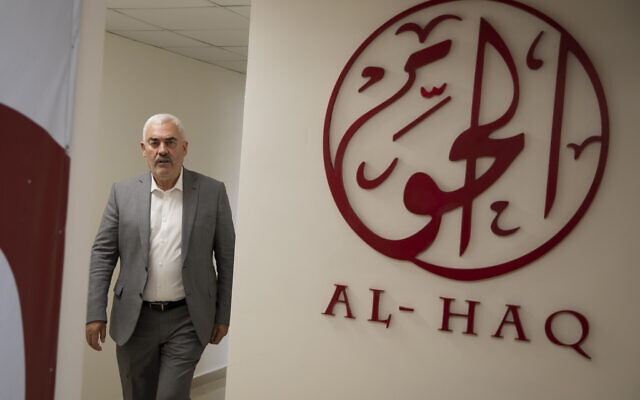 A sixth group that was declared a terrorist organization by Gantz had already been banned by the IDF last year.

With these official designations, the military was granted the power to shutter the organizations’ offices and arrest their members, among other moves. The IDF has been known to enforce such classifications at its discretion or, as some critics argue, arbitrarily. For instance, the Palestine Liberation Organization, the ruling party of the Palestinian Authority, is also officially banned, though the ban is largely ignored by the IDF.

Israel maintains that the six newly blacklisted Palestinian organizations — Al-Haq, Addameer, Defense for Children International-Palestine, the Bisan Center for Research and Development, the Union of Palestinian Women’s Committees and the Union of Agricultural Work Committees — serve as fronts for the Popular Front for the Liberation of Palestine terror group, which the groups have repeatedly denied and which has been questioned by their European and international funders.

Gantz’s designation of the groups as terrorist organizations last month had comparatively little immediate impact, as they operate within the West Bank and are thus officially outside of Israel’s jurisdiction. Still, the terrorist classification has caused some of the groups’ funders to pull their financial support out of concern that they could be targeted with banking sanctions.

On Sunday, the head of the IDF Central Command, who has formal legal authority over the West Bank as military governor of the area, officially deemed five of the groups — Al-Haq, Addameer, Defense for Children International-Palestine, the Bisan Center for Research and Development and the Union of Palestinian Women’s Committees — “unauthorized organizations,” the equivalent of terrorist organizations in military legal parlance.

The Union of Agricultural Work Committees had already been outlawed in the West Bank last January.

Central Command chief Maj. Gen. Yehuda Fuchs decided to outlaw the groups “after he was presented with copious, varied and reliable information that indicates that these organizations represented a wing of the Popular Front for the Liberation of Palestine terror group,” the military said in a statement.

Israel’s decision to outlaw the six groups has been questioned by the United States and European allies and criticized by the United Nations and other international organizations, who have decried it as an attack on Palestinian civil society.