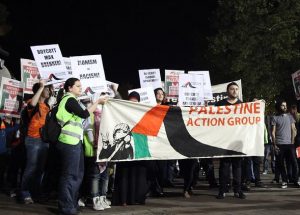 EXECUTIVE SUMMARY: Contemporary antisemitism has the ability to graft itself onto a variety of causes and movements. But the social and information environment in the US and Europe is strongly conditioned by virtue-signaling among elites and increasingly among portions of the middle class. Antisemitism, in part through BDS-fueled antipathy toward Israel, is becoming a signal of middle class respectability. At the same time, though left-wing Western elites remain strongly anti-national, the working classes and other parts of the middle class are becoming renationalized. These and other class conflicts will shape antisemitism in the next decades.

Class has emerged as one of the most important features of global politics. Predictably, antisemitism and the boycott-Israel movement are enmeshed in class-based patterns of belief and behavior – but some of these patterns are new and counter-intuitive.

One unique feature of the BDS movement, consistent with antisemitic movements historically, is the ability to graft itself onto other contemporary concerns and movements. Three to four years ago in North America the equation was between the burgeoning Black Lives Matters movement and the Palestinian experience under the Israeli “occupation,” and moving from there to alleged connections between American and Israel “police” violence.

In the past year the migration crisis on the US southern border was the cause célèbre, with American “concentration camps” equated with the Palestinians’ “open air prison” of Gaza. Now, with the rise of “climate change” (rebranded from “global warming”) as the latest moral panic, the BDS movement has taken to equating portents of climate damage with the environmental “crisis” in Gaza.

It is tempting to dismiss such blatant hijacking as a variant of the much-parodied left-wing trope “world ends tomorrow; women, minorities hardest hit.” But the pattern indicates that the BDS movement sees an advantage to the strategy. The now well-documented association of ersatz grassroots organizations such as IfNotNow with incubators that train and fund-raise for a variety of far left causes demonstrates that at least some parts of the BDS movement are instruments for broad spectrum social mobilization. That these are aimed at Jews and Jewish interests demonstrates further that antisemitic agitation remains a useful revolutionary strategy. And as always, Jews are given the choice of either joining the revolution for “justice” or being condemned for their tribal adherence to retrograde parochial causes.

There is growing evidence that in Western social and information environments saturated with virtue-signaling, such strategies are having some success with members of the image-conscious, predominantly white middle class. Class attitudes are being set by a limited number of sources from the elite, interlocking media-education-NGO sector, which is to say coastal universities, celebrities, late night television hosts, “human rights” organizations, minority activists, and, increasingly, K-12 teachers. Perceptions of grievance, real and imagined, are the primary drivers in a victimhood arms race, where the reliably malleable notion of “social justice” has been weaponized against the foundations of the middle class itself.

Inspired by elite and activist perceptions – a hall of mirrors – elements of the middle class have fallen over backwards to demonstrate they are “progressive.” In turn, they have increasingly hijacked liberal discourse and institutions to prove exactly how “anti-racist” they are, loudly decrying “white privilege” and in the process expiating any guilt they feel about that privilege. This quintessential campus phenomenon has spread to local politics, the corporate world, and increasingly the texture of daily life as an element of style.

Shifting attitudes have produced bizarre contradictions. The reliably liberal, comfortably capitalist American bourgeoisie is now being ordered to endorse socialism and class warfare; the end of borders, nations, and citizenship; racial separatism; the destruction of all sex and gender distinctions; and a moral panic over climate that will upend industrial society – precisely as conditions for remaining within the respectable middle class. To do otherwise is a form of social deviancy relegating non-believers to the status of ”racist,’’ “alt-right,” “red-state,” Trump-supporting, earth-destroying troglodytes.

Israel, its supporters, and Jews in general are among the casualties of this new information battlespace, where “rights,” grievances, guilt, and “restorative justice” are paramount and where nations and ethnic particularism are anathema. Meanwhile, Israel and Jews remain targets of the far right, which now includes not simply neo-Nazis and white supremacists but hybrid extremists who amalgamate eco-fascism and neo-paganism. Most recent antisemitic violence has emanated from this sector, as well as from Muslim fundamentalism, but this could change. Left-wing violence was prominent in Europe and North America after the turmoil of 1968 and should be expected again, particularly if President Trump wins reelection in 2020.

There is no simple strategy to address these new class-based realities. There are scattered indications that limits are being reached as isolated members of the social and intellectual elites speak out against “cancel culture,” social justice upheavals in education, and BDS. Sheer excess and exaggeration have produced a backlash – witness the negative responses even within the Democratic Party to the class warfare demanded by leading presidential candidates.

These hints of self-correction are insufficient, however, to declare that the antisemitism that has been grafted onto every conceivable cause is no longer a concern. Jews and Israel are paranormal phenomena that exist outside historical time and the normal parameters of causality, and antisemitism is a force that seeks to remake both the future and the past to emphasize and thus combat Jews. Addressing antisemitism is thus, as ever, a kind of lose-lose proposition. Expressing concern is, to antisemites, a provocation, and a form of distraction or dissembling. This is doubly the case where Israel is involved. No shape-shifting, time-traveling strategy to counter antisemitism has been or is likely to be found.

A tactic that illuminates antisemitism and BDS precisely as elite concepts that have been foisted on the middle and working classes has some appeal. Israeli diplomats speaking in Iowa rather than California, addressing farmers rather than college students, may have utility. The drawbacks, however, are obvious: such an effort would be branded “populist” class warfare that takes sides against society’s intellectual and moral betters. It would thus be viewed, inevitably, as yet another Jewish conspiracy.

But triangulating between the changing dimensions of class is critical, both for Israel and for global Jews. For one thing, it may be argued that the confident predictions of an open, borderless world that remain at the heart of left-wing “globalist” conceptions are misguided. Nationalism revived – fueled by palpably imperious and incompetent rule by elite institutions, widespread deindustrialization, titanic migration crises, de-christianization, family collapse, and the consequent loss of identity and meaning – may be the future for most societies.

Jews, of course, are simultaneously blamed for inciting “globalism” as a means of “defeating” individual nations as well as for maintaining their own “ethnostate” in Israel. This unity of opposites illustrates the holistic and, again, paranormal nature of antisemitism.

Signs of a return to nationalist sentiments are clear. Brexit and the “yellow vest” movement in France show such instincts even in the heart of Europe among the working and even the middle classes. In the US, reactive antipathy toward Trump’s inarticulate and idiosyncratic articulation of American nationalism set back consideration of the concept, as has elite thrall to transnational progressivism. But the possible depth of the nationalist sentiment may be measured in part by the shrillness of its antagonists. It is telling that the Democrats, like the Labour party in Britain, have reacted by adopting the most anti-national policies imaginable.

Open borders and foreigners voting in local elections hasten a reckoning of unknown dimensions. Sustaining a form of class privilege by eliminating the conditions for national existence and thus privilege is the weirdly consistent Labour strategy, and it is spreading. Whether expiation through self-negation has its limits in the West remains to be seen.

But reality also has a way of asserting itself. Only a few years ago, only the working classes realized the destructiveness of trade agreements and corporate profit-seeking which removed industry from the US to China and other nations. This is now more widely acknowledged, including by industries that are relocating back to the US. In a parallel sense, expanded tourism to Israel and growing investment are reflections of an acknowledged reality that Israel is an accepted part of, indeed an asset to, the global community.

So is middle class antisemitism in the West another form of the madness of crowds, a 21st-century social tulip mania destined to collapse under the weight of its own inconsistencies and illogic? The BDS movement itself, as a specific manifestation, may go the way of other political religions thanks to its overwrought shrillness, but the larger class environment in the West is unlikely to change quickly. A socialist revolution of the type proposed by Labour and Democratic candidates cannot be dismissed, particularly with electorates obsessed with self-image and increasingly cosmic visions of “justice” and retribution. In that dystopian future, Jews and Israel will be made to suffer. In the meantime, the simple act of defying class expectations may be the healthiest move for individuals and ultimately for societies and nations.

Alex Joffe is a Shillman-Ingerman Fellow at the Middle East Forum and a senior non-resident fellow at the BESA Center.


Read all stories by Alex Joffe