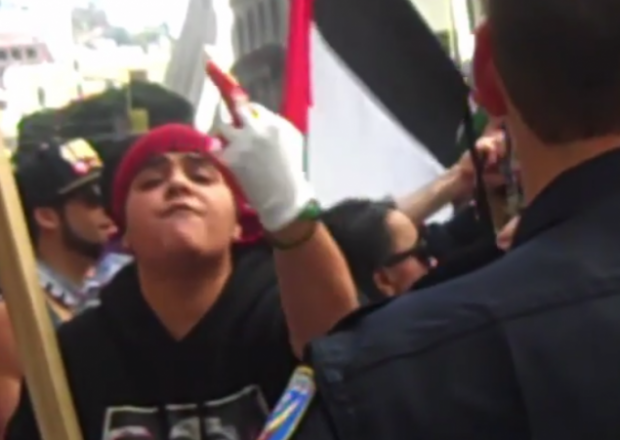 For the past decade, anti-Israel activists in the United States and Europe have called on pension funds, universities and churches to sell their stock in companies that do business with Israel, particularly its defense establishment. They have also called for people and governments to boycott Israel, its products and services.

It’s part of the boycott, divestment and sanctions (BDS) campaign that seeks to isolate Israel from the international economy and force the Jewish state to make concessions to the Palestinians.

BDS proponents say they want to promote human rights and peace between Israel and the Palestinians, but it’s hard to ignore that their criticism is nearly always directed at Israel while groups like Hamas and Hezbollah are given a pass. The effect is not to promote peace, but to portray Israel’s efforts to defend itself as immoral and indefensible.

There’s a lot of debate over whether or not the BDS movement represents a threat to Israel.

For example, Daniel Rosenberg from Haaretz tells us BDS does not present a threat to the welfare and safety of the Jewish state and by trying to counter it, Israeli diplomats are actually making things worse. This is the theme Rosenberg has offered in two recent commentaries inHaaretz, (a newspaper that, truth be told, is more likely to be read by Europeans and North Americans who hate Israel than the people who actually live there).

In a piece published in Haaretz on April 1, 2016, Rosenberg described the BDS movement as a “marginal phenomenon whose power base consists of college students, church and union activists, and academics in fields prone to left-wing posturing like anthropology and cultural studies.”

In another piece published on June 6, 2016, Rosenberg described BDS as a “noisy but tiny” movement that has no real impact on the Israeli economy and whose adherents are flattered by the gargantuan effort to counter it.

In some ways, Rosenberg has it right. The BDS movement does not have much of an impact on Israel’s economy. People need the stuff Israel invents — medicine, cell-phones and computers. (Even Jew-hating Jihadists who want to brings us back into the dark ages need Israeli-developed technology to advance their cause. How else are they going to get their execution videos published on Youtube?)

And yes, the BDS movement is comprised of leftist activists and academics that inhabit the grievance studies ghetto of higher education. BDS supporters are the folks who haven’t recovered from the West winning the Cold War. Since the collapse of Communism, a whole generation of disaffected cranks had wandered in limbo looking for another anti-Western ideology to embrace; BDS fits the bill.

By embracing BDS, secular academics and activists can align themselves with jihadism without having to recite the shahada or affirming the Pact of Omar. BDS gives these folks the cover to believe Judith Butler who describes Hamas and Hezbollah as part of the “global left.”

Moreover, the institutions that fall prey to BDS are dying. Liberal Protestant churches that pass BDS resolutions are losing members and churches hand over fist. A decade ago, the United Church of Christ had 1.4 million members, these days it has less than a million members.

Colleges in the U.S. where BDS garners its strongest support are going through a massive retrenchment. Fewer and fewer families are willing to take on huge debt burdens for their children to be indoctrinated into Judith Butler’s global left. Consequently, support for BDS in a civil society institution is a sign of ill health and decline.

Despite all this, Rosenberg has got it wrong about BDS, dreadfully wrong. Even dying institutions can grievously harm the societal ecosystems in which they operate.

Mainline churches that support BDS, most notably the United Church of Christ, and the Presbyterian Church USA, are the Chernobyls of American civil society. They no longer serve the purpose for which they were established but still pollute the society in which they operate with harmful misinformation and propaganda. That’s why BDS activists target these churches with divestment and boycott resolutions, which are merely a prop, a stchick, a McGuffin, or a pretext for the anti-Israel crowd to get the podium in this churches.

The goal of BDS is to get a hold of the microphone at a church’s national assembly or a student government’s legislative body and spout anti-Israel propaganda into the assembly hall and make life difficult for Jews in American society. BDS is not merely an assault on Israel’s economy and reputation, but an attack on the Jewish Diaspora, which has historically been an important part of the pro-Israel community in the U.S.

Nowhere is this more evident than on college campuses in the U.S. When BDS activists are able to get a resolution on the agenda of a student senate, Jews on campus who come forward to defend Israel are subjected to social isolation and demonization. Some reach out to CAMERA, a member of the Conference of President of Major American Jewish organizations, for help.

This process has been well-documented by Tammi Benjamin’s AMCHA Initiative which tracks antisemitism on college campuses in the U.S. BDS activism, (along with the presence of anti-Israel organizations such as Students for Justice in Palestine) is a very strong predictor of aggressive acts against Jews on campus.

This is no joke. While working at CAMERA, I regularly hear stories of pro-Israel Jews being spit on, pushed to the ground, stalked, swarmed and subjected to death threats by anti-Israel activists on college campuses throughout the U.S. In order to avoid this hostility, some Jews embrace a claustrophobic and cloistered Anne Frank existence, retreating into a secret annex, hiding their identity as Jews to avoid the defamation directed at their peers. It’s shameful that college administrators have let BDS activists impose a ghetto-bench atmosphere on their campuses, but they did.

If Michael Oren, Israeli Ambassador to the United States can’t finish his talk at UC Irvine, then what chance does an average Jew have in being treated fairly in a classroom at this school?

Anyone who has any doubts about the impact of BDS on the atmosphere of college campuses needs only to watch protesters calling for “Zionists” to be driven out of Hunter College late last year.

It is an outrage that events like this are happening at college campuses in the United States, a country that historically has been a bulwark against antisemitism, but it should come as no surprise. The narrative used to justify BDS resolutions on college campuses (and in mainline churches) is that Israel is a monstrous and genocidal nation, more worthy of condemnation than any other country in the Middle East. People, Jews especially, who would support such a nation in the public square must themselves be monsters and worthy of contempt.

BDS activism has done more than poison the atmosphere on college campuses. BDS is also factor that has set an increasing number of Democrats against Israel. And that was the point.

Pro-Palestinian activists like Marc Ellis and Phyllis Bennis stated it quite clearly in the early 2000s: BDS was intended to force Zionist Jews to decide between their liberalism and their Zionism. This helped give anti-Israel messaging an opening in the Democratic Party.   Is there a direct line of causation between BDS and Bernie Sanders putting anti-Israel on the Democratic Platform Committee? No. But BDS helped create an environment where such a thing could take place.

To be sure, the anti-Israel BDS crowd is not able to change public opinion in the United States on a mass scale, but it is able to provide cover for executive action — a very valuable commodity in an age of imperial presidencies. Last year, the Obama Administration did not need the preponderance of public opinion to usher the Iran Deal through Congress. Instead, he just needed political cover — which the BDS movement helped give him — to get Congressional approval for a deal with a country that most Americans simply do not trust.

There’s another problem with BDS. In addition to promoting an unwholesome obsession with Israel, BDS activists hinder the ability of intellectuals to address the human rights catastrophe that is unfolding in Muslim-majority countries in the Middle East.

Nowhere is this more evident than in the academy. The American Anthropological Societyrecently voted down a proposal to impose an academic boycott on Israel, which is a good thing, but there’s a question that needs to be asked: What resolutions has the AAA’s legislative body passed, or even considered, to confront jihadism’s impact on religious freedom, the status of women and human rights in Muslim-majority countries?

It’s a reasonable question. The organization’s motto is “Advancing Knowledge, Solving Human Problems” and clearly, jihadism is a huge problem worthy of our attention and AAA activism. Muslim-majority countries do not have a monopoly on human rights abuses, but let’s face it. The most egregious assaults on religious freedom, the rights of women and against human dignity itself are perpetrated by Jihadists who justify their affronts on human decency with appeals to the Muslim faith. It’s a crucial topic of study and activism.

And where are the scholar/activists in the AAA on this? Out in left field, waiting for someone to hit them the ball. Anti-Israel activism by BDS activists has simply sucked most, if not all of the oxygen out of the room when it comes to Middle East human rights activism in the AAA. There are eight links to articles about female genital mutilation on the organization’s website, butthousands about Israel and the Palestinians.

The same obsession can be seen on college campuses. BDS activists regularly construct “apartheid walls” on campus quads and issue mock eviction notices in dormitories to highlight the suffering of the Palestinian people, but where are the mock slave auctions and fake mass graves to highlight ISIS’s  atrocities in Iraq and Syria? Where are the protests against female genital mutilation?

The damage the BDS movement has done to American civil society is real, but it can be reversed with courageous and audacious acts of truth telling. Hopefully, students in the class of 2020, which begins classes this fall, will know better than believe what they read in Haaretz and get to work.