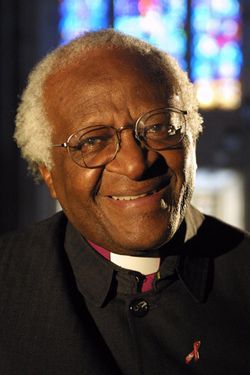 Is this the face of anti-Semitism? The University of St. Thomas seems to think so
Image by Courtesy the Desmond Tutu Peace Foundation. Photo by Benny Gool

Back in April, when University of St. Thomas staffer Mike Klein informed his colleagues in the Justice and Peace Studies program that he’d succeeded in booking Archbishop Desmond Tutu for a campus appearance, the faculty buzzed in anticipation. For a program dedicated to fostering social change and nonviolence, there were few figures who embodied that vision more aptly than the world-renowned civil rights activist and Nobel Laureate.

Tutu’s appearance-slated for the spring of ’08-was made possible by the university’s partnership with PeaceJam International, a youth-centered project that taps Nobel Laureates to teach young adults about peace and justice. For four straight years, the Catholic university’s St. Paul campus had played host to PeaceJam festivities featuring Nobel Peace Prize winners such as Rigoberta Menchú Tum and Shirin Ebadi.

But in a move that still has faculty members shaking their heads in disbelief, St. Thomas administrators-concerned that Tutu’s appearance might offend local Jews-told organizers that a visit from the archbishop was out of the question.

“We had heard some things he said that some people judged to be anti-Semitic and against Israeli policy,” says Doug Hennes, St. Thomas’s vice president for university and government relations. “We’re not saying he’s anti-Semitic. But he’s compared the state of Israel to Hitler and our feeling was that making moral equivalencies like that are hurtful to some members of the Jewish community.”

St. Thomas officials made this inference after Hennes talked to Julie Swiler, a spokeswoman for the Jewish Community Relations Council of Minnesota and the Dakotas.

“I told him that I’d run across some statements that were of concern to me,” says Swiler. “In a 2002 speech in Boston, he made some comments that were especially hurtful.”

During that speech, titled “Occupation Is Oppression,” Tutu lambasted the Israeli government for its treatment of Palestinians in occupied territories. While a transcription clearly suggests his criticism was aimed at the Israeli government (“We don’t criticize the Jewish people,” he said during the speech. “We criticize, we will criticize when they need to be criticized, the government of Israel”), pro-Israeli organizations such as the Zionist Organization of America went on the offensive and protested campus appearances by Tutu, accusing him of anti-Semitism.

Hennes says the input officials received from “the Jewish community” in this case was confined to Swiler and a few rabbis teaching within St. Thomas’s Center for Jewish-Christian Learning. “I think there’s a consensus in the Jewish community that his words were offensive,” Swiler reiterates.

That was news to Marv Davidov, an adjunct professor within the Justice and Peace Studies program.

“As a Jew who experienced real anti-Semitism as a child, I’m deeply disturbed that a man like Tutu could be labeled anti-Semitic and silenced like this,” he says. “I deeply resent the Israeli lobby trying to silence any criticism of its policy. It does a great disservice to Israel and to all Jews.”

University brass caught wind of the letter, and on August 1, Tom Rochon, executive vice president of academic affairs, sent a letter of his own to Toffolo informing her that St. Thomas administrators had decided to revoke her position as chair of the Justice and Peace Studies program.

Asked about the reasoning behind the demotion, Rochon and Hennes decline to comment. Toffolo herself is hesitant to offer any statements about it due to the sensitivity of her situation, though she did confirm that her letter to Tutu was the catalyst for her demotion.

“This is pure bullshit,” says Davidov. “As far as fighting for civil rights, I consider Tutu to be my brother. And I consider Cris Toffolo to be my sister. They’re messing with my family here. If Columbia permits a Holocaust denier [Iranian President Mahmoud Ahmadinejad] to speak at their university, why are St. Thomas officials refusing to let Tutu, an apostle of nonviolence, speak at ours?”

Davidov and other professors maintain that the situation at St. Thomas is emblematic of a larger issue.

“What happened at the University of St. Thomas is not an isolated event,” says Toffolo. “Until we have an honest debate about U.S. policy related to Israel, and about Israeli policy in the Occupied Territories, the spiral of violence will continue.”

Home:www.citypages.com
City Pages is the Online News and Arts Weekly of the Twin Cities