Will the Boycott-Israel Clique Co-opt the Scientific Community?

The hard sciences once seemed immune to the politics that dominate the humanities in academia, but no longer. 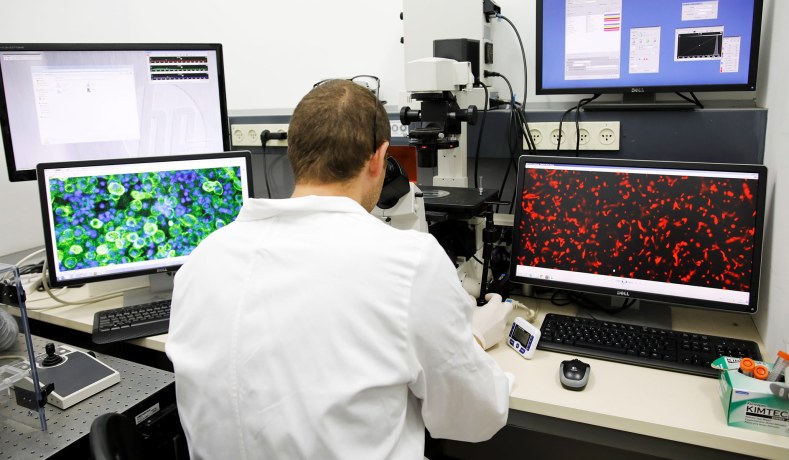 Last year, after chemistry professor Mindy Levine was invited to guest-edit a special issue of the journal Molecules, a group dedicated to the academic boycott of Israel briefly persuaded the journal to rescind the offer unless she consented to removing “Israel” from her published address: “Ariel University, Ariel, Israel.” When she refused, the special issue was canceled, and Levine was scrubbed from the journal’s website.

The protesting group, called the Ariel University Non-Recognition Campaign, wanted Levine’s address listed as “Ariel University, illegal Israeli settlement of Ariel, Occupied Palestinian Territory.” The journal eventually reinstated Levine as guest editor and issued a “Statement of Political Neutrality with Regards to Affiliation of Scientists at Ariel University,” but her case illustrated briefly, and perhaps is a harbinger of, something many thought couldn’t happen — science bending to the will of political ideology.

The hard sciences once seemed immune to the politics that dominate the humanities and social sciences, but no longer. A growing assemblage of scientists has singled out Israel as the one nation on earth that must be excluded from all normal contact with other nations, and the movement is not merely a phenomenon of the fringe blogs: Molecules is a peer-reviewed journal published in partnership with the Swiss Chemical Society in Basel, Switzerland.

Humanities academics were the vanguard of the movement against Israel, led by Edward Said, the English professor whose book Orientalism (1978) inspired many followers and imitators. Another milestone came in 2001, when the United Nations World Conference against Racism, Racial Discrimination, Xenophobia and Related Intolerance, in Durban, South Africa, gave rise to the trope that Israel is like apartheid South Africa. This inapt analogy of Israel’s self-defense and South Africa’s apartheid regime has become the chief rhetorical weapon in the academic offensive against Israel. Nearly every other hyperbole levied against Israel also originated through the conference’s NGO–academic alliance, which eventually evolved into the BDS movement.

In 1996, NYU physicist Alan Sokal proved that science is not immune to the excesses of postmodernism when he duped Duke University’s peer-reviewed journal Social Text into publishing an absurd deconstruction of reality, confirming that pseudo-scientific nonsense could be passed off as wisdom. But it was the humanities and social-science professors who popularized the anti-Israel boycott movement: Judith Butler, Gil Anidjar, Hatem Bazian, Joel Beinin, Lisa Duggan, Richard Falk, Stephen Walt, and others. Still, by the end of the 20th century, the STEM fields remained untouched by the politics that had colonized much of academia.

That changed in 2004 when physicist Peter Higgs (of Higgs boson fame) refused to travel to Israel to accept the prestigious Wolf Prize in physics. According to several reports, Higgs was angry that Israel had killed Hamas leader Ahmad Yassin, but he didn’t sign any BDS statements or lend his name to the cause. As Lazar Berman puts it, he “allegedly pushes BDS, but the evidence is nearly as elusive as the particle that bears his name.” Even Higgs’s harshest critics claim somewhat vaguely that he “effectively calls for academic boycott of Israel.”

Higgs is among the most important figures in the world of physics, but he eluded the media and popular culture. Doing the opposite arguably made Stephen Hawking the world’s most famous physicist, perhaps even its most famous scientist. In May 2013, when he pulled out of a conference in Jerusalem, the New York Times headline blared, “Stephen Hawking Joins the Boycott Against Israel.” He was reportedly persuaded to do so by MIT linguist and anti-Israel activist Noam Chomsky and members of the British Committee for Universities of Palestine (BRICUP), which effectively functions as the U.K.’s arm of the BDS movement.

The evidence is mixed. Pew Research and other polls indicate that “public confidence in the scientific community has remained stable for decades” and that scientists are far more trusted than journalists, educators, and politicians. This suggests that a major influx of scientists could strengthen the BDS movement.

Others believe that public faith in scientists amounts to only “soft support,” and that the more people know about science, the more likely they are to be “concerned about biases that may cloud scientists’ thinking.” If so, then scientists are no more likely than anthropologists, historians, or English professors to salvage the dying cause.

Will the Boycott-Israel Clique Co-opt the Scientific Community?

The hard sciences once seemed immune to the politics that dominate the humanities in academia, but no longer.