On April 16, 2018, the Durham North Carolina City Council passed the “Israel Resolution” making Durham the first city in the United States to boycott police training specifically with Israel. This took place even though Durham conducted no police training with Israel, and had no plans to do so.

It was purely an anti-Israel symbolic act designed to demonize Israel, as part of a broader racist, anti-Semitic campaign under the banner of “Deadly Exchange” to falsely blame Israel for policing problems, including shootings, in minority communities in the United States.

I have recently learned that one of the key players supporting the boycott on the Durham Human Relations Commission, which rejected a challenge to the City Council action, had campaigned for a City Council member who also advocated the boycott.

This began on April 5, 2018 when local activists led by the anti-Zionists of Jewish Voice for Peace (JVP) petitioned the City Council demanding that Durham ban police trainings with Israel. Activists, many of them college students, asked the Council to act quickly so they could leave town for summer vacation.

Despite massive opposition from the mainstream Jewish community and allies, the City Council took just 11 days to comply with JVP’s demands. 11 local rabbis published a statement calling the Council’s actions a “punch in the gut” to the Jewish community.

Six out of seven Council members had signed the JVP-led petition before their political allies had presented it to the Council. In the bizarre world of Durham politics, the City Council had lobbied itself. Consequently, the Council is now facing three lawsuits. Mayor Pro Tempore and well-known anti-Israel activist Jillian Johnson even told Jewish leaders that she helped the JVP-led activists write the petition so it would be more palatable to the City Council.

The Jewish Federation of Durham-Chapel Hill and Voice4Israel (I am a board member of the latter) jointly filed a complaint in May of 2018 with the Durham Human Relations Commission (HRC). The HRC subcommittee tasked to research our concerns responded with a draft report asking the Council to remove the singling out of Israel from their April 16 statement. Then the full HRC rejected its own subcommittee’s report, refusing to condemn the Council’s anti-Semitic targeting of Israel.

Four members of the Durham HRC, including Commission Chair Diane Standaert and Commission Vice Chair John Rooks, signed the anti-Israel petition given to the Durham City Council in 2018. All four are now named in a lawsuit filed by the North Carolina Coalition for Israel and other parties for allegedly “not reveal[ing] their conflict of interest.”

Since then, I have recently uncovered a 2015 photo of Standaert campaigning for City Council member Jillian Johnson. The photo appears multiple times on Johnson’s official Facebook page.

It appears that Standaert was an HRC commissioner while her photo was being used to support the Johnson candidacy. It’s troubling for a commissioner to take such an active partisan position publicly considering that commissioners are sometimes called upon to consider situations – such as the Israel Resolution – that directly relate to the actions of the City Council. 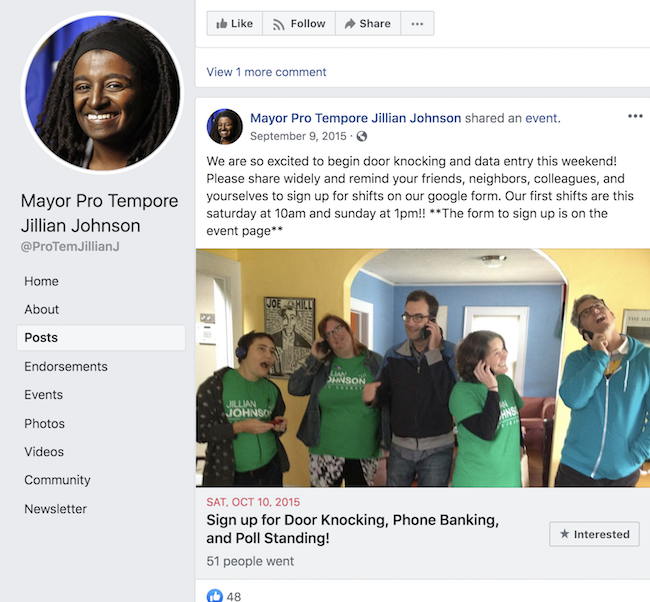 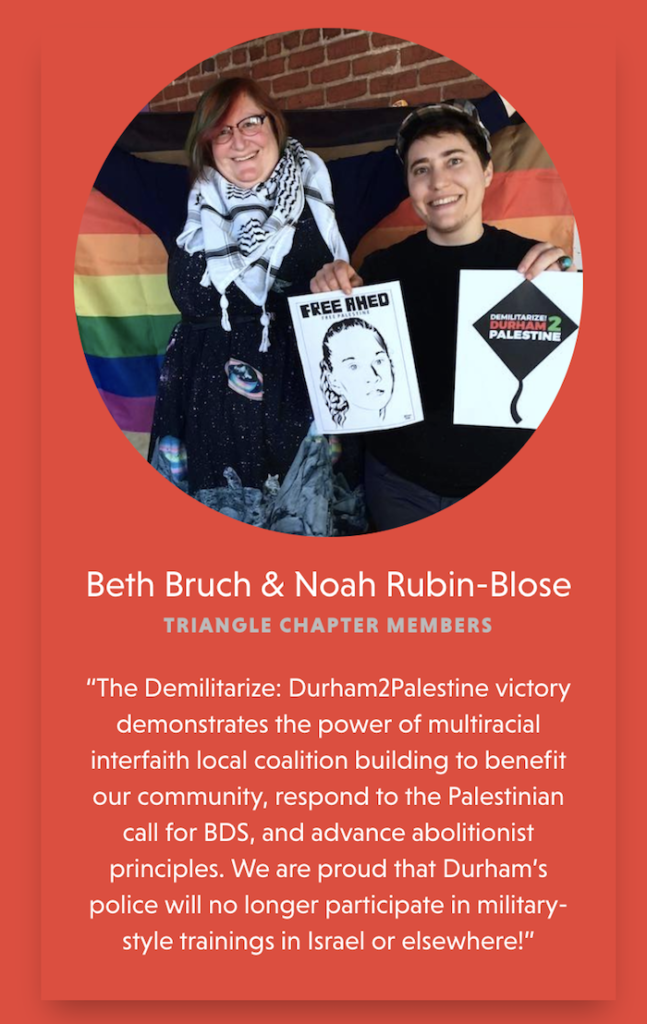 Bruch was the first to speak at Durham City Hall in favor of boycotting police training with Israel. Saying she was quoting a friend, Bruch told the Council, “We know Israel is the last country in the world to respect human rights.” Bruch added that if the Durham police were to train in Israel, “They’re going to come back as killers.”

Furthermore, I attended the relevant HRC meetings and conference calls and have reviewed hundreds of pages of Durham HRC related public records on this matter. To my knowledge, Standaert never publicly acknowledged her close ties to Council member Johnson and local JVP leaders. Failing to acknowledge such a conflict of interest feels like a betrayal to those of us who were asking for and expecting an unbiased opinion on the matter.

At one HRC meeting, I was standing with a local Jewish leader who politely asked Standaert if she had a conflict of interest on this matter. Standaert said no, never offering that she campaigned for Johnson side by side with JVP leaders. Standaert apparently did not even think it was relevant to tell us that she (along with three other HRC commissioners) had signed JVP’s anti-Israel petition given to the City Council. We only found this out because I made a public records request for a copy of the petition and found Standaert’s name and the names of three other commissioners on it.

When asked why she did not recuse herself from participating and voting during HRC deliberations regarding the Israel Resolution, Standaert responded to me:

Nothing about serving on a Commission requires a chilling of someone’s freedom of speech, including the right to participate in local elections or other activities. But, to answer your question: Yes, that is me in the photo as a volunteer. No, I do not recall having donated to any of the organizations you mention below. Nothing of what you ask about below does or would violate the code of ethics for Commissioners nor meet the standards for conflict of interest or recusal per our bylaws. Also, the link you provided below is for the employees of the city of Durham, so no, I am not subject to that.

This is a highly strained interpretation of the first amendment wherein she claims that her civil rights would be abridged if she, a person charged with making a judgment, should reveal a potential bias and conflict in a hearing over which she is presiding. Despite Standaert’s history of open support for Council person Johnson, she insisted on remaining active by ruling on our appeal about that Council person’s judgment and vote.

Should the Entire Durham HRC Have Recused Itself?

As mentioned, four HRC Commissioners, including the Chair and Vice Chair, signed the JVP-led anti-Israel petition given to the Durham City Council. In addition, I have recently discovered that HRC Commissioner Nadiah Porter publicly supported the Israel Resolution. As far as I know, this was never disclosed during public HRC meetings. 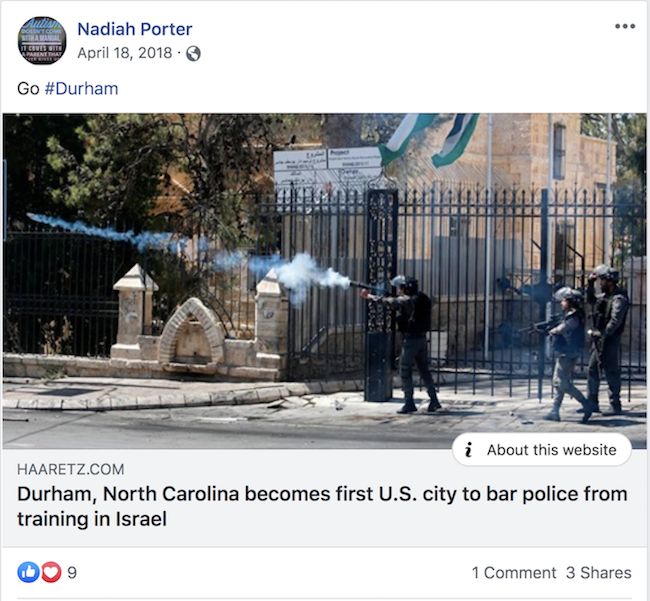 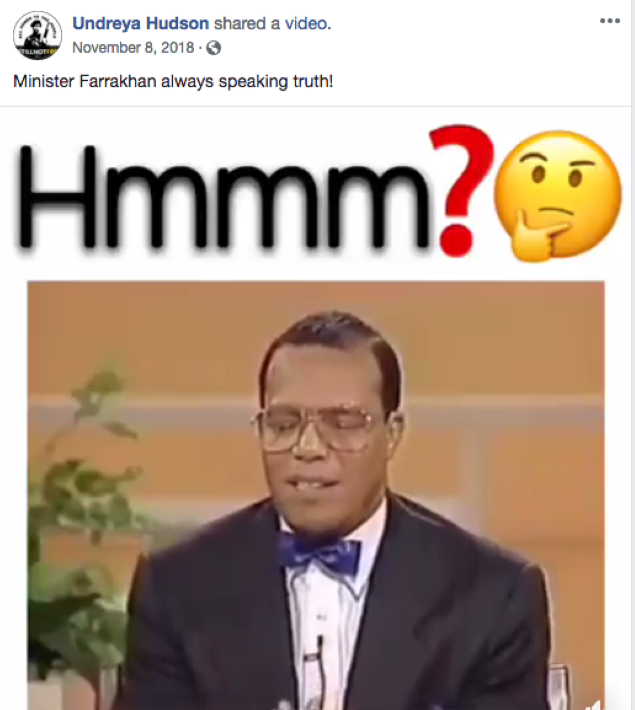 Hudson led the charge in having the HRC reverse itself to reject its own subcommittee’s condemnation of the City Council’s anti-Semitism. Hudson promoted the bizarre position of comparing the April 16 anti-Israel City Council statement to the bible and stated that even if HRC commissioners disagreed with the statement, they should not ask for the Council to change a policy it had written because, like the bible, the policy had already been written.

In addition, I have discovered that HRC Commissioner Brian E. Kennedy, II has tweeted, “I’m tried [sic] of Israel being the America’s ‘favorite child.’” Kennedy even dabbled in trivializing the Holocaust when he tweeted in 2015, “#Trump is literally reenacting Nazi Germany.”

Now we know that at least six HRC commissioners appear to have been biased against Israel and at least five of these commissioners were supportive of the Durham City Council’s Israel Resolution when they heard our complaint.

This raises the question: Should the Durham Human Relations Commission had recused itself from hearing our complaint because of anti-Israel bias or the perception of bias? If the Durham HRC had been more forthcoming on this issue, there could have been a serious public discussion on the matter. For example, the HRC may have ended up recommending that a truly independent commission be assembled to hear our complaint.

Several days after Commissioner Standaert responded to my questions, Commissioner Rooks emailed me on July 30, 2019, “As this matter is currently still in litigations, I’m going to make the formal request that going forward all your questions or concerns be directed to the attorneys handling this matter.”

In nearby High Point, NC, the Human Relations bylaws recognize that even volunteers are required to be respectful of the need to exclude bias from a hearing in which they might preside: “Commissioners must avoid any activity that might impair or impugn the independence, integrity or impartiality of the Commission. There must be no apprehension of bias, based on what a reasonable person might perceive.”

If Standaert and others involved in voting on the anti-Israel resolution held themselves to such common-sense conflict guidelines as these, they would have needed to recuse themselves from all deliberations and voting on matters related to the “Israel Resolution.” That recusal did not happen.

If Durham had a clear and strong conflict of interest policy for HRC commissioners, it is likely that the current litigation which names the commissioners could have been avoided. Instead, many in the mainstream Jewish community and allies feel deceived and mistreated by the HRC’s handling of the Israel Resolution. It is in everyone’s best interest for Durham to step up and provide ethical guidance to its committees and volunteers.