The right (and wrong) way to defeat BDS on campus

With anti-Israel activism often rooted in misinformation, pro-Israel groups must make it a priority to educate by sticking to the facts, presenting them clearly and staying unified.

The Boycott, Divestment and Sanctions campaign against Israel has been a thorn in the side of Jewish and pro-Israel students on college campuses for more than a decade. Where BDS rears its ugly head, anti-Semitism in the form of intimidation and violence towards Jewish students almost always follows. Claims that BDS is a non-violent movement are patently false. 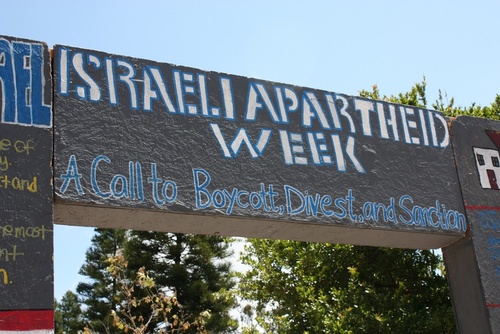 A sign for “Israeli Apartheid Week,” the annual international anti-Israel showcase on the campus of the University of California, Irvine, in May 2010. Credit: AMCHA Initiative.

With most college campuses serving as nurturing grounds for the far left, progressive groups hijacked by anti-Israel propaganda are dominating campus life, spewing hatred for Zionists and the Jewish state.

In just the last few months, we’ve witnessed both the right way and the wrong way to defeat BDS on campus. The key to victory is unity—Jewish students, Christian groups and pro-Israel organizations working together. When Jewish leaders and groups are divided or distracted by other political causes, BDS will almost certainly prevail.

The Jewish and pro-Israel organizations at the University of Illinois exemplify the right way to defeat BDS.

By nearly a 2-1 margin—3,133 votes against and 1,700 votes for divesting from the Jewish state—students at the educational institution’s Urbana-Champaign campus handily defeated “a discriminatory referendum” that called for divestment from companies doing business with Israel.

Such overwhelming victories are simply unheard of.

“The idea was that these student groups all worked together to defeat this,” explained Illini Chabad Rabbi Dovid Tiechtel to the Haym Salomon Center. “And by working united, we not only defeated it; we defeated it 2 to 1!”

With anti-Israel activism often rooted in misinformation, pro-Israel groups made it a priority to educate by sticking to the facts and presenting them clearly—other fundamental ingredients in defeating BDS.

“The big BDS fail at the University of Illinois is an example of what happens when facts enter the conversation about the Middle East,” said StandWithUs Midwest director Peggy Shapiro. “With solid information in hand, students realized that the anti-Israel referendum was not pro-peace, not pro-coexistence and not even pro-Palestinian; that it was, in fact, thinly veiled anti-Semitism. They voted ‘NO!’ The defeat is an example of education being the road to peace.”

If there is one organization that success is predicated on, it’s the campus Hillel. The oldest and largest Jewish organization on campus often serves as the center of Jewish life for students. At Illinois, Hillel did not disappoint.

“Hillel students led a campaign, ‘United Illini for a United Campus,’ focused on a positive message of campus values, unity and close collaboration with diverse campus organizations, university leadership and faculty, and community partners,” said Erez Cohen, executive director of Illini Hillel. “They were so successful in showing our community the value of maintaining and creating new relationships with Israeli institutions that the referendum failed by more than 1,400 votes.”

In contrast, at the University of Michigan in Ann Arbor, unity, leadership and prioritizing support for Israel took a backseat, according to pro-Israel organizations and activists on the ground.

Like the majority of college students, Jewish kids tend to be left of center politically. Many can be classified as leftists or progressive. This is problematic for these students who support Israel because progressive groups are almost always anti-Israel, having bought into the lie that “Zionism is racism.”

So why would a Jewish organization that supports Israel partner with or even fund organizations that are vehemently anti-Israel and often anti-Semitic?

According to recent University of Michigan graduate Jesse Arm, who served on the Hillel governing board in 2016, “the board is traditionally very quick to help fund and co-sponsor events with other progressive student organizations that exist outside of Hillel and are consistently supportive of BDS measures. These sponsorships are often approved by the student board not because Hillel students play an active role in the planning or execution of the events, but because Hillel board members fear being perceived negatively if they say no to such requests.”

Arm added that “part of the reason such sponsorships are approved is in the hope that the next time around, the groups and individuals benefiting from the sponsorship may reject a BDS measure. This line of thinking never pans out.”

He believes that progressive Jewish students have to accept some responsibility for the outcome of the BDS vote, noting that in student government elections last spring, the vast majority of Jewish students on campus supported a party with a pro-BDS executive candidate.

“Jewish students’ opposition to BDS was tacit rather than any fervent support for Israel,” said Arm. “Led by the university’s Hillel, kid after kid was sent up to the front of the room at the student government meeting to apologize for Israel’s crimes and faults, but then suggest BDS isn’t the answer.”

He laments that although plenty of organizations on the Michigan campus want to partner with Hillel to combat BDS, “partnering with conservative or Christian groups is anathema to Michigan Hillel and its staff.”

Arm’s perspective was confirmed by another student, who asked to remain anonymous. This individual feared retribution by Hillel leadership and progressive students on campus.

Many people who spearheaded the movement against the BDS initiative helped elect the president and the vice president, who openly supported BDS. Naively, these students and Hillel leaders thought that forming a relationship with them would, in the long run, tip the scales in their favor.

The anti-BDS movement failed because they tried to play into their rhetoric by stating that Israel does all these terrible things and we agree with you, but BDS is not the answer. During the meeting, you sometimes couldn’t tell who was pro-Israel or anti-BDS because both sides were disparaging of Israel. White Jews such as myself were told not to speak against divestment at the meeting. It apparently made for bad optics.

One student who does not agree with the accusations against Hillel is Michigan freshman Benjamin Gerstein.

The accusations against Hillel hold zero truth. From sitting in on the Israel cohort meetings and watching as Hillel’s Israel team meticulously planned the counter-divestment effort, I know for a fact that Hillel worked hard to prevent divestment’s passage and took divestment very seriously.

They held teach-ins and made sure there was a Jewish presence at [Central Student Government] meetings. Divestment’s passage had nothing to do with the efforts of Hillel. The Hillel leadership is supportive to all of Michigan’s Jewish and pro-Israel students, and in no way was exclusive based upon political opinion. A plethora of Jewish voices were heard from all different backgrounds. Hillel’s counter-divestment efforts were well thought out, inclusive, and planned with care and passion.

According to Tilly Shames, executive director of University of Michigan’s Hillel:

Michigan Hillel, alongside our partners, have worked tirelessly for more than a decade to defeat BDS resolutions each time they were brought to student government. We have convened a diverse array of anti-BDS student leaders to combat the fallacies and tactics of this movement. We have provided advocacy and educational tools for students to express their opposition and galvanize their peers, along with emotional support for our students during these difficult times. I have personally worked with and supported a diverse array of pro-Israel organizations in formulating and implementing strategy to push back against Israeli divestment.

Nonetheless, a number of students accuse Shames of “pulling strings” so that only progressive voices were permitted to address the Central Student Government during the BDS debate. Students with a more conservative voice with regard to the Jewish state were allegedly shut out.

While it’s no surprise that various Jewish students and pro-Israel groups have different perspectives on what took place at the University of Michigan, such harsh criticism of Hillel and its leadership reveals that, at the very least, a united front against BDS did not exist.

While each campus may have its own culture, only schools with a left-of-center student body would even consider supporting BDS. It is progressives who buy the lies about Israel. And that is why, as we saw at the University of Illinois, a united front using facts to educate the students is the key to defeating BDS on campus.

Paul Miller is president and executive director of the news and public-policy group Haym Salomon Center. Follow him on twitter @pauliespoint.

The right (and wrong) way to defeat BDS on campus

With anti-Israel activism often rooted in misinformation, pro-Israel groups must make it a priority to educate by sticking to the facts, presenting them clearly and staying unified.