The entire idea of librarians supporting boycotting Israel is an oxymoron. How can people who are dedicated to acquiring, categorizing and disseminating knowledge even consider boycotting an entire nation of people who are so instrumental in creating that same knowledge?

Yet a group of Israel-hating librarians recently visited “Palestine” to drink up and then regurgitate the lies being fed to them by their propaganda-spewing hosts.

It is remarkable that self-described librarians can write a paragraph like this with a straight face:

We are an independent group of librarians and archivists who traveled to Palestine from June 23 – July 4, 2013. We come from the US, Canada, Sweden, Trinidad & Tobago, and Palestine. We bore witness to the destruction and appropriation of information, and the myriad ways access is denied. We were inspired by the many organizations and individuals we visited who resist settler-colonialism in their daily lives. … In all our travels and work, we respected the Palestinian civil society call for boycott, divestment, and sanctions (BDS) against Israel and did not partner with any organization that violates this call. As librarians and archivists, as people who believe in access to information, we affirm that institutional academic and cultural boycotts are appropriate responses to curtailed freedoms and are effective tools for change.

Librarians who voluntarily censor others’ opinions are not librarians.

As a result of their indoctrination during their trip, you can see howlers like this on their blog:

[A]bout 25% of Israelis in pre-67 borders are Palestinians, who are “residents” of Israel, but denied citizenship and legally discriminated against, thus it is important to distinguish between Israelis and Israeli Jews…

These librarians are so brainwashed that they believe that there are no Arab citizens of Israel!

If they had bothered to speak to any Israeli, they could have found out that they were taught and then spread lies, which should bother any real librarian. Actually, if they would have bothered to read any booksabout Israel they would have known that this was nonsense. However, these “knowledge workers” prefer to work without knowledge. Their BDS overlords told them to boycott any books that tell actual truth about Israel.

The group happily posed with drawings of terrorists: 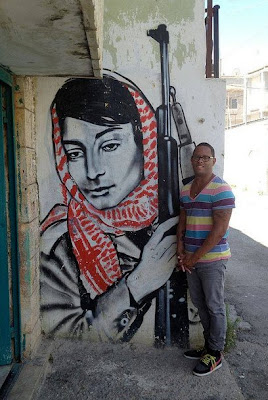 Another photo they proudly took symbolizes the ethnic cleansing of Jews from their homeland (unless the graffiti is referring to the dog breed.) 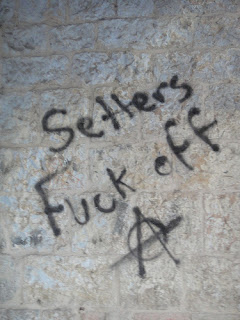 This photo of theirs shows a map that erases Israel and helpfully enshrines violence with the PFLP logo along with two rifles: 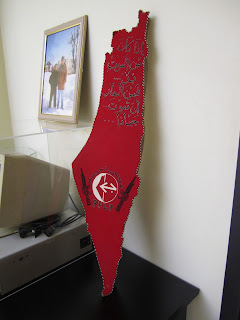 Support for violence? Spreading lies? Romanticizing terrorism? What kind of “librarians” are these, anyway?

Indeed, these “librarians” have no problem violating their own code of ethics:

The core mission of librarians and other information workers is to ensure access to information for all for personal development, education, cultural enrichment, leisure, economic activity and informed participation in and enhancement of democracy….Librarians and other information workers are strictly committed to neutrality and an unbiased stance regarding collection, access and service. They seek to acquire balanced collections, apply fair service policies, avoid allowing personal convictions to hinder the carrying out of their professional duties, combat corruption and seek the highest standards of professional excellence.

One of the leaders of the group, although she didn’t participate in this visit, is “Jenna,” who wrote many of the blog posts on behalf of the tourists. Librarians for Fairness fills in the details:

Jenna’s father, whom we will refer to as Mitch, is one of the most prominent librarians in the world. He is also a former president of the American Library Association. We doubt that anyone would call Mitch an ardent Zionist, or for that matter, a Zionist. But Mitch accepts Israel’s right to exist. We believe Mitch to be a fair-minded man…

Mitch communicated to Jenna in December of 2012, during the early planning stages of Librarians and Archivists to Palestine. He asked Jenna if respecting the BDS Movement was a requirement for acceptance in the delegation. Mitch wisely asserted that if it was, that in and of itself would be “oppressive.” Well, we in LfF know that supporting the BDS Movement is, indeed, one of the mandates for inclusion in Librarians and Archivists to Palestine.And the BDS Movement (founded by Omar Barghouti, who, ironically, holds a graduate degree from Tel Aviv University) does, in fact, call for the annihilation of Israel. Mitch also expressed his view that the de-legitimization of Israel was “deeply wrong.” And he further pointed out that Israeli Arabs are treated a lot better than Jews in Arab lands have been treated, since the 1940’s. Moreover, in his criticism of BDS, Mitch noted that he does not see anyone doing a BDS against Saudi Arabia.

Jenna, why haven’t you listened more to the wise words of your Abba (Dad)? Jenna, do not your father’s admonitions indicate that he may very well feel that Librarians and Archivists to Palestine is more about de-legitimizing Israel, than helping Arab libraries and archives?

The vast majority of real librarians should be ashamed of this group.