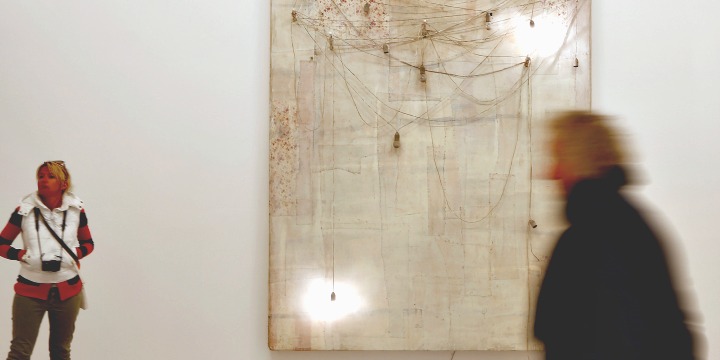 The Venice Biennale is one of the art world’s most prestigious exhibitions. Photo: Reuters / Stefano Rellandini.

A prominent French-Algerian artist on Thursday strongly distanced herself from the movement to boycott Israel, defusing a brewing row over the decision to have her represent France at the prestigious Venice Biennale art show.

The Paris-born Zineb Sedira said that allegations that she was tied to the so-called BDS (boycott, divestment and sanctions) campaign targeting Israel were “slanderous and unfounded.

“I have never had any acquaintance with this movement,” Sedira said in a statement. “I also firmly condemn any boycott, and I cannot be associated with or stand in solidarity with BDS. I oppose BDS and any global boycott that would have the counterproductive effect of paralyzing women and men who want to live in peace.”

The artist was responding to charges that she had objected to her works being exhibited in Israel in June 2017. According to a report at the time in the Israeli newspaper Haaretz, Sedira and four other artists of Arab origin had demanded that their works be pulled from a show in the Israeli-Arab town of Sakhnin. The article did not quote Sedira directly, however.

In her statement on Thursday, Sedira  — whose work in photography and video explores the experiences of Arab women — emphasized that she was “an artist, not an activist.”

She added that she would “always endeavor to fight against all forms of hateful acts, or racist or antisemitic remarks.”

Among those welcoming Sedira’s statement against BDS was the leading French-Jewish philosopher Bernard-Henri Lévy, who had earlier protested against her appointment as France’s representative at the 2021 Venice Biennale.

“She now condemns BDS and all forms of discrimination and hatred: that is essential,” Lévy tweeted.