The Jewish Exception to Free Speech on Campus 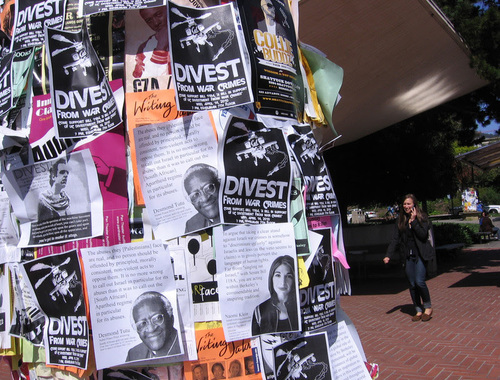 In 2012, the Electronic Intifada, an online anti-Zionist media outlet that aggressively promotes the anti-Israel Boycott, Divestment, Sanctions (BDS) movement, ran a lengthy article suggesting that “allegations of ‘anti-Semitism’ create a real climate of fear” that is “silencing” pro-Palestinian student activists on US campuses. I couldn’t stop laughing when I saw the article, not because of the absurd nature of the charges — that Jewish students were somehow intimidating and silencing pro-Palestinian student activists just by virtue of speaking up about the intimidation, and silencing they themselves were experiencing at the hands of those same activists — I laughed because of the accompanying photograph set beneath the headline. In one concise image, it revealed the utter disingenuousness of the thousand words that followed.

The photo, credited to Students for Justice in Palestine (SJP) at University of California Berkeley, depicted a large pole on campus that was covered from top to bottom with multiple layers of promotional flyers. However, the only ones that were fully visible — because they had been affixed directly on top of the others — were the SJP’s flyers demonizing and delegitimizing Israel and urging the university community to support BDS. The juxtaposition of the photo with its caption, “Students face a climate of intimidation on several California campuses,” practically begged the reader to think: Which students are facing a climate of intimidation?  Certainly not the members of SJP, whose bold and brazen “freedom of expression” to demonize and delegitimize Israel and promote efforts to harm it is literally smothering everyone else’s!

In the four years since that article was published, the smothering of speech depicted in the article’s photo has not improved. In fact for one group of students, it has gotten worse. Much worse.

A study of antisemitic activity in 2016 on more than 100 campuses, which our organization released earlier this week, revealed that over the past year the number of incidents involving the suppression of Jewish students’ freedom of speech and assembly by members of SJP or other anti-Zionist student groups had approximately doubled. For example, in April of this year, more than two dozen members of the General Union of Palestine Students at San Francisco State University disrupted and ultimately shut down a Jewish student event featuring a speech by Jerusalem Mayor Nir Barkat. A few minutes after Barkat’s speech had begun, protestors stormed into the hall and loudly chanted slogans such as “Get the hell off our campus,” “Long live the Intifada,” and “From the River to the Sea, Palestine Will be Free,” until the speech was prematurely terminated. Similar disruptions and attempted shut-downs of Jewish student events unfolded on campuses across the country.

In addition, the increase in incidents which trample on the civil rights of Jewish students indicates the growing success of a tactic known as “anti-normalization,” which members of SJP and similar anti-Zionist groups routinely employ to aggressively stifle all pro-Israel expression. For example, in one of its founding documents the SJP group at Binghamton University outlined strategies for harassing Jewish students and disrupting or shutting down their Israel-related events in a section entitled: “Tactics and Strategies Used to Counter Zionist Normalization.”

Adherents of “anti-normalization” target not only pro-Israel students, but anyone presumed to support Israel, first and foremost Jewish students, regardless of their actual personal feelings on Israel. As a result, Jewish students engaging in Jewish activity having nothing to do with Israel — wearing their Jewish sorority or fraternity letters, displaying Star of David necklaces, walking to Hillel for Sabbath dinner – report fearing for their safety and well-being.  In addition, because of their support, or even just presumed support, for Israel, Jewish students report being rejected from progressive social justice activities such as pro-choice rallies, anti-rape demonstrations, Black Lives Matter events and racial justice conferences.

The situation has become intolerable for many Jewish students.

This past spring, the University of California system took a critical stand against the rising antisemitism plaguing its 10 campuses. Its Board of Regents issued a Statement of Principles Against Intolerance acknowledging that anti-Zionism is a form of antisemitism which incites additional Jew hatred and, like other forms of discrimination, has no place at the University of California system. The Regents’ statement also singled out “actions that physically or otherwise interfere with the ability of an individual or group to assemble, speak, and share or hear the opinion of others,” stating that they “impair the mission and intellectual life of the University and will not be tolerated.”

The Jewish Exception to Free Speech on Campus