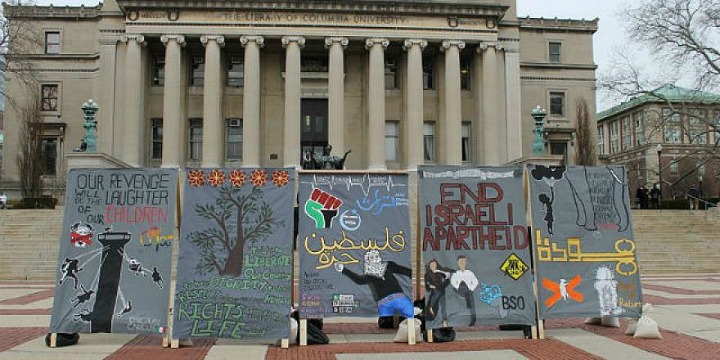 In the post-truth world, Hamas apparently no longer exists. Thousands of rockets and incendiary balloons no longer fall on Israeli towns and cities, killing people in their apartments, obliterating vehicles, and setting fields ablaze.

According to numerous academic departments here and abroad, Israel is no longer under assault. In the post-truth world, Israel and its military have instead become irrational opponents of all that is just and good, carrying out raids on Hamas strongholds in Gaza without cause or justification.

No wonder those academic departments have substituted self-congratulatory virtue signaling for academic freedom and open debate.

In May of this year, immediately after the most recent war between Hamas and Israel ended, over 100 academic departments representing their colleges and universities, for the first time in history broke with the established academic principle of departmental and university political neutrality, issued statements condemning Israel, and, in effect, joined the BDS movement.Related coverageOctober 27, 2021 12:31 pm0Gaza 2021: How Biden Handled His Far-Left Hamas Caucus Problem

Many women’s studies programs started the campaign, but some ethnic studies, history, and other departments joined it. Even during the Vietnam War, when by the 1970s most professors opposed the war, their departments stayed out of politics. By the mid-1970s, some voluntary professional associations took an anti-war stand — but not, as far as I can determine, university departments. Most departmental and academic statements this spring did not even mention Hamas.

The most influential guiding principle is clear: individual faculty, students, and staff are free to express and promote their political views. They can create voluntary groups to do so collectively. But official university units must not do so. Otherwise, all those affiliated with a department would suffer the coercive effect of anti-Zionist or other political groupthink.

But that is not the only danger. University departments and programs have to make supposedly objective decisions when they admit students, hire faculty and staff, award fellowships, rank grant proposals, approve sabbatical applications, make tenure and promotion decisions, and carry out other official duties. And their faculty members should not have to grade students in their courses under the shadow of official department anti-Zionism. Everything associated with the Jewish state is compromised by politicized university units.

As one would expect, faculty sympathetic to Israel have found this trend both distressing and threatening. They are worried for themselves, their colleagues, and their students. In recent weeks, faculty across the country — both individually and collectively — have written to their senior administrators to express their concern, clarify campus policy regarding departmental politicization, and urge administrators to act to protect academic freedom.

In Orwellian fashion, those siding with BDS have insisted that their academic freedom gives them the right to restrict the academic freedom of others. That is a complete betrayal of the principle. And yet there seem to be no administrators willing to say so.

Several California campuses are among those where faculty wrote to administrators about this major threat to academic standards of conduct. The responses have followed a pattern. Provosts and chancellors wrote back to thank the writers for their views and suggested the campus would study the problem. But they would go no further in addressing the issues at stake. Fear of the campus anti-Zionist lobby seemed to carry the day.

Events on my own campus, the University of Illinois at Urbana-Champaign (UIUC), took a somewhat different route. Several of us wrote individual letters of concern to the administration after four UIUC departments issued anti-Zionist statements and committed themselves to anti-Zionist decision-making and action. It was the first time in 50 years here when a letter I sent to senior campus administrators received no reply at all, not even an acknowledgment of receipt.

One of my colleagues in another department, the College of Law, decided to take the next step, drafting a group letter and soliciting signatures to it. Sent in September, it too seemed to fall into a void. But four weeks later, a response finally came to the 44 of us who had signed his letter. The response signed by the chancellor and provost surprised and disappointed us.

There was the usual reference to academic freedom and the promise to look into the matter. In what is often an empty assurance, especially for large institutions like this one, we were assured that all stakeholders could participate in the conversation and have meaningful input. But then the response took an alarming turn, assigning that matter to shared governance instead of academic freedom.

Shared governance represents the elaborately negotiated agreements through which faculty departments have a say in developing campus policy. Unlike academic freedom, its governing rules are far from universally agreed upon either in the US or other countries.

Whether wittingly or not, my chancellor and provost were crediting departments with a role in establishing campus policies about Israel. Instead of prohibiting departments from standing with or against BDS — both of which are inappropriate — they were opening the door to blatant politicization. To be clear, I do not believe academic units should be for or against Israel or its policies. That is not their role. Universities as a whole shouldn’t be either; their job is to help maintain lines of communication between faculty and students worldwide, including those in Israel and the US.

Did departments themselves think through the implications of taking formal political positions? I cannot say. But now that the prohibition has been breached, the Israel-Palestinian conflict will not be the last topic so addressed. It will not be the only time faculty are tempted to use their department’s authority to impose their political views on their colleagues.

Faculty feel passionately about many public policy matters. Programs and units, like medical schools, officially charged with serving non-university constituencies, certainly have a right to address pending legislation that will affect their ability to do their jobs — but that is clearly not the case here.

The formal politicization of academic programs will undermine both public confidence in and the overall mission of higher education. Anti-Zionism may be the tip of the spear in unwittingly pushing that agenda, but the troops who follow in its wake will have still other battles to fight. Society as a whole will suffer the consequences.

Cary Nelson is an emeritus professor at the University of Illinois at Urbana-Champaign. His most recent book is “Peace and Faith: Christian Churches and the Israeli-Palestinian Conflict.”