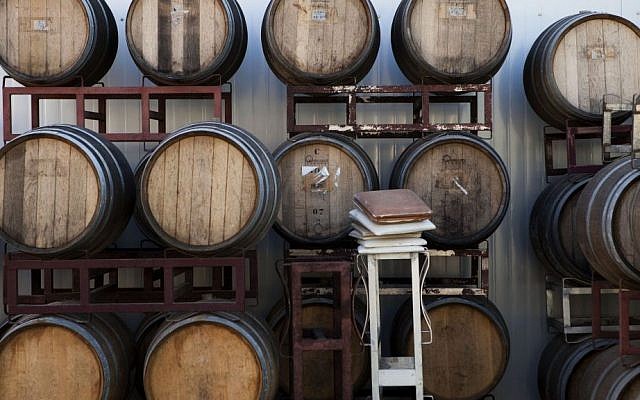 Barrels at an Israeli winery in the West Bank settlement of Psagot, February 11, 2014. (AP/ Dan Balilty/File)

Canada’s Federal Court on Monday ruled that wines produced by Israelis in the West Bank can no longer be labeled as “Made in Israel.”

Challenging a previous decision by the Canadian Food Inspection Agency, Judge Anne L. Mactavish determined that labels describing wines made in the settlements as Israeli products are “false, misleading and deceptive.”

In her ruling, she did not take a position on how exactly such wines should be labeled, saying this was for the Canadian Food Inspection Agency to decide.

Mactavish also noted that settlements are not considered part of the State of Israel, as Canada does not recognize Israeli sovereignty beyond the pre-1967 borders.

While the judge’s decision is legal and not political in nature, it could potentially strain otherwise strong ties between Jerusalem and Ottawa.

In 2015, the European Union said goods produced in the settlements must not be labeled as made in Israel. Many senior officials, including Prime Minister Benjamin Netanyahu, denounced the union for the move, suggesting that it was comparable to the Nazi boycott of Jewish goods before World War II.

The Canadian case started in early 2017, when David Kattenburg, a Winnipeg-based university lecturer and self-declared “wine lover,” filed a complaint with the Canadian Food Inspection Agency about the fact that wines made in Israeli settlements were labeled as “Products of Israel.”

Kattenburg, who is Jewish, reasoned that since Canada does not recognize the settlements as part of sovereign Israel, labeling wines produced there as Israeli violated consumer protection laws.

The Food Inspection Agency initially agreed and removed wines produced by the Shiloh and Psagot companies from store shelves. But after pressure from B’nai Brith Canada, which was recognized by the court as an “intervener” on behalf of the settlements, the decision was rescinded and the wines were made available again. One of the arguments from the decision underlined that the Canada-Israel Free Trade Agreement applies in “the territory where the customs laws of Israel are applied,” including the West Bank. 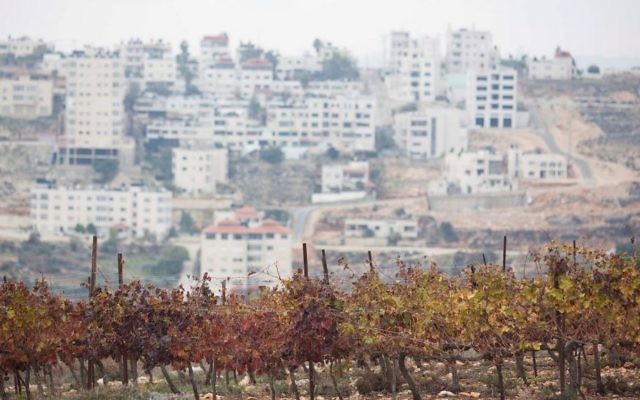 View of the fields at the Psagot vineyard in the West Bank, near the city of Ramallah, on December 13, 2012. (Yonatan Sindel/Flash90/File)

Kattenburg appealed the agency’s decision, and the case was brought to the Federal Court in Ottawa.

Allowing settlement wines to be marked as made in Israel does not fall “within the range of possible, acceptable outcomes which are defensible in respect of the facts and law,” she determined. “It is, rather, unreasonable.”

“It is our fervent hope that the government of [Canadian Prime Minister] Justin Trudeau will accept the Court’s well-reasoned decision and will not waste yet more taxpayer dollars by appealing this decision and by continuing to facilitate Israel’s naked theft of occupied Palestinian land,” Kattenburg’s lawyer, Dimitri Lascaris, wrote on his website.

Blogger Ali Abunimah, a bitter critic of Israel and declared anti-Zionist, went as far as calling the court ruling “historic.”

BREAKING: Canadian federal court has just issued historic decision that “Product of Israel” labels on goods from Israeli settlements in occupied land are "false, misleading and deceptive." @dimitrilascaris was the attorney in the case. pic.twitter.com/jwfoL1fp6e

Eugene Kontorovich, a US-Israel professor of international law, said the ruling was “wrong” and expressed hope the Canadian government would challenge it.

“The Canadian free trade agreement clearly makes products from Judea and Samaria [the West Bank] part of Israeli customs territory. And Canada labels wines from occupied Nagorno-Karabakh, ‘Made in Armenia’ — so this looks like another special rule for just the Jewish state,” he said in a statement.

“The sole basis of the ruling was that made in Israel labelling confuses consumers. But the court cited absolutely no evidence that any substantial number of consumers who might care one way or another about a product’s origin in Judea and Samaria are unaware of that fact.”

The Friends of Simon Wiesenthal Center expressed dismay over the ruling. “The Canadian Jewish community is very disappointed in today’s ruling. Claiming West Bank wines can’t be labeled ‘Made in Israel’ effectively endorses the anti-Semitic BDS campaign,” said the group’s head, Avi Benlolo, in a statement, referring to the anti-Israel Boycott, Divestment and Sanctions movement.

Israel’s Foreign Ministry did not respond to a request for comment by the time this article was posted.