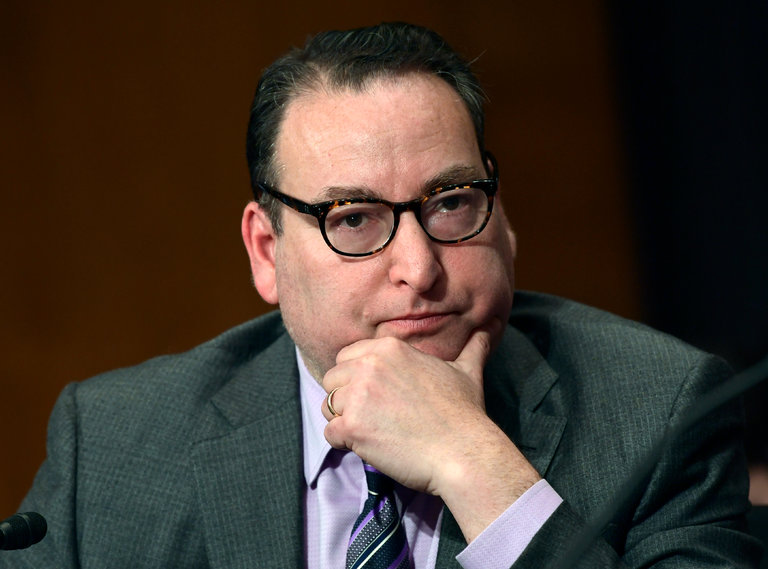 WASHINGTON — Students at the University of Wisconsin-Madison had gathered last spring to consider a resolution calling on the university to divest in companies and countries that abuse human rights, profit from the “military-industrial complex” and promote fossil fuels when the debate jumped the rails.

Soon, the students were in a full-scale battle over whether the resolution should cover Israel, with charges of anti-Semitism and racism rattling the room. A student representative who was Jewish said that the last-minute inclusion of Israel “crossed the line from legitimate conversation to a point where I consider it malicious.” The student government chairwoman, who is black, suggested the opposition to the resolution amounted to “white supremacy,” which she condemned with a four-letter expletive.

In the aftermath, Kenneth L. Marcus, the founder and president of the Louis D. Brandeis Center for Human Rights Under Law, decided to enter the fray, writing to university administrators to denounce calls for divestment from Israel as anti-Semitic, and to assail the meeting as hostile toward Jewish students. He urged that the black student leader be disciplined.

On Thursday, Mr. Marcus received the approval of the Senate Health, Education, Labor and Pensions Committee to be President Trump’s assistant secretary for civil rights in the Education Department, a prestigious post known more for policing racial bias and sexual violence in schools than refereeing the battles over Israel and Palestinian rights on the nation’s university campuses.

Critics see him as a biased crusader whose singular focus on what he believes to be rising anti-Semitism on the campus left will further impede the Education Department’s already tentative efforts to enforce civil rights protections for marginalized groups of students.

“What I find particularly troubling is he condemned a black woman on a predominantly white campus for pointing out my oppression,” said Carmen Gosey, who was chairwoman of the Associated Students of Madison, the Wisconsin student government, at the time of the battle there last year.

His approach to the debate at the university “shows he doesn’t understand racism, or he has an issue with black people talking about issues, or anyone who isn’t Jewish talking about their issues, which seems very problematic for someone who is going to be in charge of civil rights,” she said.

Ariela Rivkin, the Jewish student representative on the council, disagreed. She and other students felt targeted by Ms. Gosey’s comments and believed that her decision to allow the divestment legislation to be introduced on the Jewish holiday of Passover was harassing and exclusionary.

Mr. Marcus’s intervention “meant everything to me,” said Ms. Rivkin, who strongly backed Mr. Marcus’s nomination to head the Education Department’s civil rights office. “Whoever is in that role should be able to recognize that I have a right to express myself in a hostile-free environment.”

For his part, Mr. Marcus, a career civil liberties lawyer, says he would show no bias in his approach to civil rights enforcement. During his confirmation hearing last month, Mr. Marcus said he could “think of no higher calling than to enforce the principles of equal justice and provide greater opportunities for students across this great country.”

Mr. Marcus was delegated the authority of assistant secretary for civil rights for two years in the Bush administration where he reinforced protections for women and Jews as well as Muslims and Sikhs who faced religious discrimination in the wake of the attacks of Sept. 11, 2001.

If confirmed by the full Senate, Mr. Marcus would return to the high-profile office at a turbulent time. Issues of race, religion, sexual identity and freedom of speech are roiling elementary, secondary and higher education. Education Secretary Betsy DeVos is under fire for Mr. Trump’s attitudes toward and treatment of immigrants and minority groups, and her own re-examination of Obama-era rules to protect against sexual assault and race discrimination in special education placements is controversial.

“To me, he is more dangerous than she is,” said Maya Berry, executive director of the Arab American Institute, one of the many human rights groups opposing Mr. Marcus’s nomination. “He is infinitely more effective.”

Mr. Marcus served in both the housing and education departments under Mr. Bush and as staff director for the bipartisan United States Commission on Civil Rights, positions that his supporters say have afforded him the skills to combat the most intractable civil rights challenges.

“He has a real good understanding about how all of our rights as Americans fit together, so he’s not one-dimensional in any way,” said Jennifer C. Braceras, a former member of the commission.

His critics question whether he will fulfill the office’s goal to stand up for all students. More than 30 civil rights organizations wrote a letter to the Senate Education Committee urging his rejection.