Review of Perspectives of Psychological Operations (PSYOP) in Contemporary Conflicts 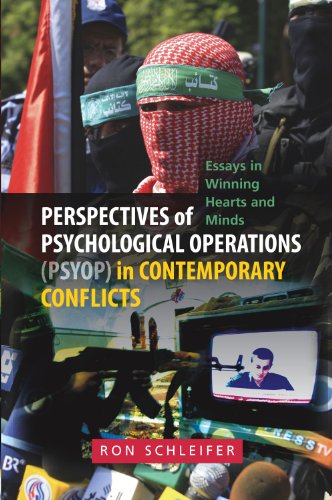 A bitter consensus that has remained for decades in Israeli public discourse is that “the Israeli national image is a disaster”. As the role of the media and public diplomacy gains critical significance in today’s conflicts, the use of Psychological Warfare/Operations (PSYOPS) is only growing in popularity among the enemy forces hostile to Israel.

Otherwise known as propaganda or the “battle for hearts and minds”, the strategic use of PSYOPS aims to influence the opinions, attitudes, motives, and behavior of a target audience as part of an overall method to achieve national objectives. So, how is it that a country possessing far more resources and a superior security apparatus continues to struggle in the realm of image-building during wartime?

Such military-related topics are normally kept confined within think tanks and intelligence agencies, but Dr. Ron Schleifer’s Perspectives of Psychological Operations (PSYOP) in Contemporary Conflicts examines this daunting subject with a straightforward and original portrayal that is accessible to anyone interested in the dilemma of Israel’s deteriorating image on the international scene. Published in 2011, his book is the first of its kind to provide an in-depth analysis of the challenge of PSYOPS use in the West, highlighted by specific examples of the techniques used by both Israelis and Palestinians during the Intifadas.

Having spent several years in both the Israeli Defense Forces (IDF) and the academic arena in Israel and abroad, Dr. Schleifer is considered an Israeli expert on the topic of Information/Psychological Warfare and military-media relations.  He explains that, despite the significant damage they have incurred, Israelis have historically been hesitant to engage in PSYOPS.

In the current sociopolitical environment, the concept itself has become a pejorative term both inside and outside the defense establishment, associated with the ugly side of propaganda or “black operations”. Schleiffer notes that this very avoidance of openly discussing Israel’s vulnerabilities in the face of enemy PSYOPS tactics results in a detrimental effect on the long-term strategic calculus of the country.

The issue is complex and the opinions are wide-ranging. Dr. Schleifer admits that most of the critiques already out there are correct: organizational reasons, carelessness, incorrect prioritization of problems, fractures in coordination, allocating resources, and so on.

He adds that there are also (justified) vulnerabilities to being a democracy: minimal censorship, freedom of movement for reporters, freedom of opinion in a highly diverse political environment, and a natural revulsion to the “dirtiness” of propaganda techniques. Although this is what makes Israel a dynamic and flourishing democracy, it is also a weakness that can be abused. Yet, Dr. Schleifer argues that if fundamental patterns of Israeli decision-making were to be addressed in the perspective of the ongoing “information war”, then Israel will ultimately be able to overcome its image problem.

Perspectives of Psychological Operations (PSYOP) in Contemporary Conflicts is a must-read not only for intelligence analysts and policymakers, but also for anyone interested in comprehending the magnitude of public diplomacy affecting Israel’s reputation, at home and abroad.

In an increasingly communicative world, these operations present a threat to Israel and other Western democracies today that cannot be ignored.

Jessica Snapper has a Masters degree in Security Intelligence with a concentration in Counterterrorism and the Middle East.  She has conducted in-depth research at both the University of Pittsburgh’s Graduate School of Public and International Affairs and the Hebrew University’s Department of Political Violence and Terrorism. She currently works as an analyst based in Jerusalem, her areas of expertise including terrorist infrastructure, asymmetric warfare, tactical adaptability, deterrence and national defense policy. (For further biographical information and articles, see:  http://jessicasnapper.com/)

Review of Perspectives of Psychological Operations (PSYOP) in Contemporary Conflicts