Review of Model Citizens of the State: The Jews of Turkey During the Multiparty Period. 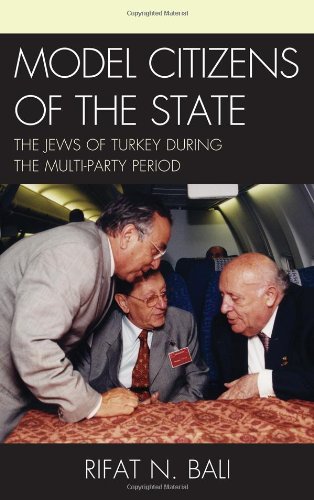 Model Citizens of the State: The Jews of Turkey during the Multi-Party Period. Rifat Bali. Published by Fairleigh Dickinson, 2012. $110.00 pp.540 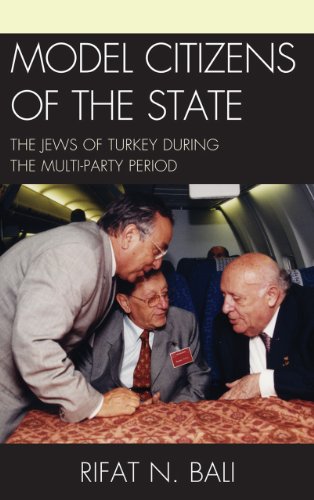 Model Citizens of the State: The Jews of Turkey during the Multiparty Period covers the history of the Jewish Communities in Turkey from 1950 to the recent past.  It is the third volume of the trilogy written by Rifat Bali, the leading historian of contemporary Turkish – Jewish History and author of books, research papers and monographs.  Bali resides in Istanbul.  Not many books have been written on the Turkish Jews, and even fewer, on the contemporary period. Rifat Bali has taken up the challenge of covering this period and offering the reader a comprehensive history, which is richly documented, easily readable, and in some instances reveals hitherto unknown facts.  This study is the result of exhaustive research over the years. (The reviewer should mention that Bali has interviewed him while researching this book and did mention him in its pages.)

It is not easy to describe the Turkish Jewry because it is not homogenous and diverse.  It is comprised of Sephardim exiled from Spain, Byzantine Jews, Kurdish Jews in Southern Turkey (Urfa, Diarbekir, Marash), Syrian Jews in the Hatay province (Iskendrun [Alexandreta]), Antakya (Antioch), and Aramaic-speaking Jews near the Iranian frontier (Van, Bashkale).

The five volumes of Solomon Rosanes’ History of the Jews in the Ottoman Empire, describing Jewish history under the Sultans, the numerous books and articles by Abraham Galante describing Jewish life at the decline of the Ottoman Empire and during the first years of the Turkish Republic, provide the historical background. This volume covers the present, which needs scholarly attention.

During the three periods of Turkish/Ottoman history, Jews were considered as non – Moslem and therefore not of equal standing with Moslems. The attitude to the Jews varies from period to period. Under the Sultans (from the 1490s to the Twentieth Century), Jews were regarded with respect generally, and in some cases the Ottomans came to the aid of Jews in danger. There was the invitation of Sultan Bayasid II (1447-1512) to the Jews expelled from Spain. Suleiman the Magnificent (1520-1566) intervened to save the Jews of Ancona 1556. Abdul Hamid I (1842-1918) intervened to prevent the expulsion the Jews of Vienna (mid-eighteenth century).  Jewish diplomats, governors, medical doctors also served in the Sultan’s palaces. It is not surprising therefore that the Jewish communities of the region greeted the rise of the Ottomans and the fall of the hostile Byzantines with a sigh of relief.

Both Rosanes and Galante describe discrimination and Blood Libels against Jews and even pogroms, but these were perpetrated mainly by the Greek communities and not by the Turks.  After the First World War, under the one-party system rule of the Turkish Republic, founded by Kemal Ataturk and Ismet Inonu, Turkish Nationalism became ascendant.  Jews were discriminated against, not as non – Moslems, but as non – Turks.

Rifat Bali deals with a different period, one far less congenial for the Jews. While Turkish Nationalism continued, Islamism became resurgent, making gradual but steady gains until it finally prevailed in the Twenty-First century. The most important event of this period was the birth of the State of Israel.  Subsequently, the wars between Israelis and Palestinians and several Arab states stoked anti-Israeli feelings among devout Muslims, and Palestinian and Arab propaganda further incited these feelings. This development had an impact on the Jewish community.

One important topic which Rifat Bali addresses is the “wealth tax law” (November 1942), imposing special taxes on non -Turkish or Donme (Sabbathean) merchants and industrialists, who impoverished a large part of the Jewish population.  He describes how, with the rise of the multi-party system, there was hope to recover the losses incurred as a result of this law, but to no avail.

The Nationalistic Republic initiated the cultural “Turkification” of the minorities. The Jewish minority, which was Ladino and French-speaking, had to Turkify itself. The author describes how Jews began speaking Turkish in public and Ladino and French only at home. Similarly, Jews had to change their mainly Spanish-sounding first and last names to Turkish ones. Accordingly, the author devotes great attention to the process by which the Jewish community adapted, defending itself as faithful Turkish citizens, good Jews, and admirers of Israel.

Rifat Bali recounts that with the introduction of the multi-party system, he observed the gradual rebirth of the Islamic movement which found a following among the provincial population.  It was in these areas the secular legislation of Ataturk did not have an impact.

One cannot avoid the impression that the Jewish community in Turkey has suffered as a result of being lumped together with other traditional ethnic communities, such as the Greeks and Armenians. For the Turkish authorities there was no Kurdish minority. The Greek minority was considered the enemy of Turkey, and the problem of Cyprus inflamed this enmity even more. The Armenians are considered as being allied to Turkey’s enemy, namely Russia, and instigating anti-Turkish propaganda all over the world. Therefore, placing the Jews in this company, is unjust. This is especially evident in the description of the events of September 6 – 7 1995, when anti – Greek riots erupted in Istanbul in connection with Cyprus, and the mobs torched Jewish shops along with those of the Greeks.

This was not the case during the years 1960 – 1980, when there was an anti-Israeli reaction which followed the Sinai Campaign (1956), the Six Day War (1967), the Yom Kippur War (1973) and the recent interception of the Marmara.  In the beginning, these acts of violence were the work of Palestinian propaganda and Arab terrorists.  They included attacks on synagogues and the murder of Jewish businessmen.  Later, they were inflamed by the anti-Semitic outbursts by the Islamist leader and, from 1996-1997, Prime Minister Necmettin Erbakan, and continued with the outbursts of today’s Islamist Prime Minister Recep Tayyip Erdogan.

The Jewish community is doing its best to distance itself from politics while defending its rights as Jews, combating anti-Semitism and supporting Israel while remaining loyal Turkish citizens.

The book deals amply with the Armenian massacres (1915-1916) (pp. 201 -205, 235 -256, 269 – 302), which is not its main subject, and this may seem exaggerated. Armenian groups all over the world and some Israeli leftists have been lobbying the Jewish community and the government of Israel to declare the Armenian massacres to be “genocide”. There is an international discussion on the subject, but it is neither the task of the Jewish community of Turkey nor of Israel to take the lead. The massacres were horrible, the Jews are victims of genocide, but the problem of how to describe what took place should be placed in the hands of international jurists and historians.

As a student of Turkish – Jewish history, the reviewer notes that anti-Semites and Radical Moslems attacked in their outbursts against the “Donmes” (followers of the false messiah Shabtai Zvi, now called Sabbatheans, who today are Moslems of Jewish origin). The book could have provided more information about this group.

This study concentrates on Istanbul, where most Turkish Jews live, but during the multi-party period there is only brief mention of the Jewish communities in Thrace and throughout Anatolia. Jews from many of those communities have migrated either to Istanbul or abroad. It would be interesting to analyze the reasons.

Bali makes good use of the sources which include governmental statements, protocols of community discussions, opinions published in the press, interviews, and even reports by Israeli and foreign diplomats.  He had an excellent idea to sum up each decade at the end of every chapter, thus permitting the reader to observe the different waves of the Turkish political life and the highs and lows in the attitude toward Jews.  He has produced a well-documented work will become as a classic in Turkish Jewish modern history. The message which he conveys in the Epilogue is not an easy one. Taking into account the presence of anti-Semitism, which is relatively new in the long history of Turkish-Jewish relations, and the demonization of Israel and Zionism, Bali is pessimistic and does not foresee an immediate improvement. Accordingly, the assessment of such an experienced and knowledgeable historian should be taken seriously.

Friends of the Jewish community in Turkey and of the Turkish people should take into account the fact that there have been highs and lows in the attitudes of different Turkish governments toward the Jewish minority.   Although, this relationship may now be at a low point, it could improve over the long term.  Such things have happened before.

Mordechai Arbelli is a historian and retired member of the foreign service of Israel .He served as the Israeli Vice-Consul in Istanbul (1956-1959).

Review of Model Citizens of the State: The Jews of Turkey During the Multiparty Period.