Review of God, Jews and the Media: Religion and Israel’s Media 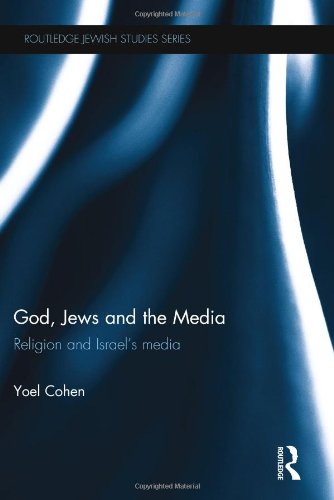 Several years ago, Bar-Ilan University held a symposium on religion and the media. As a newspaper reporter, I was curious as to what the panelists might have to say about the moral issues which a journalist occasionally has to face. What did the rabbis have to say about the conflict between the public’s right to know and the prohibition of lashon hara, evil gossip. How does one face the danger of ruining a person’s reputation or even endangering his or her life by reporting on something they said or did? I wondered if any of the journalists on the panel, some of them religiously observant, had ever consulted a rabbi on such issues.

To my disappointment, the symposium quickly evolved into a discussion on the way in which the media portrayed the Jewish settlers in Israel’s occupied territories, most of whom were identified with the national-religious movement. I then realized that this was what interested most of the audience, who clearly identified with the settlers.

Yoel Cohen, a professor in the School of Communications at Ariel University has delved into a vast array of issues relating to Jewish religious practice and belief and the media, surveying not only the written press, radio and television, but internet coverage and even the leaflets distributed weekly to worshipers at synagogues. He has surveyed the range of Israel’s Jewish population, from the Haredi (ultra-Orthodox) Hassidic and Lithuanian yeshiva circles to the modern Orthodox, to the traditional and secular communities, and has included even the demographically small, if sometimes vocal, Conservative and Reform movements. Indeed, one of the points which becomes clear from Cohen’s study is that media coverage of “religion” in Israel most often is concerned with specific groups and the way they relate to one another. As he points out, theology per se is not particularly newsworthy.

Considerable media attention, he notes, is paid to the members of the Haredi community, both because they are picturesque, with their distinctive dress and lifestyle, and because of their clout in Israel’s political arena. When Shas, a Sephardic Haredi party, was organized to challenge the Ashkenazi Agudat Yisrael, which had hitherto claimed the entire Haredi vote, there was additional coverage. Later, when yet another Haredi party, Degel Hatorah, belonging largely to the rationalist Lithuanian yeshivot, came on the scene, there was even more material for journalists. Cohen mentions the paradox: The rabbis who guided each of these political parties and were the source of considerable interest remained almost entirely inaccessible to the press. Of particular interest in this respect was the former Sephardic chief rabbi, Ovadya Yosef , the spiritual mentor of Shas. In the absence of direct access, journalists would regularly cover his weekly Saturday night sermons, broadcast by satellite, in order to report on his wilder remarks.

Another colorful figure, whom Cohen does not mention, was the late Rabbi Eliezer Schach, the aged mentor of Degel Hatorah, whose pronouncements were top news. He held the fate of the government in his hands in his appearance at one rally in Tel Aviv in 1990, where masses of black garbed followers contrasted with a small cluster of journalists who had to depend on an interpreter to translate Schach’s Yiddish. And, although to some degree Cohen does relate to Habad, one would wish for further elucidation on this movement’s relations with the media, which have ranged from confrontation to manipulation.

At the other end of the religious spectrum one would have also hoped for an in depth analysis of the role of Rabbi Uri Regev who, as head of the Reform Movement’s Israel Religious Action Center, ran a well-oiled campaign on two fronts, in the courts and in the media, relating to a series of issues challenging the Orthodox hegemony over Israel’s religious life. Regev succeeded in doing this in spite of the fact that most Israeli journalists, even those covering the “religious” beat, knew even less about Reform Judaism than they did about Haredim.

However, the main problem with this work is that the author does not seem to have decided whether to write a popular work for the general public or a scholarly dissertation, jumping from anecdote to dry sociological jargon. The book also suffers from poor editing. The most egregious example of this (page 122) is when the author seems to tell us that any child born of a forbidden marriage, such as that between a kohen and a divorcee, is a bastard according to Jewish law. As I am certain the author knows full well, a mamzer (whose situation is far worse than that of a bastard in western culture) is the offspring of a very limited number of combinations, particularly a child proven to be that of a married woman and a man who is not her husband, or the product of incest.

An area which Cohen does cover extensively and informatively and is of particular interest is the profusion of ultra-Orthodox media, which Cohen points out, reflects their philosophy of withdrawing from modernity and seeking to maintain religious values in a cultural ghetto framework. This contrasts with the relatively small range of media aimed at the modern Orthodox or nationalist religious public. At one time, there was one newspaper reflecting the modern Orthodox position, Hatzofe, which no longer appears. Today the nationalist religious camp may be said to be represented by Makor Rishon and to some extent, by the free daily, Yisrael Hayom. A pirate radio station reflecting this outlook, was eventually closed following a court order.

In the Haredi world, there is far more diversion, beyond the longstanding Haredi newspaper, Hamodia of Agudat Yisrael. Today, the political division within this camp is reflected by the appearance of another newspaper, Yated Ne’eman of Degel Hatorah. In many respects the two papers resemble one another. They are actively censored, with no pictures of women and no mention of sex crimes or sexually related issues, even when these are of national interest. To these one may add other affiliated publications including Yom Leyom of Shas, Hamachane HaHaredi of the Belz Hassidim, Ha’edah, of the Council of Torah Sages, and Hahomah of the anti-Zionist Neturei Karta.

They, in turn have been augmented by a bewildering collection of more independent Orthodox and Haredi periodicals, beginning with Yom Shishi and continuing with the more upmarket Mishpacha. These in turn were supplemented by religious radio stations, at first a wide array of pirate stations, which continue to crowd the airways, and eventually the legally sanctioned Radio Kol Chai. Despite the continuing disapproval of the internet, there are even Haredi-oriented internet sites, including Kikar Shabbat, BeHadrei Haredim and LaDaat, which challenge rabbinical bans on internet use while at the same time ostensibly adhering to rabbinical standards.

The relatively small number of publications catering to the modern Orthodox (what had today become the National Religious) public may be said to derive from the fact that it is made up of people who tend to read general publications, listen to the non-religious radio stations, and watch television, while the Haredim shun all of these. At the same time, this is a group which may well be said to feel under-represented in the media. In that sense, perhaps the participants in the Bar-Ilan symposium might not have been so far off the mark.

God, Jews and the Media: Religion and Israel’s Media demonstrates Professor Cohen’s encyclopedic familiarity with the subject. It is clearly required reading for anyone interested in learning about issues relating to religion and the media in Israel. One would hope that any journalist wishing to write about religious issues in Israel would read it as well.

Haim Shapiro was a staff member of the Jerusalem Post from 1973 to 2003. During much of this time, he was the reporter covering religious affairs. Following his retirement he began studying Art History at the Hebrew University in Jerusalem. Recently, he completed his MA thesis, writing about a Greek Orthodox Church which had been decorated in modern times by a Greek artist.

Review of God, Jews and the Media: Religion and Israel’s Media