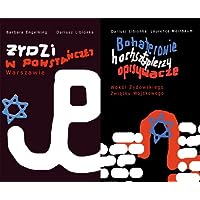 This book is written by two historians, one a Pole, Dariusz Libionka, and the other an Israeli, Laurence Weinbaum. Dr. Libionka is the director of the Majdanek State Museum Research Department and chief editor of the journal, Zagłada Żydów. Studia i Materiały [Holocaust Studies and Materials], published by the Polish Academy of Science Center for Holocaust Studies. Dr. Laurence Weinbaum is chief editor of the Israel Journal of Foreign Affairs, published by the Israel Council on Foreign Relations of the World Jewish Congress, and an adjunct lecturer at the Ariel University. Beneficiaries of a research grant from Israel’s Jabotinsky Institute, and in relentless pursuit of their objective, the two authors analyze an overwhelming amount of source material in both Israel and Poland, much of it previously unknown, and much of it entirely contradictory.

Libionka and Weinbaum’s book is both a scrupulously detailed examination of the Warsaw Ghetto Uprising, focusing on the smaller and less well known the two resistance formations that fought, and a comprehensive collection of survivor, bystander and perpetrator accounts, some published earlier, much of them not. The authors trawled official archives, diaries and correspondence from the period and from the years that have followed. They have also carefully evaluated the secondary sources that have arisen over the years, including, for example, books by Chaim Lazar, Dan Kurzman, Israel Gutman and  Moshe Arens, to name but a few. Significantly, their research is as much about the evolution of the narrative as the actual events themselves. Indeed, the first half of this hefty tome is devoted to a painstaking deconstruction of the story as it evolved over time.

The prevailing image of Jewish victims of the Nazi Holocaust is one of persecution, humiliation, mass murder and submission. The Warsaw Ghetto Uprising (which took place in April/May 1943) is the best known act of Jewish resistance during the Shoah. There were, in fact, many other forms of resistance, and a number of other, smaller uprisings. Individual acts of defiance took place in ghettos other than Warsaw, and there was actually a full-fledged revolt in Białystok (August 1943), There were other smaller, though no less heroic, armed confrontations. Attempts at armed resistance erupted in three extermination camps: Treblinka (August 1943), Sobibór (October 1943) and Auschwitz-Birkenau (October 1944). Thousands of Jews escaped from the ghettos and joined partisan groups in the forests of Poland and Lithuania. Resistance took other forms in other parts of Europe. But resistance without arms and without some form of support from sympathetic non-Jews was all but impossible. Arms cost money, and the Jews had almost none. They also needed allies to assist them on the so-called Aryan side and these were in short supply. Indeed, assistance from outsiders was difficult to come by, and took time to develop. Tragically, time was something that Jews in Warsaw during the German occupation did not have.

As part of “Operation Reinhard,” approximately 300,000 residents of the Warsaw Ghetto were rounded up from July to September 1942 and deported to Treblinka where they were gassed on arrival. It was only after that calamitous event that the Jews of Warsaw seriously began to organize resistance. On 18 January 1943, a second deportation began, this time met with unexpected armed action. Hundreds of people in the Warsaw ghetto, armed with a few handguns and Molotov cocktails, caused German casualties and brought a halt to the proceedings. “Only” 5,000 Jews were removed from the ghetto, instead of the 8,000 originally planned.

Two resistance organizations, the ŻZW (Żydowski Związek Wojskowy or Jewish Military Union) and the ŻOB (Żydowska Organizacja Bojowa or Jewish Combat Organization) took control of the ghetto. They built bunkers and fighting posts and executed a number of collaborators, including Jewish Police officers, and members of a resistance organization called Żagiew, which was sponsored and controlled by the Germans as a trap to ensnare Jews.

The final phase of the ghetto started on the eve of Passover, April 19 1943. When German troops entered the ghetto in order to liquidate it, and were met with gunfire. The relative initial success of the revolt is usually attributed to the efforts of ŻOB in large measure due to the fact that the story of the revolt was told mainly through the eyes of two ŻOB leaders who survived: Yitzhak “Antek” Zukerman, who was ŻOB’s liaison to the Polish underground, and Marek Edelman, deputy commander  of ŻOB, who wrote a tract entitled The Ghetto Fights that was published immediately after the war.

Initially, when the Jews were driven into the ghetto many underground factions took hold, representing the whole gamut of pre-war Jewish political life (left, right, and middle of the road, Zionist, Bundist, assimilationist, religious, militantly secular). After the summer deportations of 1942, the many youth groups coalesced, all under the banner of ŻOB, except that is for the Zionist right, which remained separate and formed its own armed formation, the  ŻZW, That group traced its roots to the prewar Zionist youth movement Betar, founded by the Odessa-born maximalist Jewish leader, Vladimir Ze’ev Jabotinsky. In the years before the war it had been one of the largest Zionist movements in Poland. Menachem Begin had been its leader. However, with the outbreak of the war and the rapid German advances, he and many of his colleagues headed east in hopes that from there they could make their way to Palestine. The authors take pains to explain that, unlike some of the other Jewish youth groups, the right was bereft of most of its senior leaders, and this fact also influenced the course of its development. The Betar underground group was later bolstered by a number of politically unaffiliated fighters, and even some leftists who had not been absorbed by the ŻOB. Among the other aspects of its evolution, the authors pay close attention to the fate of the Betar members who were dispatched from the ghetto to work on farms in the area of Hrubieszów.

The ŻZW and ŻOB did not share their arms; each maintained a separate hierarchy of command. But they did co-operate, at least to the extent that each demarcated its territory and waged war against the Germans from specific coordinated zones. Very few ŻZW fighters survived the uprising and none of the senior leaders.  Because of this, they were not initially given as much credit for bravery as was ŻOB. No less significant was the left-wing dominance of Israeli political life. Accordingly, documents that seemed to suggest that the longest-lasting defense action in the Uprising took place around the ŻZW stronghold at Muranowski Square were largely ignored or downplayed.

Jürgen Stroop, the Nazi commander in charge of putting down the uprising reported in his infamous official description of the event that two flags (the red and white Polish flag and the blue and white banner of the ŻZW) fluttered over the ghetto. Stroop sent daily reports on the German “aktion” in the ghetto plus a final summary report in which he noted that the flags not only motivated but also unified Poles and Jews. Himmler, apparently, ordered him to bring down the flags as his first priority. This book demonstrates that the story of the two flags is depicted very differently in various accounts and was often used, as was the whole ŻZW story, in a symbolic fashion. It is debatable whether the Polish underground fighters aided ŻZW (who actually tended to be more favorably disposed toward the Polish state) more than they did ŻOB, or even at all. The Polish underground, of course, had its own internal political divisions and the extent of Polish aid to which group is difficult to determine with certainty.

There is not even a consensus, for instance, as to who led the ŻZW. The authors dispense with the idea popular in Poland that a Dawid Moryc Apfebaum—and for whom a square is named in Warsaw—was the key personality in the group. They maintain that Apfelbaum never existed (or played any role in the formation) and that  the commanders were actually Leon Rodal, a well-known Yiddish journalist and Revisionist activist from Kielce, and Paweł (Paul) Frenkel. Certainly, one additional difficulty in pinpointing the relevant personalities is that both Jewish and Polish fighters are referred to in the various documents by code names so even that the identity of some individuals is rather uncertain. This is especially noteworthy in the case of Pawel Frenkel, about who almost nothing is known, not even his precise age, and of whom not even a photograph has been found.

Libionka and Weinbaum examine the documents and demonstrate why many of them are unreliable. They identify many that are blatant falsifications or fabrications created out of personal or ideological motives—including several shameless memoirs penned by survivors. Many of the reports that were (and still are) considered trustworthy contradict one another, and many of the survivors’ stories have changed over time. In fact, thanks to Libionka and Weinbaum, some of the original sources have now been definitively discredited and can be discarded.  Significantly, the authors explain that neither Poles nor Jews have a monopoly on confabulation. Indeed, both individual Poles and Jews contributed to the way in which the history of the organization was distorted, though each for different reasons.

During the battle, the ŻZW lost all of its commanders, and, on April 29, the surviving fighters escaped the ghetto through the Muranowski tunnel. On May 8, the Germans uncovered the main command post of the ZOB. Most of that organization’s leadership, including chief commander, Mordechai Anielewicz, took cyanide. Marek Edelman and a few comrades escaped through the ghetto sewers two days later. The suppression of the Uprising officially ended on 16 May 1943, when Stroop personally pushed a detonator button to blow up Warsaw’s Great Synagogue on Tłomackie Street.

This book, in great detail, focuses on the factual and fictional contributions of the ŻZW to the Ghetto Uprising. Some of what has been reported about its role is exposed to be fraudulent or exaggerated. Its authors hasten to explain that this in no way detracts from its very real and heroic contributions to that foremost display of Jewish courage in World War II. Libionka and Weinbaum have succeeded in exploding many of the myths that obscured the real story of the ŻZW and in so doing, have finally set the record straight. Their book is not yet available in English, but one presumes it will be soon.

This book review has been made available to the Faculty Forum courtesy of the Jewish Political Studies Review.