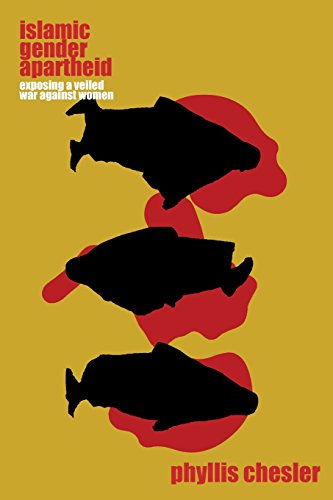 Phyllis Chesler is a true liberal – and as such, she is a thorn in the side of the politically correct crowd who style themselves as liberals but are simply inconsistent socialists who think that loving the underdog is what liberalism means.

Chesler’s latest book, Islamic Gender Apartheid: Exposing a Veiled War Against Women, is a collection of over 100 of  articles she wrote over a 14 year period from 2003 to 2016, all on the topic of how Muslims and Islam treat women.

Chesler knows what she is talking about. In 1961, she fell in love and married a sophisticated Afghan man who took her to Afghanistan to “meet his family.” Thus began a months-long virtual imprisonment and first-hand experience with how Muslims treat women – even in a time before most Afghan women were veiled.

When she managed to escape after months of being debased and mistreated, Chesler started her career as a feminist, authoring dozens of books on the topic over the years.

When I returned to the United States, there were few feminist stirrings. However, within five years, I became a leader of America’s new feminist movement. In 1967, I became active in the National Organization for Women, as well as in various feminist consciousness-raising groups and campaigns. In 1969, I pioneered women’s studies classes for credit, cofounded the Association for Women in Psychology, and began delivering feminist lectures. I also began work on my first book, Women and Madness,[3] which became an oft-cited feminist text.

Firsthand experience of life under Islam as a woman held captive in Kabul has shaped the kind of feminist I became and have remained—one who is not multiculturally “correct.” By seeing how women interacted with men and then with each other, I learned how incredibly servile oppressed peoples could be and how deadly the oppressed could be toward each other. Beebee Jan was cruel to her female servants. She beat her elderly personal servant and verbally humiliated our young and pregnant housemaid. It was an observation that stayed with me.

While multiculturalism has become increasingly popular, I never could accept cultural relativism. Instead, what I experienced in Afghanistan as a woman taught me the necessity of applying a single standard of human rights, not one tailored to each culture. In 1971—less than a decade after my Kabul captivity—I spoke about rescuing women of Bangladesh raped en masse during that country’s war for independence from Pakistan. The suffering of women in the developing world should be considered no less important than the issues feminists address in the West. Accordingly, I called for an invasion of Bosnia long before Washington did anything, and I called for similar military action in Rwanda, Afghanistan, and Sudan.

In recent years, I fear that the “peace and love” crowd in the West has refused to understand how Islamism endangers Western values and lives, beginning with our commitment to women’s rights and human rights. The Islamists who are beheading civilians, stoning Muslim women to death, jailing Muslim dissidents, and bombing civilians on every continent are now moving among us both in the East and in the West. While some feminist leaders and groups have come to publicize the atrocities against women in the Islamic world, they have not tied it to any feminist foreign policy. Women’s studies programs should have been the first to sound the alarm. They do not. More than four decades after I was a virtual prisoner in Afghanistan, I realize how far the Western feminist movement has to go.

This book is an exploration of Chesler’s fight against Islamic gender apartheid – the burqa and chador, honor killings, lashings and stonings of women in Islamic countries who stand up for themselves, routine rapes, female genital mutilation and other horrible crimes against women in Muslim countries.

These are the stories that the Western media usually refuses to cover. Chesler has an encyclopedic knowledge of Muslim crimes against women in the Muslim world as well as in the West.

And, Phyllis Chesler knows the history of the women’s movement – since she has been there from the beginning of the Second Wave. She can recall a time, back in 2001, when Oprah Winfrey could help remove a burqa from a young woman in front of 18,000 cheering women at Madison Square Garden – a scene that is literally impossible to imagine today as these same “feminists’ are defending the burqa as just another fashion choice and not a moving sensory-deprivation prison.

She also talks about the brave Muslim (and ex-Muslim) feminists who are fighting the good fight against this systematic discrimination and abuse. These are her friends. She defends them against the hypocrites of today’s Left who insult these incredibly brave women. And, in her characteristic fearlessness, Chesler excoriates the modern Left who are willing to give Muslim crimes against women a pass.

One of my favorite passages is where Chesler responds to a faux-feminist who accuses her of racism for her criticism of the sexual assault of CBS News reporter Lara Logan in Cairo:

Where were you when I began marching for civil rights of African-americans in the early 160s and tutoring black children in Harlem? …. Read all or any of my articles about what life is like for women in the Middle East and in central Asia, read my studies about honor killings and about the work I’ve been doing on behalf of girls and women who have applied for asylum in the United States and who are in flight from being honor murdered.

These girls and women are not white women. They are all women of color. Do you believe that men of color have the right to treat “their” women barbarically? And that we are obliged to collaborate in sexism in order to be on the right side of racism?

Marcotte: Your accusation of “racism” constitutes a new and terribly fashionable McCarthyism, one that plagues our world. (Yes, I know: McCarthy was also before your time.)

Today, when real racists (think of the ethnic Arab Muslims in Sudan who have committed genocide and gender cleansing against the African Muslims and Christians in Darfur), real fascists, real totalitarians, real barbarians, want to brand, shame, delegitimize, and silence anyone who dares to expose their racism and misogyny, they simply call her a “racist.” The accusation functions as a leper’s bell around one’s neck. It is meant to keep others away, meant to warn people that if, they, too, say similar things or associate with a known “racist,” that they will also be branded as “racists.”

The accusation of “racism” is the new, politically correct version of the old accusation of “communism.” Today, those who level this accusation tend to be leftists, socialists, “progressives,” faux feminists, and real communists.

Most of the articles chosen for the book are relatively short pieces that Chesler published at sites like FrontPage, Pajamas Media, Israel National News or even the Huffington Post. She sparkles, though, when she is given the space to show her scholarship in the longer pieces she wrote for Middle East Forum and other journals, with footnotes.

I recently stumbled across a ridiculous book put out by a university press that claims that anyone who says that they support women’s rights in Muslim countries is really an Islamophobe. Chesler proves this thesis wrong, decisively, by fearlessly standing up for Muslim women and defending Muslim reformers.

Islamic Gender Apartheid is a fearless defense of Western liberal values in the face of political correctness and modern witch hunting.