A Review of A Half Century of Occupation 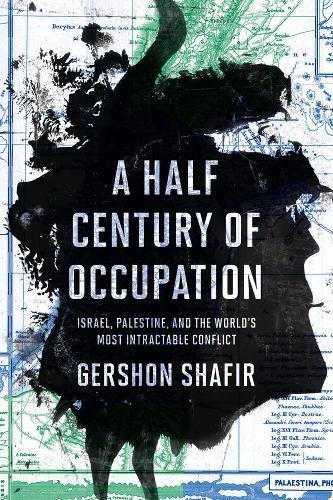 A Half Century of Occupation: Isræl, Palestine, and the World's Most Intractable Conflict. Gershon Shafir. Published by University of California Press, 2017. $26.95 pp.296

In his latest book, A Half Century of Occupation, Gershon Shafir addresses the issue of why the path towards an Israeli-Palestinian peace accord remains blocked. He offers the hypothesis that it is the “colonization” of the “occupied Palestinian territories” (OPT) and the lack of an Israeli desire to end the colonization which is the root cause of the lack of a peace agreement. He offers no alternative hypotheses and clearly casts blame, or at least 98% of the blame, on Israel for the lack of progress towards peace.

The book addresses three questions related to the hypothesis: 1) What is the occupation; 2) Why has the occupation lasted so long; and 3) How has the occupation transformed the Israeli-Palestinian conflict? The crux of his argument follows from the second question, which is that “the occupation is dragged out by the Israeli desire to continue its state building by colonizing and subsequently annexing parts of the OPT”. This has led to an understandable “resistance” (does he mean terrorism?) on the part of the Palestinians who want the Israelis to withdraw to the green line so that their state of Palestine can finally be realized. The Boycott, Divestment, and Sanctions (BDS) movement is understood to be a part of this resistance.

Underlying the book’s givens is that Israel is a settler-colonial state in the fashion of the U.S., Australia, and South Africa. Almost in passing, the author recalls a “Jewish antiquity” within the land, but not nearly enough to claim that the Jews are its extant indigenous people. He glosses over the historical, religious, and cultural connections of the Jews to Palestine and ignores the continuous Jewish presence in the land for the past 3,000 plus years. To the author, the Jews are colonizers, not only in the West Bank but in Israel within the green line as well.

If this were true, then how would withdrawal from the West Bank satisfy the Palestinians?  By asserting that Israel is a colonial-settler state even within the green line, the author argues against the legitimacy of an Israel of any size and undermines the goal of a two state solution. This plays perfectly to the popular Palestinian refrain: Palestine from the river to the sea and the Jews out!

To me, the fundamental question is whether the dispute is about territory or whether there is an ideological/religious basis for the conflict. If the conflict were purely about territory, as the book attempts to show to the exclusion of other possibilities, then UN Resolution 242 could be fulfilled with Israeli withdrawal from territories it occupied as the result of the 1967 War commensurate with   borders that take into account its need for security. But if the conflict is much more than that, namely one related to ideology/religion, then withdrawal would not provide resolution of the dispute.

Instead they claim that Jesus was a Palestinian, that Jerusalem was always exclusively Islamic, that there was never a Jewish Temple, and that Rachel’s Tomb and the Cave of the Patriarchs are exclusively Muslim holy sites. Thus, they deny any and all Jewish connections to Palestine. And according to Hamas and other interpreters of Islam, once Muslim, always Muslim, making a Jewish state illegitimate on religious grounds.

As to why there is still an occupation, Professor Shafir glosses over Palestinian rejections of plans for statehood, such as its rejection of the Peel commission plan of 1937, the UN partition plan of 1947, the Barak plan of 2000, and the Olmert plan of 2008, the latter returning over 95% of the West Bank to the Palestinians. Also ignored is President Carter’s offer to bring the Palestinians into the peace discussions which led to the Israeli-Egyptian peace agreement of 1979. If Arafat had taken part and a peace treaty had been worked out then, much of the settlement activity which Professor Shafir derides would never have taken place.

I do not believe that the author has proven his hypothesis and he has certainly ignored alternative hypotheses, such as the conflict being one of ideology/religion. It is not difficult to come up with additional hypotheses, none of which are mutually exclusive. One such hypothesis is that the Palestinians’ resort to terrorism has made Israelis feel much less secure and much more cautious about proposals that could risk their security. And do they not have a quite legitimate concern about security? In the aftermath of the Oslo Accords in the 1990s, there was a wave of terrorist attacks killing 63 Israelis and wounding over a thousand more. In the wake of Arafat’s rejection of the Barak offer in 2000, the Palestinians initiated the Second Intifada, killing over 900 Israeli civilians, many in gruesome suicide bombings.

The killings did not differentiate between left and right wing Israelis. The children of those in Peace Now were also murdered. The indiscriminate murder effectively killed the Israeli peace camp, i.e. those most advocating for withdrawal from the OPT. It also made security the number one concern for Israelis and prompted the building of the security barrier, which, of course, the author refers to as a wall, notwithstanding the fact that over 90% is fence.

In addition, the author glosses over the terror emanating from Gaza, as if to say the 10,000 plus rockets, missiles, and mortars launched into Israel ever since it vacated Gaza should have no effect on the psyche of Israelis. Their experience in having to deal with Palestinian territory taken over by Hamas has been a reality check. If you were an Israeli, would you not be asking what would happen on the West Bank once the Israelis and their security apparatus were gone and Hamas were to assume control.  Even now, as Hamas vows to expand in the West Bank, there is close security cooperation between Israel and the Palestinian Authority to keep Hamas in check and to virtually eliminate terrorism emanating from the West Bank.

Another hypothesis for the lack of a peace accord is that the Palestinians have done nothing to prepare their population psychologically for peace. They teach their children to delegitimize and demonize Israel, glorify their suicide bombers by naming squares and streets in their honor, pay the families of terrorists stipends for life (the larger the kill of Israelis, the larger the stipend), and exorcise Israel from the map, which shows their students a Palestine extending from the river to the sea.

If their population is not psychologically primed for peace, will there be any push from the grassroots to achieve such an end, and will peaceful relations be possible after an Israeli withdrawal? In 1977, it seemed as if peace were impossible between Egypt and Israel. And then, out of the blue, Sadat traveled to Israel and said he wanted peace. This changed everything, including the Egyptian people’s acceptance of peace. The effect of a Palestinian Sadat could be enormous on the Palestinian and Israeli psyches.

The book presents the Israeli-Palestinian conflict in isolation, oblivious to other events in the Middle East that could have major impacts on Israel and a lasting peace, such as the Arab Awakening and the converging interests between Israel and Saudi Arabia. Would a Palestinian state go the way of other Arab states, with internal wars between Hamas and Fatah or other factions? If Palestine were to fall apart as has much of the Arab world, what would the import be for Israel and any Israeli-Palestinian peace accord? Will closer relations between Israel and Saudi Arabia help to bring about a peace accord? On these questions, the author is silent.

He is also silent on Iran, which is steadily moving its advisors and proxies towards the Mediterranean and the Israeli border. It promises to wipe Israel off the face of the map and is working through its agent, Hezbollah, in Lebanon and Syria. The alliance between Hamas and Iran has also deepened. Hamas recently sent a high level delegation to Tehran seeking support to oppose Abbas’s demand that the PA assume security control in Gaza, and it has sent some leadership to Beirut to better coordinate with Hezbollah. Might there not be the potential for Israel being caught in a pincer between Gaza, Lebanon, and Syria, between Hezbollah and Iranian advisors/proxies in the north and Hamas in the south?

So if there were a peace agreement with the PA, what would happen after an Israeli withdrawal if Hamas were to take over the new state of Palestine and invite their Iranian allies in? This would not portend well for peace and is not discussed in the book, perhaps because it was written prior to the current situation in Syria.

The author’s ending is quite telling and reads as follows:” A reformed, more focused BDS movement with Jewish allies appears the best option for weakening the commitment to colonization, sparing bloodshed, reversing the occupation, and improving the circumstances of both the Palestinian refugees and Israel’s Palestinian Arab citizens”. He doesn’t define what he means by a more focused BDS movement and who its Jewish allies would be. It certainly appears that he is in favor of some form of BDS as the primary means to reverse the occupation. He asks nothing of the Palestinians and would put pressure only on the Israelis via the BDS movement.

It is a shame, but unsurprising, that he did not call on the Palestinians to take any responsibility towards ending the occupation. He could have done this by adding a statement to the effect that the peace process might be furthered if the PA were to take steps that acknowledged the legitimacy of the State of Israel and that convinced Israelis that Palestine would not mean the next stage in the dismantlement of the only state the Jews call home.

A Review of A Half Century of Occupation