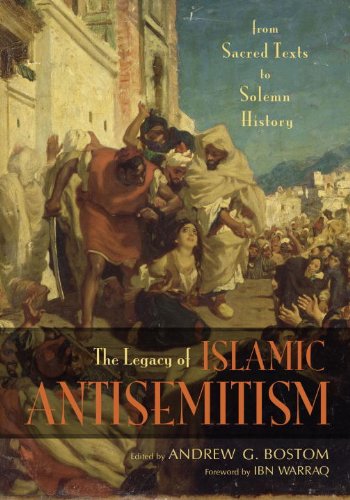 The Legacy of Islamic Antisemitism: From Sacred Texts to Solemn History. Published by Prometheus Books, 2008. $39.99 pp.766

Is there such a thing as Islamic anti-Semitism? That is the implicit question that Andrew Bostom ‘s new book, “The Legacy of Islamic Antisemitism,” tackles. The regrettable answer that presents itself is not based on conjecture, political correctness, anachronisms or wishful thinking – increasingly the domains and paradigms of modern academia – but rather primary texts that speak for themselves. Dr. Bostom, whom I have met and who evinces a passion for the subject of his book, still manages to approach it objectively. A medical doctor by profession, he applies the scientific method and bases his conclusions on the data – as all scholars used to.

And his data is significant: This consists of approximately 700, double-column pages of mostly primary text material, loosely divided into two genres: 1) Islamic law’s stance toward the Jew, as delineated by Muslims (lest the charge of “bias” be made) and 2) historical texts documenting Jewish life under Islamic rule.

What does one learn from this approach? The historical documents make clear that, from day one, Jews and Christians have been systematically treated as second-class citizens, “dhimmis,” in the regions conquered by Islam. Thus even if there were some sort of Andalusian “golden age” – as academics are fond of reminiscing and insisting – that’s exactly all it was, an “age,” an “aberration.”

How else to explain the many documents, across the centuries and from all around the Islamic world, that demonstrate the substandard treatment and contempt Jews were made to live with, centuries before the Arab-Israeli conflict? The book debunks the popular thesis that Islamic enmity for Jews is a Western import.

The two main factors behind Western anti-Semitism – “Christian” hostility and racial theories – can have no influence on the Arab-Islamic world, which does not identify with Christianity. Nor can it, in any form of racial hierarchy, look down on its fellow Semites as inferior. If Nazis made Jews wear special insignias identifying them, so did some Muslims – 1,200 years earlier.

What, then, is the primary impetus behind Islam’s antipathy for Jews? This is where Dr. Bostom’s theological documents are key. We come to discover that, far from being a by-product of Western anti-Semitism or the creation of Israel, animosity toward the Jews has a firm doctrinal base tracing back to Islam’s most authoritative texts.

Koranic verse after verse, hadith after hadith, castigate, condemn and curse the Jews; they are called “corrupters,” “exploiters,” “distorters,” “prophet-killers,” and, most infamously, “pigs and monkeys.” Such slanderous words are contained in the Koran (the eternal words of Allah) and the Hadith (the words of Islam’s prophet). Thus, Muslim hostility for Jews clearly has little to do with circumstance or politics.

In short, were Israel to disappear tomorrow – indeed, had it never been founded – Jews would still, according to the eternal words of Islam, be deemed “corrupters,” “exploiters,” “pigs,” “swine,” et.al., who, along with Christians, must live in submission to Islam. (It is amazing that this latter point is seen as being lenient on Jews; “polytheists”- like Hindus and Buddhists, for example – must either convert or be put to the sword.)

This is what ultimately makes Islam’s position toward the “Other” troubling. While so-called Christian anti-Semitism does exist, it has absolutely no doctrinal backing in the New Testament, and so cannot truly be linked to Christianity. Jesus and his apostles never issued edicts commanding Christians to subjugate Jews – or anyone else, for that matter. One cannot say this about Muhammad. Nearly 200 pages of the book document Muhammad’s animus – often manifested in bloody detail by his biographers – toward the Jews.

The juridical decrees and exegeses of Islam’s most celebrated theologians also confirm the Jews’ reprobate status within Islam. Nor is this limited to the past. Today’s closest equivalent to a Muslim “pope,” Sheikh Tantawi, after besmirching Jews with all the usual epithets – “monkeys,” “swine” – concludes that “[A]ll Jews are not the same. The good ones become Muslims, the bad ones do not.”

The value of Dr. Bostom’s book is that it is a vast collection of important documents – what historians have traditionally prioritized – all of which make clear that enmity for Jews has a firm grounding in the Islamic tradition, with its own rationale and motifs. More troubling, it is not just history, but immutable theology, which transcends time and space and needs to apply today no less than yesterday.

Still, one should not conflate Islam’s mandates with the beliefs of the average “Muslim”; nor should all of these texts be construed as representative of all Muslims. Yet the vast majority of academia has been belaboring these points – while apologizing, distorting and especially ignoring Islam’s most authoritative texts regarding Jews. “The Legacy of Islamic Antisemitism” is a welcome contribution, in that it at least brings balance.

Raymond Ibrahim is the editor of “The Al Qaeda Reader,” first-time translations of religious texts and propaganda.