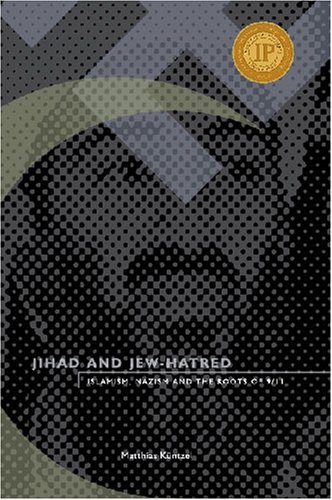 Sometimes book titles leap out at you. “Jihad and Jew-Hatred” sure did. Its subtitle is “Islamism, Nazism and the Roots of 9/11.” When I was invited to a press luncheon for the author, Matthias Kuntzel, I felt I had to go.

Kuntzel is a German political scientist whose writing has been published in the Wall Street Journal, The Times Educational Supplement in the U.K., Il Foglio in Italy and Le Meilleur des Mondes in Frances.

He is a research associate at the prestigious Vidal Sassoon International Centre for the Study of Antisemitism at the Hebrew University of Jerusalem. “Jihad and Jew-Hatred” was the grand prize winner at the 2007 London Book Festival.

Kuntzel contends that the influence of Nazism on what has been called Islamofascism is a potentially important and relatively unexplored area of research.

A major source for his book was the recent discovery of the archives of Radio Zeesen, which, from 1939 to 1945, broadcast Nazi propaganda, with heavy doses of anti-semitism, from a radio station outside of Berlin.

An example of its importance is that an ardent listener to Radio Zeesen when he was young (because he was one of the privileged few to own a radio) was the man who would convert Iran from a fledgling modern state to a medieval theocracy, the Ayatollah Khomeini.

Kuntzel finds it interesting that Iran is now trying to build a similar broadcast network in Latin America.

The Middle East, Kuntzel maintains, is the one part of the world where Nazism was never repudiated. Its major exponent, the Mufti of Jerusalem (interestingly, a not-too-distant relative of Yasser Arafat), eagerly sought the help of the Nazis in the ‘30s because they were the enemy of his enemy, the British.

He spent the war in Axis countries, among other things helping to recruit a Moslem SS unit in Bosnia.

After the war he should have been tried as a collaborator, but both the British and the Americans acquiesced in his being spirited away to Egypt because they did not want to antagonize Arab leaders with oil reserves. In Egypt he continued to preach Nazi ideas at a time when the the rest of the world disavowed them.

Kuntzel acknowledges that the rational attitudes of the West are totally unsympathetic to the mentality of the Middle East.

“There is no doubt among many Moslems that the Koran is literally true,” he says. “For that reason there is no debating the assertion in the Koran that Allan can turn Jews into swine. The only debatable point is how long these pigs can live — long enough to breed? short lives where they will die out in three days? These things can be discussed because they are not dealt with in the Koran.”

Do intellectual points matter when you face an enemy that, as Kuntzel points out, cheers at the indiscriminate murder of innocents?

“Yes,” he says. “Auschwitz didn’t start with the laying of bricks. It started with words.”