Hitting What We Aim At: Jonathan Marks and the Future of Higher Education in America

Review of Let’s Be Reasonable: a Conservative Case for Liberal Education 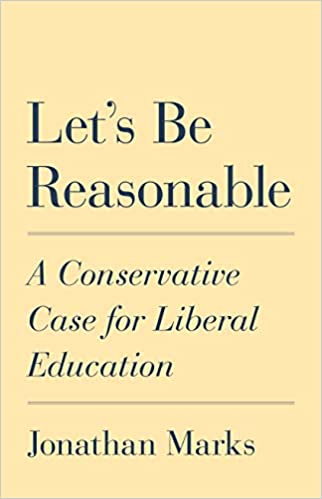 Saul Bellow once remarked that what America meant was the “universal eligibility to be noble.” He thus merged the ancient love of what’s best by nature, in light of eternity, with the modern love of equality, illumined by the flickering flame of history.

Alexis de Tocqueville might have signed on to that vision—as Jonathan Marks almost seems to want to, in his important new book, Let’s Be Reasonable: a Conservative Case for Liberal Education. It should be required reading for anyone expressing an opinion about the state of higher eduction today (so it will be a huge bestseller, in other words!).

For Marks, however, nobility is too high an aim, at least when it comes to today’s institutions of higher learning. Given the range of alternatives, he would settle for producing an educated element of society distinguished by its rationality.

Seeking to know the legitimate purposes of a “liberal education” in our time, the erudite professor of politics at Ursinus College helpfully surveys those familiar justifications at large, ready-to-hand; understandably, finds these (clichés mostly) significantly wanting; and proposes his own formula, with admirable lucidity and concision: “Colleges and universities should respond to and cultivate in students that in them which responds to the summons, ‘Become reasonable!’”[1]

While contemporary champions of old books typically camouflage their wares in more inconspicuous, if uninspiring, bromides about teaching students to deal with “complexity,” adapt to “change,” develop “critical thinking skills,” and/or build up their “literacy” muscles for the sake of communicating efficiently with others in the exchange of the knowledge that fuels our information economy, Marks—the conservative—thinks more of liberal education than that.

If we were doing our job, we’d be welcoming freshmen into “communities of students and faculty who considered it a disgrace not to listen to reason.” In keeping with the high stakes, “Our colleges and universities need to do everything they can to ensure that we’re not mere pretenders when we claim to found our judgments about true and false, good and bad, right and wrong, on more than passion and prejudice” (6). Thus, being reasonable, for Marks, following John Locke, “includes subjects like ethics, history and poetry” (81). It means being at once broadminded and judicious, principled and prudent, moderate and curious, patient and intrepid, logical and imaginative. It doesn’t sound so bad! Anyone teaching in today’s academy who’s not persuaded by the dominant cultural Marxism would take that deal in a second, I’d imagine.

After all, however wanting our pale technocratic nostrums might be, isn’t “nobility” out of reach—for a system of higher education that some have argued not only fails to teach virtue, but, to the contrary, plagued by its own corruption, threatens with “suicide” by means of “political correctness” the very society it’s meant to serve?[2] Short of “defunding the thought police,” then, what is to be done by those dissatisfied—as Marks himself is—with the current state of the heavily politicized, overwhelmingly left-liberal academy?

More modestly, therefore, than the ancients (for whom education, like Bellow’s America, aimed at achieving human excellence), Marks counters with every college students’ eligibility to learn to take pride in being rational—thus, when debating BDS, for example, “to follow the arguments wherever they might lead” (169). Without straining after the unattainable goal of producing any Platos in this day and age, universities might at least shape the souls of “a few [Benjamin] Franklins” (25). In short, he invites us to set our sites a little lower, but not so low that we shoot ourselves in the foot.

And in Marks’s own experience as a college professor, teaching the Israeli-Palestinian conflict, of all things, makes a good example—not of intractable disagreement, fueled by intolerance, but of what the injunction to “listen to reason,” attending to evidence and plausibility, when considering others’ arguments, can actually do. Moreover, in the last chapter of his book, he presents his own confrontation of the Boycott, Divestment and Sanctions movement to “unfriend” Israel from the Facebook community of nations as a “case study” in what such reasonableness has achieved. It turns out that the American Historical Association (AHA), for example, rejected BDS out of a suitably professional sense of shame at the prospect of appearing unreasonable. Likewise, in the classroom, Marks finds both Zionist and anti-Zionist students prepared to listen to reason, rather than come to blows.

Marks is not alone in considering this vexed example as representative, however. For some, by contrast—John M. Ellis, author of The Breakdown of Higher Education, for example—the fact that BDS is entertained as a fit topic of debate, more pessimistically, serves not as inspiration but as conclusive evidence that the politically correct university is beyond repair: “It was once universally acknowledged that political influence will completely corrupt higher education and make it worthless. We now have before us undeniable proof that it does…. The iron grip of identity politics must be broken, for it cannot coexist with the pursuit of truth.”[3] Ellis, after a long career spent writing and petitioning for the reform of higher education in the U.S. now sees it as hopeless. Only the taxpayers can fix it by refusing to go along with things like BDS, DEI (Diversity, Equity and Inclusion), CRT (Critical Race Theory), etc., any longer.[4]

In sum, Marks, himself a veteran of the culture wars and a leading anti-BDS exponent (when he’s not in the classroom, modeling impartiality) has more faith in prospects for liberal education today than some, and less than others. To those yet clinging to the old faith that political theory, for example, has a “vocation,” or that political philosophy presents us with the “permanent problems” of being human and the range of credible answers so far ventured, Let’s Be Reasonable may seem relatively uninspired. Yet from those ready to throw in the towel, having accepted as a fait accompli that academia is the property of wokeism, gender feminism, postmodernism, anti-Americanism and anti-Semitism, he demands at least one more, final hearing for the possibilities of paideia.

After all, the unsayable, for most, becomes unthinkable. So, let it be said, once more, before it’s too late: Colleges and universities should aim to make students reasonable! Now, if there were just some way to make the faculty reasonable….[5]

Gabriel Noah Brahm is Professor of English and World Literature at Northern Michigan University, and Senior Research Fellow at University of Haifa’s Institute for the Study of Zionism. With Cary Nelson, he coedited, in 2014, The Case Against Academic Boycotts of Israel. His forthcoming book is titled, Israel in Theory: The Jewish State and the Cultural Left. Follow him @Brahmski.

[1] Jonathan Marks, Let’s Be Reasonable: a Conservative Case for Liberal Education (Princeton: Princeton UP, 2021), 5. Subsequent references to this edition appear cited in the text.

[4] Christopher Rufo, “Critical Race Theory Would Not Solve Racial Inequality, It Would Deepen It,” The Heritage Foundation, March 23, 2021, https://www.heritage.org/progressivism/report/critical-race-theory-would-not-solve-racial-inequality-it-would-deepen-it.

[5] My thanks to the political theorist, Peter Minowitz, for conversations and comments on a previous draft of this essay.[/vc_column_text]

Hitting What We Aim At: Jonathan Marks and the Future of Higher Education in America

Review of Let’s Be Reasonable: a Conservative Case for Liberal Education

Gabriel Noah Brahm is Senior Research Fellow at University of Haifa’s Herzl Institute for the Study of Zionism. In 2016 he founded Michigan’s Center for Academic and Intellectual Freedom (named an "Oasis of Excellence" by ACTA), at Northern Michigan University, where he also teaches English and world literature. His forthcoming book is Israel in Theory: The Jewish State and the Cultural Left. Follow him on Twitter @Brahmski.