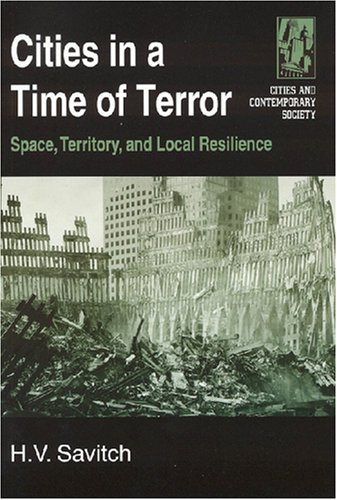 The intriguing parts of Savitch’s book on urban terrorism begin in Chapter 3. This and the four chapters that follow each stand on their own as fine essays, providing a series of insights into what is certain to remain one of this century’s most malignant problems.

In the third chapter, Savitch takes up the idea that terrorism is meant to instill fear, but moves it a further step to show the varied ways in which perpetrators, journalists, and political leaders rhetorically manipulate the aftermath of mass murder. While he does echo the frequent

accusation that US leaders have used the so-called terror card, he also shows that anti-establishment politicians can be accused of the same. He astutely points out how London’s incendiary ex-mayor, Ken Livingstone, deplored the 7/7 London tube bombings as cowardly acts, yet dismissed
terrorist attacks in other nations as the consequence of “80 years of Western intervention into predominantly Arab Lands because of the Western need for oil.” And George Galloway, the neo-Stalinist British MP, deflected blame for the bombings to British and American aggression
and “globalized capitalist economic systems.” As Savitch shows, no party holds the monopoly on the politicization of terror.

I do, however, doubt the widespread idea, which Savitch accepts, that “The inculcation of mass fear is inextricably linked to terror.” (p.4). It might seem reasonable to think so, since isn’t terrorism, after all, about causing terror? Isn’t it postmodern warfare, a kind of killing for media impact? I have my doubts.

Terrorism against Tel Aviv and Jerusalem (until Israel effectively foiled it) and against Baghdad, Karachi, and Colombo continues, numbingly, beyond the point at which it is news. And terrorists in Iraq sometimes torture and mutilate victims, then dispose of the corpses in out-of-the way places, where no cameras help instill mass fear. Recall the stray Israeli soldier’s killer on the West Bank displaying his blood-soaked hands through the window–an act for the crowd, not for the camera. Conversely, would-be suicide bombers who have been detected and cornered in Israel, and could no longer kill Zionists, have occasionally

made the rapid-fire decision just to kill themselves, to no particular anti-Zionist effect. From such incidents I suspect that there is an extent to which terrorist suicide/mass-murder is an end itself, the
outpouring of a death cult, in which the act of killing, including the killing of oneself, is a pathological self-expression, a demented offering to God.

Savitch lays out the five ways in which cities reconfigure the treatment of urban spaces in response to terrorism. They get citizens to watch for suspicious activity, install surveillance devices, use detection devices against unconventional weapons, control movement through guards and
barriers, and construct fortress-like buildings. Here again, his basic fair-mindedness comes through. For example, in discussing Israel’s barrier, he points out barriers in Belfast and Kashmir, similarly built to ward off terrorism, and the walls separating Greek/Turkish Cyprus, Saudi Arabia/Yemen, Morocco/Western Sahara, Botswana/Zimbabwe, and US/Mexico, which are merely meant to control migrants.

On surveillance, he is fair again, raising the problem of policy balance and avoiding paranoia. For a skeptical angle on surveillance, he quotes Uri Sheetrit, once Jerusalem’s chief engineer, that “Terror cannot be dealt with at the point of contact or the moment of detonation…Any real protection has to stop terrorists in their tracks, when they’re preparing or well before, and that takes a lot of hard work.”

In the chapter from which I learned the most, Savitch balances the fairly obvious view that cities make good targets for terrorists with the more subtle point that many cities have haunts where terrorism festers. These include parts of suburban Paris, the Pakistani section of Leeds, London’s Finsbury Mosque, and a neighborhood in Hamburg. Some such neighborhoods now seem to fall outside of a conventional European state. Consider the following description, which Savitch finds in a
documentary on the “Fortress Zone” in Milan:

“[A] member of the cell spent hours in a little Arabic restaurant posing
as a customer, the Tunisian barber keeping an eye on a junction, the
Algerian seller watching over a possible escape route; they were the
sentries with eye and ears everywhere. They noted the faces of all
“suspect” persons: Italian law enforcement agents, but above all spies
from Arabic intelligence agencies.”

It is Savitch’s feat in this book that he has much that is fresh to teach about urban security-a subject on which I do a fair amount of reading-while also keeping it accessible to the general reader. It’s a
fine introductory text. Yet I do have some regrets about it. In his first full chapter, Savitch tries a theoretical overview, but it does not come off, as the subsequent chapters frequently make points that the initial attempt at theory does not encompass. The first two chapters are also somewhat dry, and give the distinct impression of having been put together after the substantive chapters I’ve discussed. This is a pity, since the beginning will discourage some readers, who may not realize
that the rest of his book provides, over a relatively short span of pages, numerous rewarding insights.


Read all stories by Ernest Sternberg