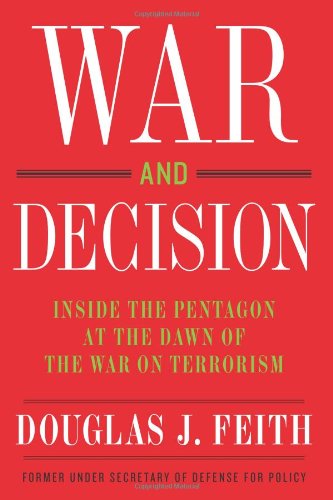 Douglas Feith, who served as Under Secretary of Defense Policy from 2001 until summer 2005, is one of the Jewish so-called “neocons” who were intimately involved in the Bush administration’s deliberations sparked by the attack on the WTC on 9/11. These deliberations lead eventually, of course, to the decisions in 2001 to attack the Taliban in Afghanistan and then in 2003 to topple the regime of Saddam Hussein in Iraq. Feith claims that he is writing not so much a history as a memoir, one that draws heavily on written notes and other sources created at the time. Its purpose is to provide “a window into the Bush Administration’s decisions” (p. ix) on the war on terrorism. Feith also warns us that the book is not meant to be read either as a justification or as an apology but rather as a good faith (and so presumably neutral) narrative of how crucial decisions and policies came to be what they were. In the end, I would say, the book provides the reader with a much more complex, nuanced, intricate and indeed thoughtful process as seen from the inside as opposed to the rather simplistic picture put together by outsiders like Stephen Walt and John Meirsheimer. Its neutrality, to my mind, is much less clear.

The narrative begins with the September 11, 2001 attack, at which time Feith was in Russia on official business. Upon his return to Washington the next day, he found already in place two crucial conceptualizations that would determine the future course of events. One was President Bush’s use of the phrase “War on Terrorism”, which was commonly understood to be meant not figuratively (as in “war on poverty”), but rather quite literally, that is, indicating an actual military operation. The other conceptualization was that the terror to be fought was not the result of disparate and independent groups nor of a single hierarchical organization, but rather was part of a network of various and sundry groups along with the “terror supporting” countries that for whatever reason, or reasons, provided them with financial, logistic, political and other support. Thus even before the events of 9/11 were fully understood, the path was set for a wide-ranging military initiative that was worldwide in scope and would necessarily involve many countries. Thus Iraq, as a “state sponsor of terrorism”, was already explicitly on the table as of day one.

The basic tensions that animate the book are already clear in the first two or three chapters. In short, we have the Secretary of Defense, Donald Rumsfeld and his staff (i.e. Feith) on the one hand (who thought large and globally) and on the other hand virtually all other personalities and agencies, (Rice, Bremer, the Department of State, the Treasury, the CIA and so forth) that obfuscated and eventually subverted in one way or the other everything Rumsfeld was trying to do. For his part, Rumsfeld was conceiving of America’s response to 9/11 as a major campaign against the world-wide network of terror. Eventually this would evolve into really grand conceptualizations, that of a clash of ideas, and beyond that, a clash of nothing less than civilizations. On this level of abstraction, nothing was beyond the pale; there was even discussion down to the level of how to influence the educational system in Pakistan (p. 172). In short, what was eventually being called for was a radical change in the very political landscape of the planet. The campaign was meant to shape not only official government policy but also would necessarily involve not only every aspect of the American government,( not just the military), but also vast and shifting international coalitions and alliances. All of this vast scope with its infinite complexities is reported by Feith as perfectly matter-of-fact. Indeed, it was a source of frustration, according to Feith, that other agencies kept getting bogged down in details and would not, or maybe even could not, properly support the execution of this majestic vision.

This broad context having been sketched out, Chapters Four and Five, nearly one hundred pages, focus on the war in Afghanistan, and on Feith’s own considerable contributions. For example, on page 148 he notes that on a randomly selected day he worked on “planning for continuity of U.S. government operations in the event of a national catastrophe, preparing Rumsfeld for a National Security Council meeting on war-on-terrorism detainees, negotiating offensive arms reductions with Russia, briefing Wolfowitz for a meeting with China’s Vice Minister of Foreign Affairs, and managing U.S. relations with Australia, India, NATO, Romania, Saudi Arabia and South Korea.” He adds that he also briefed Rumsfeld on that day for a meeting with Hamid Karzai of Afghanistan. When not keeping us up-to-date on his own productivity, Feith laments about how the vision crafted by himself and Rumsfeld were misunderstood and misrepresented by the press, and often mishandled by other agencies and persons in the government. In the end, however, we learn that having a broad vision, articulating goals clearly, and staying the course lead to success: the Taliban were driven from the field and Afghanistan was being nurtured into self-rule.

The rest of the book (some 350 pages) is a rehearsal of the seemingly endlessly intricate discussions, meetings, conferences, memos, position papers, consultations and internal politics that led into, and shaped the structure of, the war in Iraq and its aftermath. Although Feith never rises above the mind-numbing details of his account, several themes, some already adumbrated in the previous discussion, run from beginning to end. One is the numerous important, if not absolutely crucial, contributions Feith himself made on every step along the way. He and Rumsfeld, according to this account, in fact foresaw most the problems that occurred and had set out plans and memos to address them. The second is the sheer intellectual power of Rumsfeld who was never ideologically driven, but always probed for hidden assumptions and logical gaps, and thought in big terms. A third theme is that the invasions of Afghanistan and Iraq were not merely knee jerk reactions to 9/11 but grew out of long term trends and developments that came to maturity at just this time.

The fourth theme is that the policies developed by Rumsfeld, Feith and others was always well thought out and intellectually sophisticated even as it was routinely misunderstood, mishandled, distorted and even undermined by the press and the public, and other government agencies. In this regard we are told that the failure to capture Osama bin Laden, for example, was not really a failure since this was never a war about vengeance or about bin Laden personally; it was a war to disrupt the terrorist network generally (page 67, but also pp. 135f). The failure to find WMD’s in Iraq was really irrelevant since the toppling of Saddam Hussein was not about that at all, but about American self-defense more generally (pp. 224f). Bringing democracy to the Middle East was not a goal of the Iraqi war, but was at best a hoped for collateral outcome more generally (pp. 234f). And so on.

Finally, the fifth theme, and really the operative premise of the whole book, is the rampant dysfunction and “lack of clarity” as regards “the interagency decision-making process” (p. 245). The clear visions Rumsfeld brought to the table disappeared into the bureaucratic sinkhole of Washington, as Feith describes matters. No agency, it seems, could cooperate with anyone else, not State, not the CIA, not CENTCOM, even President Bush did not get his own policy correctly all the time. In fact most of the best laid plans of Rumsfeld, Feith, and company were constantly undermined and sabotaged by the likes of Powell, Rice, Tenet and Paul Bremer (the focus of Chapters Fourteen and Fifteen, “From Liberation to Occupation” and “The Taint of Occupation”). The most pointed statement may be the one the close of Chapter Eight (pp. 272-273), “This ideal of government coordination – lively debate leading to solid teamwork — was not achieved in the Bush Administration. State and CIA personnel refused to function as active members of the President’s team.” Rather than make their points or step aside, key national security officials hid their doubts at meetings but acted on them later, and so, as Feith puts it, “even as they retained their reluctance, they retained their high-ranking positions” (p. 273).

By the way, it is in this discussion about war with Iraq that is the only time Israel appears as part of the deliberations. In a meeting of deputy department heads held in June, 2001, Wolfowitz remarked at one point that weakening Saddam Hussein might actually help in achieving the administration’s goals in the Palestinian-Israeli peace process. Richard Armitage disagreed, thinking that the U.S. might in fact be accused of attacking Iraq on Israel’ behalf, so that the attack might end up harming the process. The conversation then moved on to other matters.

The book ends chronologically with the ending of the CPA (Coalition Provisional Authority) and the turning over of power to the Iraqi interim government of Prime Minister Iyad Allawi. The final chapter reviews lessons learned for the future handling of Iraq. It is disappointingly superficial and predictable: formulate realistic goals, calculate costs and benefits, understand that benefits might be intangible, and know that the cost of failure in Iraq could be great. One hardly needs to slog through some 530 pages to adduce these insights.

The real value of the book is not what one learns about Rumsfeld or Feith or any of the other players. It is clear well before the end that this is not a neutral account. What one does indeed get is a window into how the Bush administration operated in these matters from the highest level of major policy decisions down to the petty backroom bickering and bargaining. It is a world of strong personalities, powerful agencies, insightful but clashing agendas and vigorous political gamesmanship. By the end of the book one realizes that reducing all this to one course of action, or one plan, or one vision or one influence (say an “Israel lobby”) is absurd. In fact, it is surprising that what emerges can be called a policy at all. Or at least this is how Feith has come to see it.