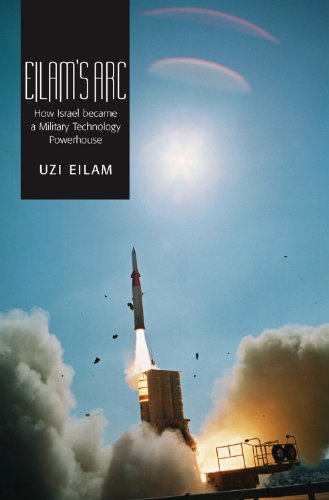 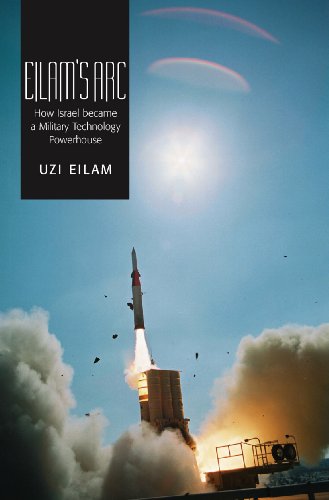 On June 2002, at the President’s Residence, Uzi Eilam received the Israeli Security Prize for Lifelong Achievement. The Israel Prize is a mark of recognition for Eilam’s extensive achievements which he documented in his book. Uzi Eilam was born in Kibbutz Tel Yosef, in 1934, in Mandatory Palestine. Eilam’s military experience began before he finished high school, when in the tenth grade he participated and commanded the youth military training program, the “Gadna.” Throughout his career, he has been involved in Israeli weapons development.  He served as commander of the Military R & D department, becoming director of  MAFAT (The Administration for Weapons Development and Technological Infrastructure), Director General of the Israeli Atomic Energy Commission and a winner of the Israel Security Prize. More recently, Eilam was appointed a Senior Research Fellow at the Institute for National Security Studies based in the Jaffa Center for Strategic Studies. [1]

Israel has become one of the most inventive countries in the world in fields ranging from computer technology to agriculture. The subject of Israeli technological innovation has come to light in recent books such as Start Up Nation, and Israel in the World: Changing Lives Through Innovation. Uzi Eilam’s recent work, Eilam’s Arc: How Israel Became a Military Technology Powerhouse reveals how Israel reached the forefront of military technological innovation. The Israeli Military industry is also well known for innovation and steadfastness leading from underground arms manufacturing under British Mandate Palestine to marketing cutting edge technology in competition with global arms powerhouses. Time and time again voices within the Israeli defense community have called for projects appearing too ambitious but have proven their abilities with resolve. Well known is the weaponry that has come from Israel such as the Uzi, the Ofek Satellite, the Arrow Missile and the Iron Dome. Israel is in fact the eighth largest arms exporter in the world behind such powerhouses such as the US, Russia, China, Britain, France, Italy, and Germany. [2] Uzi Eilam’s autobiography describes the Israeli military technology achievements highlighting how these accomplishments came forth with bare resources forcing Israel to make use of creative innovation as well as years of behind the scenes diplomacy.

Throughout Eilam’s Arc the constant disagreement between elite Israeli decision makers is a central theme. Regardless of the issue, within the military community there was a consistent emotional struggle between those who proposed solutions to perceived problems and those who opposed them. The decisions made in the Israeli military community revolve around budget wars, weaponry, procurement, and organizational structure. Prominent examples include the internal battles to decide what weapons, and in what fashion they were to be used, as in the cases of the Galil, the roller bridge, Merkava tank, and the Ofek satellite. One constant theme in the discussion which Eilam described was the debate whether to build Israeli equipment domestically or to purchase it abroad. This was and remains a central issue in the sphere of Israeli military technology. Eilam describes ambitious advent of Israeli weapons companies such as Israeli Military Industries, Rafael, Israeli Aerospace Industries and others as part of a joint public-private effort to industrialize the IDF.

According to Eilam, Israel’s use of diplomacy was of the utmost importance in carrying out weapons acquisitions from the United States and European players. As is shown in Eilam’s Arc, diplomatic initiatives were implements through official and informal channels.  Eilam mentions billionaire Shaul Eisenberg who was “responsible for all contacts with China,” as Beijing became a customer for Israeli Python missiles. A summary of R&D relations between Israel and the United States, major European powers, India and other Asian countries is completely based on Eilam’s personal dealings with the countries mentioned.  Beyond participating in missions abroad Eilam was also vital in hosting various unnamed countries in Israel for security visits.

As Israel built defense ties with foreign governments, the American ties, supported by vital military aid, would prove to be the most significant. The American aid to Israel is viewed by Eilam as bittersweet, vital, but nonetheless hampering to Israeli potential.  On the one hand, the United States has helped Israel cope with limited resources as Eilam states: “Cuts in the defense budget were accompanied by an increase in the importance of American aid” (124). On the other, Israeli innovation and export potential has been curbed due to the flood of American weaponry and their conditions of acceptance. Eilam writes: “It seemed that the American consideration was to prevent Israel from rapidly developing home-grown technology with its own export potential” (134) Eilam’s working relationship with the United States takes into consideration the technological development discussed, as it is primarily based in the Cold War era. More specifically, Israel applies American technology against Arab militaries which use primarily Soviet weaponry. Eilam tells of American congressional and military congregations that visited Israel immediately following the Yom Kippur war to discuss battle experiences and captured Soviet Weaponry, including tanks, missiles and armored vehicles. The Israelis handed the American delegations detailed reports comparing Soviet and American systems. The work also highlights the “treasure hunt” in the United States, detailing Israel’s complicated correspondence with the United States government while trying to acquire advanced weapons technologies.

Eilam makes use of biblical quotes as creative segues within his writing such as “Out of the North Evil Will Come” (Jeremiah 1:14) while discussing security threat while, with reference to securing Israel, the land will not “have peace for forty years” (Judges 3:8).  Eilam also added the intriguing vagueness of his various jobs with lines such as “a two-day visit to a Scandinavian country for high-level meetings…between Israel and the country in question.” and another mention of “A secret visit to Israel by the defense minister of an African Country” (130). Finally, the direct and indirect encounters Eilam had with esteemed personalities such as Yitzchak Rabin, Bill Clinton, Ariel “Arik” Sharon, and Shimon Peres and many others offers a fascinating incites to a personal experience with Israeli and American elite.

The title of this work Eilam’s Arc, How Israel became a Military Technology Powerhouse is misleading. Eilam’s Arc is not an academic work solely explaining “How Israel became a Military Technological Powerhouse,” but rather Eilam’s personal story and life journey from the bottom of Israeli weapons development to the most advanced echelons. Because this is an autobiography, Eilam is sure to have shortcomings in his attempt to describe the full picture of Israeli military technology, as this autobiography primarily encompasses his personal experience and opinions. Throughout Eilam’s Arc personal approval or disapproval of such Israeli figures as Arial Sharon and Israel Tal and Motta Gur are widespread, Eilam does not shy from adding his views on defense issues. The most relevant example is General Israel Tal in which Eilam continuously expresses overt disagreement with numerous development issues such as the Suez roller bridge, anti-tank systems, and Tal’s professional behavior. With regard to anti-tank systems Eilam states: “Tal enjoyed complete sovereignty over all things related to Israel’s ground forces, and all we could was clench our teeth and remain silent.” (105).

Eilam’s work presents a deep and emotional picture of what the Israeli high-tech military industry consists of.  With decades of first-hand experience and serving in many influential positions, it is clear that Uzi Eilam’s account provides a vital piece of the puzzle that makes up Israeli technological development, thus making this book a necessary read for those who may be interested in the subject. In conclusion, Eilam gives personal policy recommendation: Israeli decision makers should not rely on the global export market; rather they should prioritize “development of technologies exclusively for Israel”.

Guido G. Weiss is pursuing an M.A. in Islamic and Middle Eastern studies at the Hebrew University of Jerusalem.