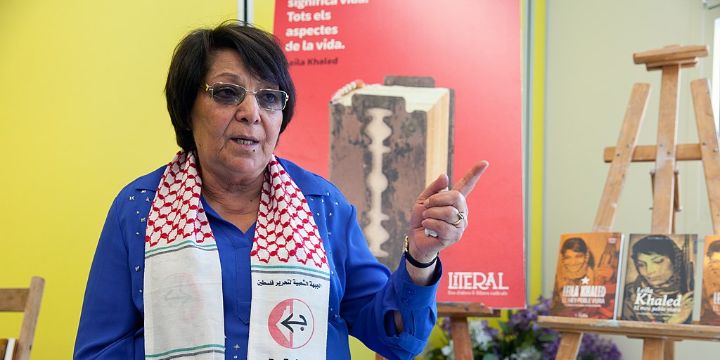 The San Francisco State University’s Arab and Muslim Ethnicities and Diaspora Studies (AMED) program and other sponsors are promoting a virtual webinar with speaker Leila Khaled — a member of US-designated terrorist organization Popular Front for the Liberation of Palestine (PFLP) — months after platforms like Zoom and Facebook refused to host a similar event.

The April 23 event, “Whose Narratives? What Free Speech for Palestine?”, is co-sponsored by SFSU’s AMED program and moderated by the university’s Professor Rabab Abdulhadi, who has previously been criticized by Jewish groups for her rhetoric against pro-Israel students.

The event, originally advertised via a Facebook streaming event, was deleted from the social media site, but registration for the Zoom webinar is still accessible on the Eventbrite platform, and has been promoted on AMED’s Twitter page and other social media pages.

In September 2020, an online seminar featuring Khaled — who took part in the hijacking of a Tel Aviv-bound commercial flight in 1969 — was dropped by Facebook and the videoconferencing provider Zoom, and was taken down from YouTube after partially airing.

According to the promotional flyer, the April 23 event’s agenda will discuss, “Why was the original event featuring Leila Khaled so threatening that it had to be silenced and shut down? More importantly, as we think about questions around censorship, free speech, and the role of corporations like Zoom on university campuses, how can we center the voices of Palestinians and of oppressed peoples?”

“San Francisco State University is once again sponsoring a webinar featuring notorious plane hijacker and PFLP terrorist Khaled, this time in partnership with UC Merced. Just as we did with SFSU’s previous attempt to host Khaled, The Lawfare Project has notified Zoom and trusts them to continue to comply with the law and their own Terms of Service by refusing to provide material support — here, in the form of its video conferencing service — to a member of a designated Foreign Terrorist Organization, as is prohibited by 18 U.S.C. § 2339B,” Brooke Goldstein, Executive Director of The Lawfare Project told The Algemeiner in an e-mailed statement.

In September, after efforts from groups including the Lawfare Project, Facebook took off all promotional material about the event, while Zoom decided to ban the hosts from using the platform — stating that “in light of the speaker’s reported affiliation or membership in a US- designated foreign terrorist organization, and SFSU’s inability to confirm otherwise, we determined the meeting is in violation of Zoom’s Terms of Service and told SFSU they may not use Zoom for this particular event.”

Asked about the April 23 event, a Zoom spokesperson told The Algemeiner that the company was “reviewing the facts of this event to determine if it is consistent with our Terms of Service and Community Standards and will decide on an appropriate course of action after that review.”

Khaled played a pivotal role in two airplane hijackings in 1969 and 1970 as a member of the PFLP, and she is considered by the Israeli Shin Bet intelligence agency to be part of the present Jordanian command of the organization. The terrorist group — which is founded on a Marxist-Leninist ideology and has been involved in suicide bombings, shootings, and assassinations, among other terrorist attacks — is dedicated to the removal of Western “imperialism” and capitalism from the Middle East to create a “democratic Palestine.”

An SFSU spokesperson told The Algemeiner that university president Lynn Mahoney “condemns the glorification of terrorism and use of violence against unarmed civilians. She explicitly condemns antisemitism and other hateful ideologies that marginalize people based on their identities, origins or beliefs.”

“But, as the president of a public university, she is held to the highest standards and supports academic freedom and the ability of faculty to conduct their teaching and scholarship without censorship. A public university must be a place where all ideas can be expressed and debated while remaining committed to ensuring that all are welcome. To our knowledge, these programs are not being hosted on San Francisco State University platforms, and SF State has not had any discussions with Zoom or others regarding the event,” the statement continued.

Additionally, SFSU’s AMED program is scheduled to host an April 17 webinar, “FreeThemAll: In Sumoud and Solidarity from the US to Palestine,” which will be co-moderated by Abdulhadi and live-streamed on Facebook. Among the sponsors is the Addameer Prisoner Support and Human Rights Association, which the Israel-based watchdog NGO Monitor describes as an affiliate of the PFLP. A planned speaker at the event, Yacoub Odeh, is an Addameer board member who previously served 17 years in an Israeli prison for his membership in the PFLP.

Editor’s Note: this article was updated with a comment from a Zoom spokesperson