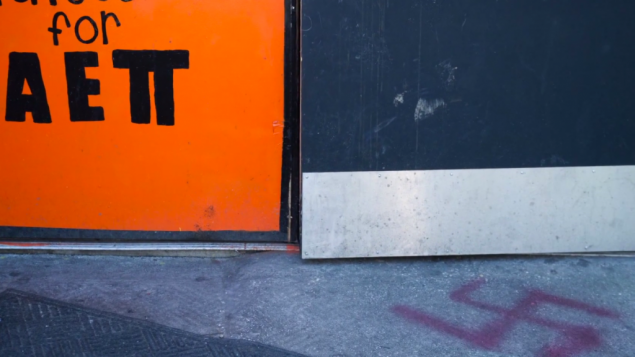 Students at the University of California, Davis woke up Saturday morning to find swastikas spray painted outside of a Jewish fraternity, days after the school’s student government voted in favor of divesting from Israel.

Two swastikas were painted on the walls and steps of the Alpha Epsilon Pi fraternity house, located just of the campus of the Sacramento-area school.

Some Jewish organizations and students on campus claim the vandalism, which Davis police are investigating as a hate crime, is the result of a weeks long feud between pro-Israel groups and boycott, divestment and sanctions organizations on campus..

Last week, Associated Students of UC Davis voted to recommend the University of California board of regents divest its holdings in Israeli companies, a move the fraternity vocally worked against. Pro-Israel activists staged a walk-out during the vote in protest.

“From that bill, there have been Facebook posts that have been unbelievably derogatory toward Jews,” Fraternity Vice President, Nathaniel Bernhard, told the local Fox News affiliate.

UC Davis student group Aggies for Israel, the main organization that had fought the divestment vote, charged that the frat was daubed because of its active opposition to BDS. “Over forty AEPis showed up to the Divestment meeting yesterday and walked out,” the group wrote. “AEPi was clearly targeted.”

The local Jewish Federation quickly responded to the swastikas, calling for the university to unanimously condemn the vandalism.

“This is especially heinous behavior given that this past week, the world commemorated the 70th anniversary of the liberation of Auschwitz,” said Barry Broad, President of the Board of The Jewish Federation of the Sacramento Region. “Unfortunately, the lessons that history has taught us about the culture of hate have not been heeded by everyone.” The University of California, Davis group that spearheaded the divestment vote last week issued a statement on its Facebook page following the vandalism, condemning the action and rejecting any blame.

Some members of the group, however, doubted the authenticity of the crimes and questioned if it was actually done by pro-Israel groups as a form of sabotage. “Chances are that it was a set-up with the goal of sabotoging [sic] divestment,” one commenter wrote in response to the divestment group’s statement.

The university’s chancellor, vice chancellor and provost released a statement on behalf of the university condemning the act. “This kind of behavior is not only repugnant and a gross violation of the values our university holds dear, it is unacceptable and must not be tolerated on our campus or anywhere else,” they wrote.

In October, an Emory University AEPi fraternity house near Atlanta was also spray painted with swastikas.

The Alpha Epsilon Pi fraternity is one of the oldest and most recognizable Jewish fraternities and has long been a supporter of Israel.