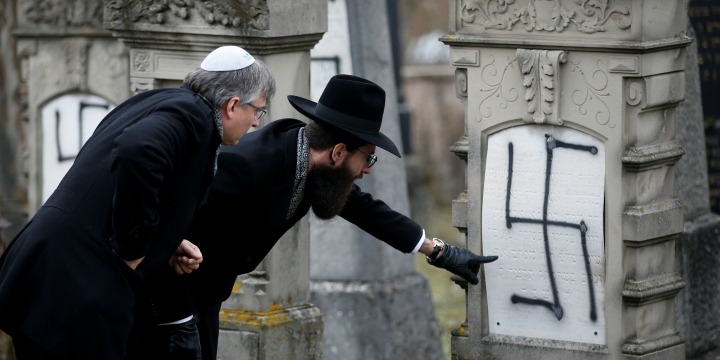 Council members in the French city of Strasbourg voted this week to reject an internationally-accepted definition of antisemitism adopted by dozens of governments and municipalities around the world, despite a surge in ugly antisemitic incidents in the same city over the last year.

At its meeting on Monday night, the council’s main political force, the left-wing Europe Ecology Party (EELV), refused to endorse the International Holocaust Remembrance Alliance (IHRA) definition of antisemitism adopted by 31 states around the world, including the United States.

France adopted the IHRA definition in 2019 at President Emmanuel Macron’s urging, when he stated in February of that year that “antisemitism is killing people in France again” and expressed concern that the French authorities “did not know how to react effectively.”

According to Strasbourg council member Jean Werlen, the body’s objection to the IHRA definition stemmed from its inclusion of examples outlining how the demonization of Israel and Zionism can be antisemitic.

“First, there is a Strasbourg tradition of never importing foreign conflicts into local religious communities,” Werlen — the council member responsible for houses of worship in the city — told news magazine Marianne on Wednesday. “Second, it is out of the question to deny citizens the right to criticize a state, even a foreign one. We must condemn antisemitism, but we must be able to criticize a state and this definition prohibits any criticism of the policy of the State of Israel.”

The IHRA definition clearly states that “criticism of Israel similar to that leveled against any other country cannot be regarded as antisemitic,” while also recognizing that manifestations of antisemitism “might include the targeting of the state of Israel, conceived as a Jewish collectivity.”

One council member who voted in favor of adopting the IHRA definition declared himself “dismayed” by the decision, emphasizing that Strasbourg had been plagued by antisemitic outrages during the last year.

“The city of Strasbourg needs this definition because in recent months there have been several notorious antisemitic acts,” opposition member Pierre Jakubowicz said on Wednesday.

Among the incidents cited by Jakubowicz was the assault last August on a young Jewish graffiti artist who was working on a project commissioned by the city council. After his assailant spotted him wearing a T-shirt carrying the names of various world cities, including Tel Aviv in Israel, the artist was jostled and showered with antisemitic abuse. The assailant then grabbed one of his paint canisters and sprayed offensive slogans on the ground, including “forbidden to Jews” and “bitch.”

At a court hearing in November 2020, the assailant — identified only as a 38-year-old man — was cleared of the crime of committing extortion aggravated by religious hatred and released.

“To fight effectively against an evil, one must first know how to define it,” Jakubowicz observed. He also suggested that the real reason for the council’s rejection of the IHRA definition was “the fact that some members of the majority openly support boycott campaigns against Israel.”

While the IHRA definition does not specifically mention the boycott, divestment and sanctions (BDS) campaign against Israel, it does state that “applying double standards [to the State of Israel] by requiring of it a behavior not expected or demanded of any other democratic nation” can be antisemitic.

“We are the first democratic assembly in a European state to reject this definition,” Jakubowicz emphasized. “This is the official definition of antisemitism adopted by 31 States, by the National Assembly, by the European Parliament whose seat is in Strasbourg, by the Council of Paris and by the city of Nice. Each time it is proposed, it is accepted, left and right.”

The controversy over the rejection of the IHRA definition was compounded by a separate decision at the same council meeting to accept a donation from a Turkish Islamist organization for the construction of a new mosque in Strasbourg.

By a healthy majority of 42-7, the council acknowledged a $3 million donation from Millî Görüs, a Turkish diaspora organization with close ties to Turkey’s authoritarian President Recep Tayyip Erdoğan. The donation will finance about 10 percent of the bill for the building of the Ayyub Sultan mosque, with the remaining funds provided by the city itself.

That announcement brought about a furious response from France’s Interior Minister, Gerald Darmanin, who has been promoting a charter for Islamic community organizations in the country. Millî Görüs, which operates approximately 80 mosques around France, has refused to endorse Darmanin’s document.

“The ‘Green’ city hall of Strasbourg finances a mosque supported by a federation which refused to sign the charter of principles of Islam in France, and which defends political Islam,” Darmanin commented acidly on Twitter.

The ninth largest city in France, Strasbourg is an important political and diplomatic center. One of the four capitals of the European Union, the city is home to the European Parliament and the EU Ombudsman’s Office, as well as the headquarters of the Council of Europe, a human rights organization composed of 47 member states.