The lack of interest in fighting antisemitism among young people isn't about Zionism or Israel. This is about the cultural framing of the Jewish experience as a right-wing issue. 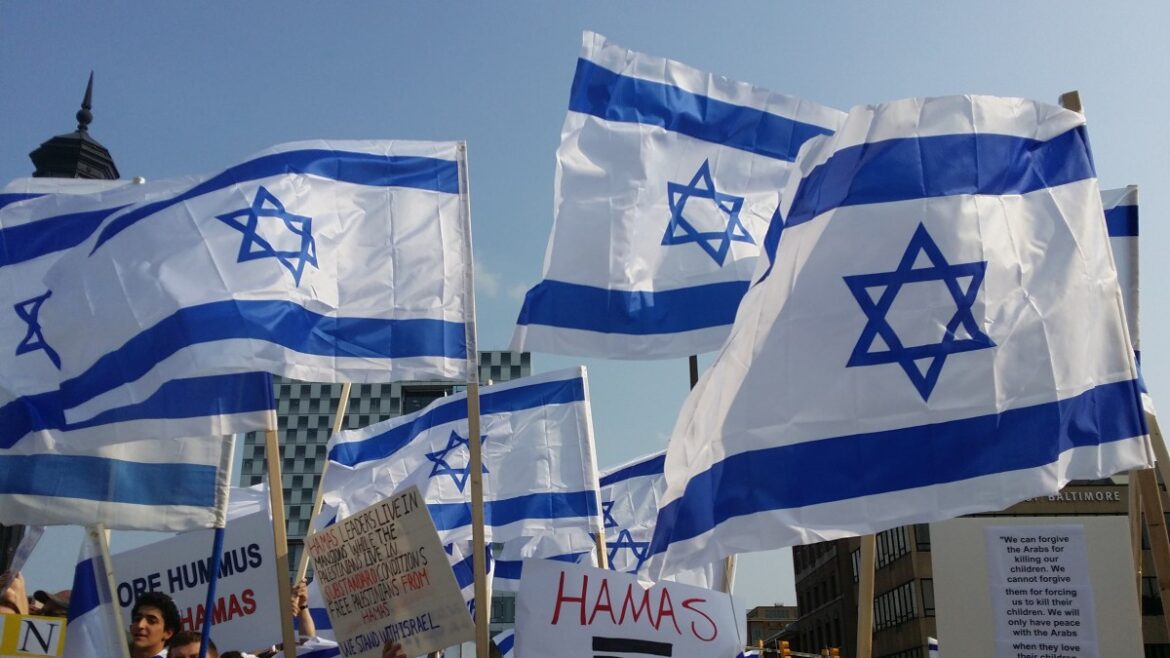 One of the great appeals of attending a political demonstration is the youthful energy of the cause. Generation Z takes pride in taking to the streets for social justice—certainly not a new phenomenon. Throughout American history, the proteins of young DNA have been idealism, progressivism and rebellion against authority. But there is one cause that, although positioned as confronting evil in the pursuit of good, draws fewer college students than a Jimmy Buffett concert. The fight against antisemitism skews dramatically toward older Americans.

Last Sunday, several Jewish organizations sponsored a rally in Washington D.C. in response to the wave of hatred that crashed on American shores this summer. I had the privilege of speaking at this event, aptly titled the #NoFearRally, and was inspired to hear from victims of knife attacks, Jews attacked in restaurants by mobs of anti-Israel protestors, ex-white supremacists, and children of Holocaust survivors. The call to action on this very hot day was clear: We must combat the burgeoning virus of Jew-hatred in the United States, manifested across the political spectrum, in synagogues and on subway cars, its perpetrators stratifying all categories of race, religion and creed.

But in peering over the glass podium while presenting my speech, I saw what I usually see at Jewish gatherings. My parents’ and grandparents’ generations were represented thousands strong, accompanied by only a few hundred young faces. What does it mean that attendees of a rally in support of Jews are part of a completely different age demographic than those at rallies in support of immigrants, action on climate change, or reproductive freedom?

WHAT DOES IT MEAN THAT ATTENDEES OF A RALLY IN SUPPORT OF JEWS ARE PART OF A COMPLETELY DIFFERENT AGE DEMOGRAPHIC THAN THOSE AT RALLIES IN SUPPORT OF IMMIGRANTS, ACTION ON CLIMATE CHANGE, OR REPRODUCTIVE FREEDOM?

Here, some left-wing readers will smirk and indict my words for proving a point. This rally, as is the case with many rallies against antisemitism, was explicitly Zionist. And because it was so Zionist, young people, who are growing more hostile to Israel by the second, were repelled like vampires before garlic. I’m bracing myself for the hypothesis that if only this event had welcomed anti-Zionist organizations, and if only it had platformed speakers who are steadfast in their belief that white supremacy is the only pressing threat to American Jews, more young people would have ransacked CVS for posterboard.

As a young person myself, I call bulls–t.

The lack of interest in fighting antisemitism among young people isn’t about Zionism or Israel. Pray tell, where are the great rallies against Jew hatred by anti-Zionist organizations? There aren’t any, unless of course they can be woven into some universalist narrative exclusively against white nationalism. No, this isn’t about Israel. This is about the cultural framing of the Jewish experience as a right-wing issue.

If we are portrayed as the epitome of wealth, privilege, success and whiteness, our needs become right-wing needs, our safety a right-wing ploy to increase police presence, our homeland a right-wing bastion. It is therefore acceptable to undermine, trivialize and demonize all of these things, and it is therefore problematic to defend any of these things. Jewish particularism is an annoying insect that buzzes around progressivism, demanding much needed attention, but swatted away, because how could it possibly be that we, who defy the binary of who is oppressed and who is oppressive, deserve allyship?

JEWISH PARTICULARISM IS AN ANNOYING INSECT THAT BUZZES AROUND PROGRESSIVISM, DEMANDING MUCH NEEDED ATTENTION, BUT SWATTED AWAY, BECAUSE HOW COULD IT POSSIBLY BE THAT WE, WHO DEFY THE BINARY OF WHO IS OPPRESSED AND WHO IS OPPRESSIVE, DESERVE ALLYSHIP?

Ask any Jewish college student what happens when they raise charges of antisemitism in a progressive space, regardless of whether the charges concern Israel. They will lose friends, acquaintances and opportunities. Our stories are not included in the now infamous diversity and inclusion trainings, or in the intersectional rhapsodies condemning bigotry and racism. That is not, and has never been, a coincidence.

I’m drawn to a recent anonymous submission to the Twitter account “Organizer Memes,” which provides commentary on young, left-wing activist circles. A student writes: “I shared memories of painful antisemitic experiences among a carefully selected group of friends and acquaintances I’ve made in the organizing space, over the least half decade, uncertain of how this information would be received.” And then: “There was a noticeable negative shift in how some people interact(ed) with people now that they knew I’m Jewish. Three people that I communicated with semi-regularly and who are involved in youth political organizing removed me from their follower lists over the course of several weeks. Some put *noticeable* distance  between themselves and me … one person continued to deny Israeli statehood to a follower list of over 2,000 people for a couple days after I relayed my experiences.”

A group of students responded to a Jew with hostility after they shared their experience with antisemitism. Days later, like clockwork, they began posting condemnations of Israel on their social media pages, as if to appease the gnawing guilt on their conscience that treating this person differently was wrong.  It became acceptable to treat this Jew abhorrently, because, “Look at what Israel is doing to the Palestinians!” This is a scenario that many Jewish young people, including myself, can describe in perfect detail. And unfortunately for many of us who have witnessed it first hand, the lesson learned is to keep your mouth shut going forward—which is exactly what is being asked of us by so-called anti-racists.

This summer, the Chancellor of Rutgers University released a statement condemning the rise in anti-Jewish violence that was a symbiotic consequence of Israel’s Operation Guardian of the Walls. After outrage from left-wing students, a second letter was released, in which the chancellor apologized for “failing to communicate support for our Palestinian community members.” The same week, I was scheduled to host a lecture on antisemitism at a local high school during an educational program on intolerance and racism. Though the panel had been organized and finalized in January, I received a text the morning of the event notifying me that it had been scrapped, with the administration citing concerns of “timing.” The other panels, it’s worth noting, carried on as planned.

Or consider April Powers, the Chief Equity and Inclusion Officer for The Society for Children’s Book Writers and Editors. After releasing a statement on the organization’s Facebook page condemning the antisemitic attacks seen across the country this summer, writing, “The SCBWI unequivocally recognizes that the world’s 14.7 million Jewish people (less than 0.018% of the population) have the right to life, safety, and freedom from scapegoating and fear,” Powers resigned from her position. In a series of online attacks against Powers and the SCBWI, one member posted: “I had no idea this was a Zionist/politically motivated organization that doesn’t serve all children.”

If you’re still not convinced, view the Twitter account of comedian and former Bernie Sanders surrogate Amer Zahr, who made headlines in May for saying to his thousands of followers: “This is a message to all the activists and leaders out there that are condemning antisemitism and condemning terrorism right now. Stop it. Stop. You are not helping alright… You are playing their games… It’s a distraction.”

In all scenarios, Israel was used as an excuse, a justification for failing to address Jew hatred, and by extension, a reason to resent the Jewish people even more. Which policies of Israel were criticized? Which legislation in the Knesset was harpooned as problematic? Not one.

When antisemitic violence erupts on the streets of American cities, as it did in December of 2019 when there was no Israeli military operation, there are no hashtags. When Jews are stabbed in broad daylight, miles away from Israel, there are no statements from progressive organizations—certainly not those who operate on college campuses. In the summer of 2021, not only did left-wing politicians stoke hatred by spreading mendacious conspiracy theories about the State of Israel, but also they were unable to condemn antisemitism unequivocally, and insisted on adding a condemnation of islamophobia for good measure. When Jewish Democrats finally mustered the courage to raise the issue of double standards against Israel in Congress, they were accused of “not being partners in justice” by Rep. Ilhan Omar, which simply implies that they are not real members of the left.

All of this is a consequence of Jewish needs falling out of favor with progressive values.

I don’t blame young people, not even Jewish young people, for feeling nervous when called to defend Jews. I am never surprised when I see countless more adult faces at a rally against antisemitism than I do young faces. The Jewish question has once again become toxic, a direct consequence of left-wing identity politics. One generation is carrying that banner louder and prouder than all others. When standing up to antisemitism becomes a political risk, the soil of our once Golden Diaspora is fertilized with the tears of our less fortunate ancestors.

Blake Flayton is a Jewish student activist and the co-founder of New Zionist Congress.

The lack of interest in fighting antisemitism among young people isn't about Zionism or Israel. This is about the cultural framing of the Jewish experience as a right-wing issue.