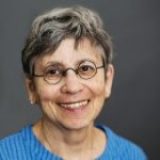 Donna Robinson Divine is the Morningstar Family Professor of Jewish Studies and Professor of Government, Emerita at Smith College where she taught a variety of courses on Middle East Politics. Her books include Women Living Change:  Cross-Cultural Perspectives.  Essays from the Smith College Research Project on Women and Social Change;  Politics and Society in Ottoman Palestine:  The Arab Struggle for Survival and Power, Postcolonial Theory and The Arab-Israeli Conflict, and Exiled in the Homeland:Zionism and the Return to Mandate Palestine, Named the Katharine Asher Engel lecturer at Smith College for the 2012-2013 academic year in recognition of her scholarly achievements, she was also designated as Smith’s Honored Professor for the excellence of her teaching. President of the Association for Israel Studies from 2017-2019, Affiliate Professor at Israel’s University of Haifa she was named to Algemeiner’s 2019 list of the top 100 people “positively influencing Jewish life”.