The UN Makes the Case for an Anti-BDS Law

If there was any doubt about the need for Congress to pass the Israel Anti-Boycott Act, it was erased yesterday.

If there was any doubt about the need for Congress to pass the Israel Anti-Boycott Act, it was erased yesterday when the U.N.’ Office for the High Commissioner on Human Rights issued a report about companies doing business in the West Bank. The Geneva-based agency of the United Nations said it was examining the activities of 206 companies that are connected to Jewish communities in Judea and Samaria. Though it didn’t name the companies, the intent was clear. The goal of the effort is to establish a list endorsed by the international community that would make it possible to boycott the 143 Israeli and 22 U.S companies cited, as well as others. 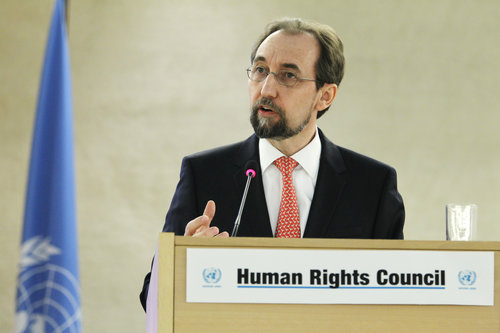 U.S. Ambassador to the United Nations Nikki Haley was right to denounce the step as a waste of time and evidence of the agency’s anti-Israel obsession. But with this move, Congress’s obligation is also made clear. If it doesn’t pass the bill updating and expanding existing legislation banning discriminatory commercial boycotts of Israel, then some Americans will be effectively boxed out of international commerce.

But while this ought to add urgency to the effort to pass a law that will stop the BDS (boycott, divest, sanction) movement from discriminating against Israelis and Jews in this fashion, the campaign on its behalf is bogged down by two deceptive arguments.

The first is the claim that boycotts of the settlements are both legally and morally distinct from boycotts of Israel as a whole.

The second is the assertion that the Anti-Boycott Act is an attempt to prohibit constitutionally protected free speech.

Some people, including many who are supporters of Israel, think boycotting settlements is a reasonable expression of a mainstream political opinion in the Jewish state. They’re right that the existence of the settlements is a legitimate issue on which those who love Israel can disagree.

But the problem is that by treating the settlements in this manner, they are giving Israel’s enemies a foot in the door to treat the entire country in the same manner. To the foes of Zionism who back BDS, Tel Aviv is just as much of an “illegal” settlement as the most remote hilltop outpost in the West Bank.

It’s fair to assert that you can be a supporter of Israel while wishing the settlements would be dismantled. But if you back U.N. actions designed to treat the presence of Jews in Jewish neighborhoods in Jerusalem built after 1967, as well as West Bank communities where hundreds of thousands live as illegal, then you are doing more than undermining Israel’s negotiating position in potential peace talks (assuming the Palestinians were interested in peace, which, as Mahmoud Abbas reminded us last month, they are not). What the boycotters are doing is providing cover for an effort like that of the United Nations, which aims at isolating the entire Israeli economy connected to Jerusalem and the territories.

Nor is anti-BDS legislation a restriction on free speech.

No one would be prevented under this law from advocating the dismantling of settlements or even the destruction of the Jewish state. The law prevents them from helping to carry out discriminatory commercial conduct. Just as it would be illegal to carry out boycotts of companies doing business with African-Americans, or black or even Muslim countries, it is also illegal to try to stop businesses from operating in the one Jewish state on the planet or to conduct transactions with its Jewish supporters around the world. In this sense, the anti-BDS law is just an extension of the laws that were passed in the 1970s that contributed to the collapse of the original Arab boycott of Israel. Fighting BDS isn’t about limiting free speech; it’s about stopping prejudice illegally played out in the marketplace.

As for the U.N. Human Rights apparatus, its determination to anathematize Israel is a long-standing problem. But the justification for its conduct is just as bogus as freelance BDS’ers, such as Students for Justice in Palestine, which is funded by the same people who once served as a front for Hamas.

The United Nations brands settlements as illegal—an argument most of the world accepts despite the fact that Jews were granted the right to live in their national home by the League of Nations, and that no other nation has any legitimate sovereign right to the West Bank. The ultimate disposition of the territories is a matter of dispute that can only be settled by a peace deal, something the Palestinians have consistently rejected because of their refusal to give up their century-old war on Zionism.

But even if you agreed with the United Nations about whether settlements ought to exist, it still doesn’t answer the question of why this world body singles out Israel for doing the same thing other nations have done without being sanctioned. As Northwestern University Law Professor Eugene Kontorovich has pointed out, there are Russians living in the Crimea, Moroccans in the Western Sahara, Turks in Cyprus and other examples of countries settling their populations in disputed territory. But none are subjected to U.N. sanctions or threats, let alone an international movement dedicated to the isolation of those nations.

That is just one more proof that BDS is discrimination, not human-rights activism. It is part and parcel of an anti-Zionist effort indistinguishable from classic anti-Semitism. Its goal is the isolation and elimination of Israel, not changing its policies or borders.

America must not only have no part in such bias, it is obligated to use the law to ensure that prejudice expressed in commercial activity is not practiced in the United States, and that those who seek to compel participation in these anti-Semitic boycotts are themselves subjected to legal prosecution.

The United Nations intended to intimidate Israel. But what it has really done is send Congress a timely reminder: Pass the Anti-Boycott Act as soon as possible.

The UN Makes the Case for an Anti-BDS Law

If there was any doubt about the need for Congress to pass the Israel Anti-Boycott Act, it was erased yesterday.