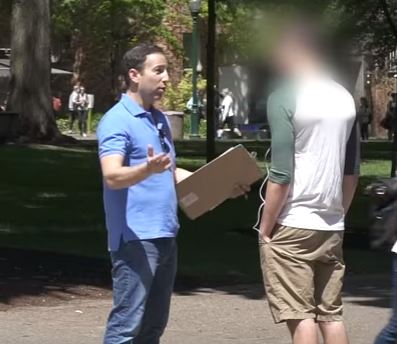 American college students are “frighteningly stupid” when it comes to understanding Israel and global terrorism, a documentary filmmaker toldThe Algemeiner on Tuesday.

Ami Horowitz was referring to what emerged in his latest clip, videotaped at Portland State University, where the anti-Israel Boycott, Divestment and Sanctions movement is very active. To produce the short film, Horowitz posed as a representative of a fabricated organization, “American Friends of Hamas,” soliciting donations for the terrorist group that controls Gaza.

“We’re not your father’s terrorist organizations…We’ve rebuilt and re-branded ourselves. Hamas is where it’s at,” he told student passersby, claiming his organization wants to “fund operations against Israel,” including attacks on “soft targets” like schools, houses of worship, cafes and hospitals.

“It’s the only way we can fight back, really. The suicide bomber is all we’ve got. It’s the poor man’s F-15,” he said. “To get peace, first you have to destroy some stuff.”

In under an hour, Horowitz told The Algemeiner, he was able to raise almost $300. One woman donated $27, claiming it was the same amount she had given to the presidential campaign of Senator Bernie Sanders. Another student, before making his donation, told Horowitz, “I’ve actually been learning this last school year about everything that’s been going on over there [in Israel], so I like the sound of what you’re doing. It sounds like a great thing to do.”

“There is a lack of critical thinking, and it becomes a parroting of what their professors teach them,” Horowitz said. “The main reaction to this video is stone-cold shock. People have a hard time wrapping their minds around this.”

When asked why he produced the clip, Horowitz told The Algemeiner, “Watching the devolution of morality within our college campuses has frightened me greatly for a long time. That is why about half of my videos are campus-focused. Exposing the moral failings of our students — and their professors who fill their heads with this poison — has always been a point of interest to me.”

Horowitz has made a name for himself exposing anti-Israel attitudes. In November 2014, a video showing Horowitz waving an ISIS flag at Berkeley and receiving widespread support went viral, garnering over 1 million views.