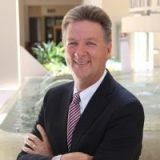 Dr. Robert Lloyd is the Loreen Beisswenger Farish Chair for Political Thought and Dean of the School of Arts & Sciences at Palm Beach Atlantic University.

He received his bachelor’s degree with honors from the University of Arizona, a master’s degree in city and regional planning from Cornell University, and a Ph.D. from the School of Advanced International Studies, Johns Hopkins University.

Dr. Lloyd was a Fulbright scholar to India. He has published numerous scholarly articles on international conflict management, international negotiation, governance, development, and Africa. He worked for a decade with an international development organization in Africa and Washington, DC. He also represented the organization with the United Nations in New York. Currently, Dr. Lloyd is a nonresident Senior Fellow with the Atlantic Council’s Africa Center in Washington, DC and a member of the editorial board of the Journal of the Middle East and Africa.

Combining his research interests with practical engagement, Dr. Lloyd has been a frequent official election observer in Africa with the International Republican Institute, a non-partisan, democracy promotion organization. He is also an award-winning photographer.