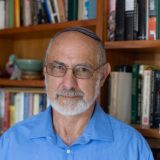 His work focuses on the role of religion in shaping and transforming the relationships between elites and commoners in various cultures. He has coined the expression “demotic religiosity,” an orientation that prizes 1) equality before the law, 2) dignity of manual labor, 3) access to sacred texts and divinity for all believers, and 4) a prizing of moral integrity over social honor. Trained as a medievalist, his early work focused on the period around 1000 CE, a moment, in his opinion, of both cultural mutation (origins of the modern West), and intense apocalyptic and millennial expectations.