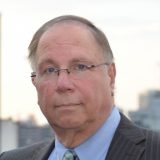 Alex Grobman is an historian with an MA and Ph.D. in contemporary Jewish history from the Hebrew University in Jerusalem.

He is the former executive director of the America-Israel Friendship League (AIFL), and  now an AIFL consultant.  He was a contributing editor for Together, a publication of the American Gathering of Jewish Holocaust Survivors and Their Descendants. He is a member of the academic board of the David S. Wyman Institute for Holocaust Studies and a contributor to the Encyclopedia Judaica and the Partisan website.

Dr. Grobman established the first Holocaust center in the U.S. under the auspices of a Jewish Federation in St. Louis, Missouri and served as its first director. He also served as director of the Simon Wiesenthal Center in Los Angles.