When what some observers called the “new anti-Semitism” began to gather pace at the turn of this century, there were a handful of scholars, Gerstenfeld among them, who were equipped to explain that while the wine was new, the bottles were old. 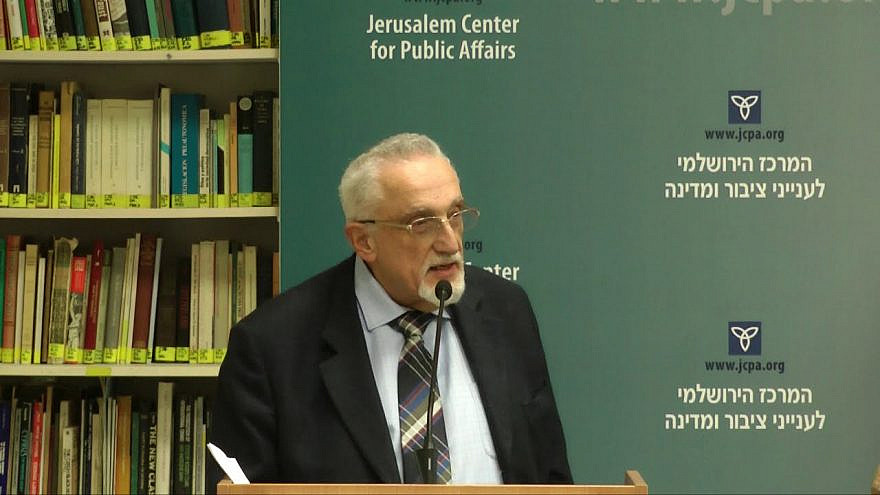 There is an acerbic joke that you sometimes hear in the Netherlands to the effect that most Dutch people were part of the anti-Nazi resistance, but that they joined “after the war.” Like all the best jokes, it cuts into the myths we human beings create about ourselves in order to ward off the guilt and shame that our actions sometimes produce.

Yet the basic truths—in the Dutch wartime case that collaboration with the occupying Germans was widespread, that many people turned a blind eye to what was happening around them, that the overwhelming majority of the country’s Jews were deported and exterminated—can’t be hidden forever, no matter how much we try to deceive ourselves and others.

In that regard, Manfred Gerstenfeld, who passed away in Jerusalem on Feb. 25 at age 84, was an unrivaled master in the art of deconstructing myths in order to reveal bald truths. He did so through his myriad books and articles examining the persistence of anti-Semitism after the Holocaust, most of all in the various countries of Europe, the continent where he was born and lived for much of his life.

I knew Gerstenfeld personally for nearly 20 years as both a friend and an intellectual mentor. Outwardly, he was the very model of a European gentleman, always impeccably dressed and speaking with an accent that gave away his Viennese roots. On several trips to Jerusalem, I visited the apartment where he lived with his late wife, and where—sitting in his book-lined living room with a tumbler of scotch in hand—I would listen to his insights into the bursts of anti-Semitism that were appearing with greater frequency in and beyond Europe, invariably admiring Gerstenfeld’s ability to identify the ideas and themes that linked seemingly disconnected events.

When what some observers called the “new anti-Semitism” began to gather pace at the turn of this century, there were a handful of scholars, Gerstenfeld among them, who were equipped to explain that while the wine was new, the bottles were old. “The widespread resurgence of European anti-Semitism after the Holocaust suggests it is inherent in European culture and values,” he stated plainly in a 2005 article. Like the ballet, he went on, European anti-Semitism had plenty of critics and detractors and yet—again like the ballet—its importance in the development of Europe’s culture was undeniable, and it retained a hefty number of admirers. “The statistics would probably reveal that the number of European anti-Semites far exceeds those who like ballet,” he remarked.

Gerstenfeld’s influence was present on nearly every battleground involving anti-Semitism over the last two decades: the academic boycott of Israel and the wider “boycott, divestment and sanctions” (BDS) movement that sprouted in earnest after 2003; the tropes about Jewish money and power and dual loyalty that dominated the re-energized hostility to Israel on both the far-left and among mainstream liberals and social democrats; the international controversy sparked by the publication in 2006 of the book The Israel Lobby by the American political scientists John Mearsheimer and Stephen Walt; the growing trend of mocking and distorting the Holocaust as a means of attacking Israel and Jews more generally; the global campaigns to demonize Israel as a rogue state that accompanied the 2008-09 and 2014 wars against the Hamas regime in Gaza; and the impact of mass immigration from Muslim countries on the character of anti-Semitism in Europe.

It was on this last point that Gerstenfeld’s work generated opposition, particularly on the left. His plain-speaking style clashed with the reluctance for them to acknowledge that Muslim communities that were undoubtedly victimized by racism could themselves incubate an anti-Semitism that—as we have seen in France on several occasions in recent years—can take on a murderous quality. At an academic conference in London a few years ago, Gerstenfeld’s stress on the disproportionate number of Muslim assailants in reported attacks on Jews led one British professor to storm out of the room, screaming the words “You’re a racist!” and demonstratively refusing to have the private conversation to lower tensions that the ever-polite Gerstenfeld offered him.

But anyone who encountered Gerstenfeld knew that he was never the sort of person to make concessions to the political dogma of any stripe. Many nationalists and Christian Democrats would likely have been pushed out of their comfort zones upon reading Gerstenfeld’s 2005 analysis of the three main strategic errors committed by Europe after World War II.

The first error, he said—anticipating a similar complaint among American conservatives more than a decade later—was Europe’s “reluctance to take responsibility for its own defense against totalitarian communism.” This had resulted in a “low-resistance mindset” that held that the protection of the continent from threats like communism, and later on, Islamist terrorism, was the responsibility of others, primarily the United States.

The second error, according to Gerstenfeld, was that Europe’s dependency on Arab and Iranian oil shattered what remaining moral spine its political leaders had. A long-forgotten example of this was French President Valéry Giscard d’Estaing’s 1977 decision to grant political asylum to Ayatollah Ruhollah Khomeini, who went on to lead the Islamist takeover in Iran two years later. In looking out for its energy interests, said Gerstenfeld, France played a key role in legitimizing a regime that continues to be an existential threat more than 40 years on.

Europe’s third error, according to Gerstenfeld, was its “excessive dependence” on immigration to advance its economic well-being. Foreign immigrants, largely from the Muslim countries neighboring Europe as well as former colonies, “were needed to provide labor, make up for the shortfall in Europe’s birthrates and also to guarantee the future pensions of those working today.”

Taken together, these three “errors” had profoundly negative consequences for Jewish communities in Europe, as well as European relations with the State of Israel. They also played a critical role in helping Europeans to rebrand themselves as the conscience of the world—fighting racism, standing up to American and Israeli intimidation in the Middle East, and so forth—after four centuries of imperial expansion.

The Jewish people were fortunate to have an individual with Gerstenfeld’s intellect to highlight these enduring hypocrisies. As is always the case with the best and most distinctive minds, he is not someone who can be easily replaced, though his influence will certainly endure. May his memory be for a blessing.

Ben Cohen is a New York City-based journalist and author who writes a weekly column on Jewish and international affairs for JNS.

When what some observers called the “new anti-Semitism” began to gather pace at the turn of this century, there were a handful of scholars, Gerstenfeld among them, who were equipped to explain that while the wine was new, the bottles were old.