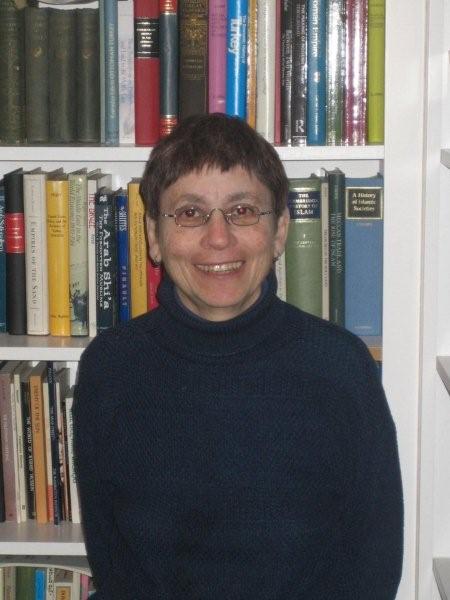 Donna Robinson Divine is the Morningstar Family Professor of Political Science at Smith College. She is the co-author, with Philip Carl Salzman of Postcolonial Theory and the Israeli Arab Conflict (2008 Hardback, 2009 Softcover). She serves on the SPME Board of Directors

Even after many years of teaching at Smith, the classroom still provides a magical experience for me and the map for my intellectual inquiries. My intellectual mission is engaged by the challenge to make connections: to show students how events which seem straight forward are often complicated by conflicting historical references and opposing collective memories and in particular, how even the often murky, seemingly irrational events in the Middle East can be made understandable with the right questions in mind or with appropriate conceptual tools in hand. Although my professional residence is in a department of government, I brew up my research projects in an interdisciplinary cauldron, consistent with my own formal education.

I began to undertake serious work on the Middle East as an undergraduate at Brandeis University, concentrating on the history of Islamic civilizations and on language study. My graduate training at Columbia University broadened and deepened my knowledge of the Middle East through courses on classical Muslim history and on the region’s economics and politics. Among students of the Middle East, my training in three of the region’s major languages is distinctive, enabling me to conduct original research in Arabic, Hebrew, and Turkish. I carried out the first in-depth study of the Israel civil service in the research I undertook for my dissertation and published an analysis of political patronage [‘protekzia’] in its senior ranks. I then shifted my focus to Egypt where I lived and conducted an examination of its chambers of commerce on the eve of the revolution which brought Gamal Abd al-Nasir to power in 1952.

My nearly eight years of residence, at various times, in the Middle East allow me to undertake empirical research on both Arab and Jewish cultures. Long before attention was directed to Palestinian elites and to the evolution of its civil culture, I gathered material on the membership of Fatah. Concentrating on the obituaries of Fatah members killed in missions against Israel, I examined their family backgrounds. The issues defined in that rather study spurred my interest in Palestinian Arab society and my determination to find ways to subject it to sustained scholarly analysis. Thus an essay on Fatah drew me to the topic of Palestinian Arab women and the challenge of incorporating gender into an investigation of power and politics. In the course of pursuing the study of Arab women in Palestine during the period of British rule, background eventually became foreground. The archival material I located was so rich and elaborate that I enlarged the scope of my inquiry into a book exploring how cultural values provide resources for political action. My recently published-Exiled in the Homeland: Zionism and the Return to Mandate Palestine-has allowed me to return to the study of Israel’s history and is, in a sense, a book my education prepared me to write.

Exiled in the Homeland: Zionism and the Return to Mandate Palestine, examines the immigration of Zionists to Palestine during the 1920s in years when their experiences were turned into myth and when their personal struggles to make the land of Israel their home were ignored. The Zionist project I survey in this book concentrates on the period when Jews believed that moving to Palestine lifted them up to a new kind of solidarity, moral development and social coherence. I have chosen the first decade of British rule [1919-1929] as the temporal borders for this study because it was a formative time for developing a Jewish national home and can hold up a mirror to Israel’s conventional nation-building narratives. Thus, I am able to show not only how Zionists settled into Palestine when resources were severely limited but also how much they relied on their visionary hopes and expectations when circumstances provided no cause for optimism. The 1920s-a coherent period from the point of view of British colonial policy and the development of Palestine’s Jewish community-affords an ideal opportunity to examine whether the encounter of Zionists with what they understood as the land of Israel lived up to their expectations and to reflect on both the accomplishments and shortcomings of the Zionist effort to mold a new national identity and to transform the Jewish people. A scholarly engagement with the desires, values, decisions, and reflections of the early generations who created the economic and political structures for the Jewish state means following the individual men and women who crossed continents and seas to make Palestine their home. Immigration was a decisive element in the national life of Palestine’s Jews even though its nature and significance continue to puzzle scholars who seek to know it well.

I found my way to SPME as I watched what was happening at Columbia because when I studied at the school, there was an environment that placed a high value on analysis and scholarly rigor and attached no importance or respect to arguments in the classroom based on personal political viewpoints. Moreover, Israel was fully integrated into the study of the Middle East with Israelis and Palestinians sitting around the same seminar table in discussions not accusations. My commitment to the work of SPME is a commitment to restore the study of the Middle East to the scholarly status it once possessed.

SPME Faculty Profile: Anonymous and All Alone On Campus

This SPME Faculty Profile is being published anonymously, but powerfully demonstrates the need many of our colleagues have to feel connected with a peer group dedicated to academic excellence, honest debate and elevating the understandings of the issues of the Israeli Arab Conflict.
I learn so much from Philip Carl Salzman’s articles. As a librarian in a college I am going to request that we purchase Philip’s books.
My interest in SPME stems from looking for resources for combating anti-semitism and anti-Israel sentiments at my college. It is my solitary battle as the only Jewish employee (and faculty member) on campus. The articles that I have read on the SPME site have helped educate me and given me objective information for discussion, presentation material in the classroom and for library displays.

Unfortunately, in order for me to not worry about job retention I cannot post for public viewing the reasons for my involvement with SPME as of yet. Hopefully one day soon my work environment will be more hospitable.