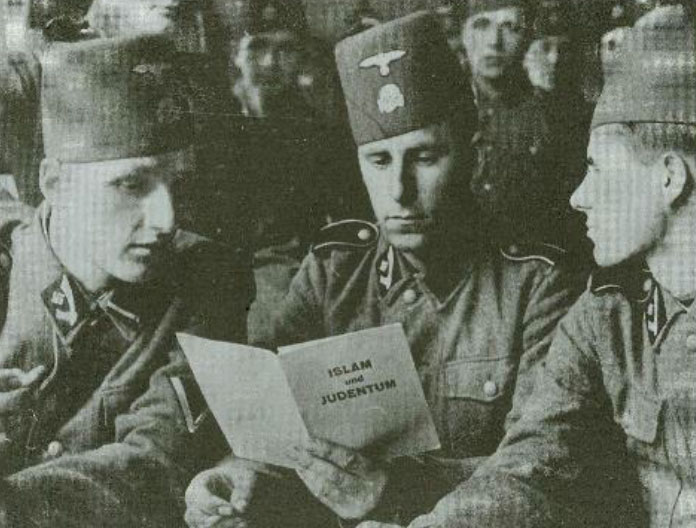 This essay is dedicated to both the late David Littman (d. May 20, 2012), and his wife, Gisele Littman, nom de plume, Bat Ye‘or, for their wise, patient, and generous mentorship.

Paragons of meticulous scholarship, and unflinching intellectual courage, the Littmans introduced me to the themes explored herein, and virtually all my other writings on Islam.

I was blessed to have the Littmans as mentors, personifications of this Confucian dictum:

―A true teacher is one who, keeping the past alive, is also able to understand the present. Confucius (Analects 2.11)

October 4, 1944 —69 years ago—a then internationally renowned Muslim cleric, addressing imams of the Bosnian SS Division fighting for the Nazis, stated the following to his coreligionists:

Nearly one-third of the Koran concerns the Jews. The Koran calls upon all Muslims to protect themselves against the Jews and to fight them wherever they may meet them. The Jews in Khaybar attempted to poison Muhammad, the messenger of Allah; they also carried out themselves or supported various attacks on the person of the Prophet, all of which failed. Muhammad’s many attempts to bring the Jews to their senses were unsuccessful, with the result that he saw himself as simply forced to dispose of the Jews and to run them out of Arabia.

This accurate summary of canonical, mainstream Islamic theology regarding Jews, was made by Hajj Amin el-Husseini —the preeminent Arab Muslim leader of the World War II era.

Concordant with his stature then, in Islamdom, el-Husseini was viewed by Adolph Hitler (and also the Waffen-SS), as a ―Muslim pope.For example, the Nazi regime promoted this former mufti of Jerusalem in an illustrated biographical booklet (printed in Berlin in 1943) which declared him Muhammad‘s direct descendant, an Arab national hero, and the ―incarnation of all ideals and hopes of the Arab nation.

On June 30, 1922, a joint resolution of both Houses of Congress of the United States unanimously endorsed the ―Mandate for Palestine, confirming the irrevocable right of Jews to settle in the area of Palestine anywhere between the Jordan River and the Mediterranean Sea.

The Congressional record contains a statement of support from New York Rep. Walter Chandler which includes an observation, about ―Turkish and Arab agitators . . . preaching a kind of holy war [jihad] against … the Jews of Palestine. During this same era within Palestine, a strong Arab Muslim irredentist current —epitomized by Hajj Amin el-Husseini— promulgated the forcible restoration of sharia-mandated dhimmitude for Jews via jihad. Indeed, two years before he orchestrated the murderous anti-Jewish riots of 1920, that is, in 1918, Hajj Amin el-Husseini stated plainly to a Jewish coworker (at the Jerusalem Governorate), I. A. Abbady, ―This was and will remain an Arab land . . . the Zionists will be massacred to the last man. . . . Nothing but the sword will decide the future of this country.

Despite his role in fomenting the1920 pogroms against Palestinian Jews, el-Husseini was pardoned and subsequently appointed mufti of Jerusalem by the British high commissioner, in May 1921, a title he retained, following the Ottoman practice, for the remainder of his life.

Throughout his public career, the mufti relied upon traditional Koranic anti-Jewish motifs to arouse the Arab street. For example, during the incitement which led to the 1929 Arab revolt in Palestine, he called for combating and slaughtering ―the Jews.not merely Zionists. In fact, most of the Jewish victims of the 1929 Arab revolt were Jews from the centuries-old dhimmi communities (for example, in Hebron), as opposed to recent settlers identified with the Zionist movement.