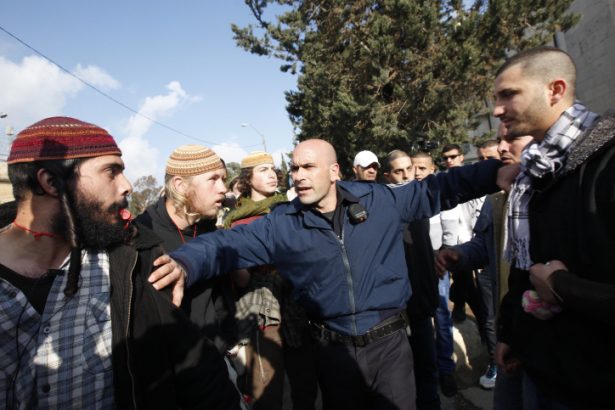 For most Israelis, the military victory of 1967 rescued the country from an existential threat. But for some, it fostered a determination to revive and revise a Zionist goal that promised personal and collective redemption on a land made sacred by ancestors. Making that goal holy through the establishment of Jewish settlements possessed an imaginative and moral power for many. But the dispossessed Palestinian population that vision created continues to shape Israeli society. Politics remains largely about reconciling these two realities.

Israeli and Arabs clash in front of the Magistrates Court in Jerusalem on 3 January 2012. Photo by Miriam Alster. Flashh 90.

Of all the anniversaries marked in 2017 – a hundred years after the Balfour Declaration, 70 after the UN Partition Resolution – none is remembered with as much ambivalence as the half-century since the 1967 War, and none is embedded as deeply in Israel’s politics and culture. How? Let me count the ways.

First, this is the war to which all subsequent wars and other political developments in the Middle East refer. Second, the war made Israel the focus of worldwide attention opening opportunities for economic and political developments never imagined by the country’s founders. It drew to its shores Jews from Europe, America, and the Soviet Union who found spiritual inspiration in Israel even as it increased the numbers of political leaders who suddenly viewed the country as the site where their own economies could be energised and their defenses strengthened. Israel acquired its status today as a start-up nation from trends launched in the 1967 War. Third, the war not only brought Israel back from the abyss, it also confirmed – through UN Resolution 242 – the country’s security needs as the irrevocable standard for resolving all aspects of the Middle East conflict.

At the troubled start of 1967, it was impossible to see a war triggered by Egypt, instigated by a Soviet lie – the ‘fake news’ that Israeli troops were mobilising in the north to attack Syria. It began relatively small but metastasised into a war between Israel and several Arab states spreading suffering and disorder throughout the region. In May 1967, Arabs were poised for victory and redemption. By the end of the first week in June, they were immersed in a massive defeat, their myths dismantled by reality, the gap between hope and betrayal narrowing with every official statement. All of this was symbolised by the unimaginable collapse of Arab nationalism, once deemed the only idea powerful enough to liberate the region from the baleful spoils of colonialism – and by the weakening of its most admired exponent Gamal Abd al-Nasser, president of what was then called the United Arab Republic. A region once characterised as Arab was swallowed up by its own rhetoric and is today scrambling to keep up with its three non-Arab neighbours.

But the war that administered such a blistering defeat to Egypt, Syria, and Jordan and tripled the size of Israel’s landmass, also gave the Jewish state responsibility for more than a million Palestinians living in the West Bank and Gaza Strip. The joy of military victory soon turned into a chronic entanglement. The idea of returning some land in return for some peace produced a breakthrough with Egypt but no other Arab countries. The 1993 Oslo Accords promised a full resolution of the conflict through the notion of two states for two peoples, initially embraced with messianic hope, but soon subjected to withering criticism as negotiations stalled. Today, it continues more as mantra than as policy – as impossible to discard as to implement.

Israelis are caught up in many of the tensions and difficulties produced by a dispossessed Palestinian population who have been victims of abuse by almost every government in whose jurisdiction they have lived. Before 1967, anger periodically drove Palestinians to engage in violence against Israel not for their own independence, but rather for their return to the homes and villages they left behind in 1948 and, as the Palestine Liberation Organisation (PLO) put it in its founding charter, for the restoration of unity to the Arab homeland. After 1967, Palestinians waged an unambiguous struggle for their own sovereignty. But despite bloodshed and suffering and enough resumptions of seemingly stalemated Oslo peace talks to instil a belief in resurrection, the Middle East conflict not only persists but continues to wreak havoc. Consider how fully Israel was once embraced by progressives around the world – Pete Seeger and the Weavers recorded ‘Tzena Tzena’ to mark their admiration for the Jewish state. Today campus warriors for social justice, calling for boycotts, divestment, and sanctions, insist that Israel has not so much lost its way as finally outed itself as violent and racist.

And as the Palestinian issue festers, it takes its toll on the Israeli political system, adding instability to policy deliberations. Governing coalitions are often stitched together to avoid rather than address a problem that, given past efforts, has much more potential for failure than success. The political parties that list brokering a peace agreement with Palestinians as their priority have been diminished both in parliamentary representation and in popular opinion. In a sense, the so-called ‘doves’ have won the argument because the idea of exchanging land for peace has become the default setting in theory, even as it has, in fact, become a source of political trouble and fragmentation. Parties on the Right have splintered over withdrawal from any of the lands conquered in 1967, even those returned to Egypt as mandated by the terms of the peace treaty. And although many political leaders endorse the principle of two states for two peoples, few see how it can work given regional instability and the persistence of a Palestinian culture of resistance and violence. An international consensus on how to bring an end to the conflict may exist, but it seems unworkable to the people expected to live within its auspices. It is no accident that Amir Peretz, one of the many running for Labor Party chair, casts his campaign rhetoric around the famous Shaul Tschernichovsky poem – ‘I believe’– that deems peace a dream only fulfilled through the humanistic work of people who labour on the land with their own hands. It seems as much out of touch with 20st century Israeli society as it is with the complexities and pitfalls of peace negotiations.

Much of the talk this past half century casts a nostalgic spell on the war as precipitating Israel’s supposed shift from liberal and secular to raw ethno-religious nationalism, a society no longer united by its idealism as torn by its divisions. But Israel’s history is littered with Zionist visions sprawling in all directions and in conflict with one another. Even before the 1967 War, the storied socialist enterprises were running out of financing and energy, causing a very hard landing for the economy. But when the reckoning with the assumptions guiding Israel’s development from homeland to state began to emerge, the frictions were articulated and analysed in what sounded more like the language of ethnicity and culture than of class.

Amidst economic distress and social malaise – and just as Israel approached the exhaustion of its founding ideology – the 1967 War, with its conquest of the West Bank territories, resurrected the long-dormant dream of building homes on the historic land of Israel. For most Israelis, their military victory in 1967 rescued the country from an existential threat; for some, it fostered a determination to revive and revise a Zionist goal that promised personal and collective redemption on a land made sacred by ancestors and one that could now be remade holy through the establishment of Jewish settlements.

Like the dominant visions of the past, this one, too, possessed an imaginative and moral power for many who embraced it as a substitute for the decline in public acclaim for Zionism’s original egalitarian transformative mission. Small groups developed a narrative of spiritual rebirth based on building homes and communities on sites woven into Judaism’s sacred story. These communities were intended to symbolise a strengthened dedication to Zionism and Judaism and to give both a new scale of expression.

The many Jewish settlements and religious institutions that dot the hills and towns of the West Bank also tapped into ideals of individuality and personal prosperity, sentiments that had in the past been marginalised or even buried by Israel’s dominant labour Zionist culture. After the 1967 War, the country’s economic expansion enabled many Israelis to build their dream house and recast Israeli culture from a celebration of a Spartan labour ideal into a nation that could offer more liberty to its citizens in their quest for material prosperity and for communities sharing similar life styles. The word settlement – once conjuring up images of a return to the soil, to agricultural labour, and to a work imbued with an egalitarian ethic – became the incarnation of a new bourgeois spirit, but one mitigated by a Biblical language with as much Jewish as Zionist resonance.

A war so inspirational that it raised Jewish consciousness could also not avoid altering the relationship between Israel and the Diaspora. The narrative of ‘negating the Diaspora,’ that hovered over the country’s early history, could not be sustained as the country sought its place as the ‘start-up’ nation prepared to insert its innovative enterprises in the global market and list its own companies on the US Stock Exchange. Fostering a new Jewish identity that claimed to diminish the value of the old complicated the need to engage with people across the globe for economic ties and political support. No longer compelled or motivated to ‘negate’ the Diaspora, Israelis have increasingly opened their culture and society to the lands their ancestors left, injecting new voices into the clashing narratives that have always marked Israel’s history about what kind of Jewish state and society to create.

The tension between a ‘normal’ state with universal ambitions for intercultural resonance and engagement has always stood in tension with the idea of creating a Jewish national identity claiming its own distinctiveness rather than a strict adherence to universal ideals. Think of Bayit Yehudi, the latest incarnation of religious Zionism and Yisrael Beiteinu, the radically secular party of Russian Jews. No political parties could be more different in their assumptions about religion and state with the former identifying the national mission as inherently religious and the latter demanding a radical separation of the two spheres. But there is one word in the parties’ names bridging their differences. Both incorporate the word bayit (home) to suggest that whatever policies they propose, they understand themselves to be part of a larger community whose fate is shared. For in Israel’s Hebrew lexicon, the word bayit is simultaneously singular and plural sustaining the country’s energy not so much to reconcile religious law and secular democracy as to find a way to make room for both.