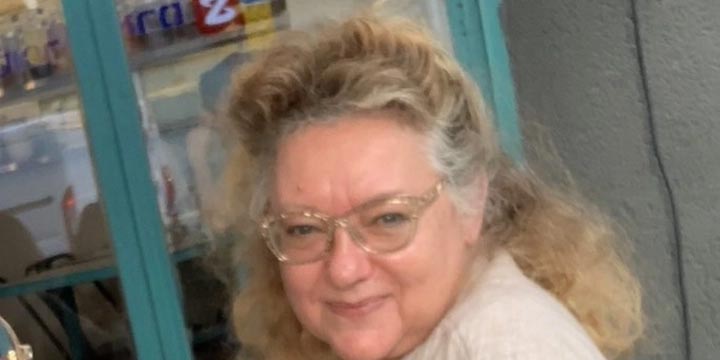 I will always be grateful to Twitter for having brought Petra Marquardt-Bigman into my life. It was there, on a platform that is frequently, and justifiably, maligned for promoting strife and conflict, that we first “met” and began to “talk” about things that mattered to both of us.

One day, I messaged her to tell her that I was on my way to Israel. Might she want to meet in person? She agreed right away.

We met at Café Suzanna, a Tel Aviv institution that occupies a good chunk of a block on Shalom Shabazi Street — a quaint and trendy street that runs toward the sea through the city’s historic Neve Tzedek neighborhood. We met again the next day, and on my next trip to Israel, Petra invited me to spend a weekend at her apartment that sat at the top of one of the high-rises towering over the beaches of Bat Yam.

We went shopping at Bat Yam’s commercial center, where Russian ladies set up shops filled with stylish clothes whose “Made in Italy” labels likely meant “Made in Turkey,” and we giggled as I translated the saleswomen’s gossip to her. Then we sat on the balcony drinking tea and listening to the sounds of the Israeli summer rising from below: waves lapping at the shore, lifeguards barking orders at feckless swimmers, and the rhythmic back-and-forth of the Matkot — a ubiquitous Israeli beach tennis game.

The clothes we bought that weekend are still with me, but Petra no longer is. In early October of last year, shortly after Israel’s second national coronavirus shutdown ended, she went to the hospital to check out a back pain that had been getting worse. Within two weeks, she learned it was cancer. She died on Jan. 7 at the Tel-Hashomer hospital in Tel Aviv.

Those who followed Petra on social media knew her as a fearless defender of truth and accuracy in public discourse about Israel. She fought tirelessly against antisemitism that hid under the label of “anti-Zionism.” Her commitment to the Jewish people was all the more remarkable given that she herself was not Jewish.

Petra Marquardt was born in 1958 in the small village of Schlat, near Stuttgart, in the southern part of Germany. Her parents were refugees from the part of Germany that, after the war, was turned over to Poland. In 1986, she got a scholarship to Georgetown University to write a PhD on US intelligence on 1940s Germany. A few days after arriving at Georgetown, she met her future husband and the love of her life, the Israeli economist David Bigman.

They spent the next two decades splitting their time between Washington DC, Israel, the Netherlands, India, South Korea, Vietnam, and China — wherever David’s work took them. It was in those early years that Petra began to reexamine her prior assumptions about Israel that were grounded in her “lifelong allegiance to the left.” In a 2011 Jerusalem Post article, “Confessions of a Lapsed Leftist,” she noted that one of the decisive factors in her change of heart was watching the left attempt to justify Palestinian terrorism.

As a scholar with a firm commitment to facts, and simply an honest person, she could not ignore the evidence she saw in front of her eyes. And once she saw it, she could not remain silent. She began to dedicate herself to fighting misinformation and distortions she saw in Western coverage of Israel — the “warped mirror” perspective that she saw informing the debate on the issue. This phrase would become the title of her blog.

In the “about” section of the Warped Mirror, which dates to 2011, she noted with characteristic incisiveness that the never-ending attempts to turn Israel into a pariah state had broader implications: “When well-documented historical facts and relevant contexts are routinely dismissed in favor of emotionally charged ‘narratives’ demonizing Israel, it is not just the world’s only Jewish state that is targeted, but the very foundations of the progress derived from the West’s enlightenment heritage.”

Her observations remain acutely relevant today, a full decade after she made them: “We live in times when access to information and knowledge is easier than ever; yet, depressingly, conspiracy theories seem as popular as they were when only privileged elites could read and educate themselves.”

As a scholar of history — including the history of the country of her birth — she had no trouble discerning a parallel between the old Nazi slogan of “Jews are our misfortune” and “Israel is our misfortune”: “There are eerie parallels between the medieval view that the Jews were responsible for Europe’s Black Death and the fashionable notion that it’s the Jewish state that should be blamed for the lack of peace and progress in the Middle East.”

She hated the hypocrisy and intellectual laziness that she saw afflicting both the left and the right. Having lost her political home on the left, she found no other. She was staunchly secular, identifying with her husband’s secularist kibbutznik tradition. She openly criticized Prime Minister Benjamin Netanyahu and felt frustrated by the ongoing dysfunction in Israel’s political system.

She published widely, including in The Algemeiner, Haaretz, The Times of Israel, The Forward, The Guardian, The Jerusalem Post, Legal Insurrection, and others. Her friend, who tweets as @kweansmom, told me that she once asked Petra why she bothered publishing in left-wing publications whose audiences might be hostile to her analysis. Petra’s answer was that she wanted to make sure that pro-Israel voices were present in those spaces, to prevent them from turning into echo chambers.

The news of Petra’s passing produced an outpouring of grief among those who knew her virtually and in real life. The blogger Elder of Ziyon wrote an obituary. So did her colleagues at Legal Insurrection. Twitter user @ClaireRedacted wrote that she felt a “special kinship with Petra,” who she considered a “kind, patient, and warm-hearted” person whose name evoked “justice, love of the Jewish people and our nation.” Michael Elgort tweeted that he would miss “her powerful and knowledgeable voice.” Hen Mazzig posted a photo of himself with Petra, and referred to her as a “dear friend” and “an incredible person, with so much love and brilliance.”

“She left us too soon, and her untimely death is a huge loss to those in the scholarly and professional world who followed her important writings,” Miriam Elman, Executive Director of the Academic Engagement Network, wrote to me. She particularly emphasized the importance of Petra’s writings about the media and the West’s “ignorance and silence over incitement to violence and terrorism against Israelis, but also about antisemitism on the left in the US” as well as the European far-right.

Elman noted how much she appreciated Petra’s defense of her and her colleagues against a smear campaign that erupted over “Word Crimes” — a special issue of the Israel Studies Journal, which Elman co-edited.

For the pro-Israel community, Petra was a warrior, a meticulous and inveterate researcher, and a defender of Israel and the Jewish people. Those who knew her personally will also remember her as a kind and generous person who had spent years caring for her mother, sister, and husband, and was just as giving and caring with her friends. She will be deeply missed.

Izabella Tabarovsky is a scholar with the Kennan Institute at the Wilson Center and a contributing writer for Tablet magazine.