The Commencement Speaker Brandeis University chose for 2015 is a spit in the eye of its ardently Zionist namesake, Justice Louis D. Brandeis. 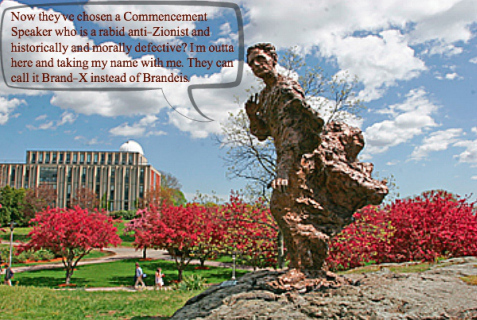 The statue of Justice Louis Brandeis, situated on the grounds of Brandeis University in Waltham, MA, can’t take it anymore.
Photo Credit: Brandeis.edu, with enhancement by Lori Lowenthal Marcus

Of all the absurd positions Brandeis University has taken over the years, the latest really may be the final straw.

Last year Brandeis suffered widespread disgrace for revoking an offer to grant an honorary degree to a Muslim-born advocate for women and children’s rights who had been subjected to female genital mutilation and threatened with murder by Islamic fundamentalists for being “anti-Islam.” This year, Brandeis selected as its commencement speaker a former U.S. State Department careerist who thinks the state of Palestine exists and that “Palestine” “granted” to Israel land that “Palestine” had been “assigned” in 1947.

That former administration official, Thomas Pickering, wrote a public letter last year encouraging the U.S. administration to stop kowtowing to Israel — and we all know how eager the Obama administration has been to take orders from Jerusalem.

Pickering has the reputation of being extremely anti-Israel even amongst his peers – and for the State Department, that’s quite an achievement. If Justice Louis Dembitz Brandeis, the ardent Zionist and advocate for the disenfranchised (for him the concepts were naturally compatible) for whom Brandeis University was named, could see what his namesake university was doing, he would demand his name be removed.

It was just a year ago that Brandeis University withdrew an offer to award an honorary degree Ayaan Hirsi Ali, a world-class humanitarian, because some dimwitted students, aided and abetted by professors with ossified mindsets, insisted the woman was “Islamophobic.” Hirsi Ali, knows from firsthand experience more about Islam than all the mewling students and professors put together.

The suffix “phobic” means an irrational fear of something. Hirsi Ali’s distaste for Islam is as based in reality as it can get.

Dial forward to this spring, when Brandeis commencement and its speakers is once again a topic.

So what does Brandeis University do? Pick a noncontroversial speaker who is deserving of an honorary degree for being a decent human being, perhaps someone with some connection to the university itself? Nah.

Instead, Brandeis University announced that its commencement speaker for 2015 is former Ambassador and under secretary of state for political affairs Thomas Pickering, someone who fervently believes Israel is inappropriately coddled by the Obama administration and that the Jewish state has stolen land from the mythical land of Palestine, despite the “Palestinians” having graciously conceded a huge chunk of the land “assigned” to the “Palestinians in 1947.”

That’s right, Israel is coddled by the Obama/Kerry approach to the Middle East conflict, according to Pickering. And the “Palestinians” are the magnanimous yet oppressed party on the losing end of the stick with Israel. This view is out of touch with Zionists – whom Brandeis the justice, if not the university, would have hoped a school bearing his name would graduate.

We know Pickering’s positions and ahistorical understandings because, almost exactly a year ago, Pickering and a few of his like-minded public pals signed a letter published as an op-ed calling on this U.S. administration to stop allowing Israel to walk all over it.

You see, in the eyes of Pickering and his well-known Israel-despising co-signers Zbigniew Brzezinski, Henry Siegman, Lee Hamilton, Frank Carlucci and Carla Hills, this administration should man up and stop allowing the world to think it shares Israel’s views about its security needs and its history. Also, time to jettison those annoying facts that support reality.

But first, you need to know what kind of Zionist Louis Brandeis was. While a secular Jew, Brandeis became an ardent and unabashed Zionist. Not only was he an early president of the Zionist Organization of America, but he believed in territorial control by the Jews of all the land promised for a Jewish State by Lord Balfour in 1917.

Louis Brandeis was a firm believer in helping to arm the Jews who were attempting to create a Jewish state. He insisted that the contours of the Jewish state had to extend to the north, to the “Litani watersheds” which is in the south of what is now Lebanon, and to the east, to the “plain of Jaulan Hauran,” which is now in northwestern Jordan and southwestern Syria.

It is in the context of Justice Brandeis’s approach to Zionism that the letter written by Pickering and his fellow anti-Israel pen pals must be understood.

What follows are some of the more surprising snippets of thatletter:

“The United States has allowed the impression that it supports a version of Israel’s security that entails Israeli control of all of Palestine’s [sic] borders and part of its territory.”

“Israel’s confiscation of what international law has clearly established as others’ territory,” Israel’s “illegal land grabs only add to the Palestinian and the larger Arab sense of injustice that Israel’s half-century-long occupation has already generated,” “No Palestinian leader could or would ever agree to a peace accord that entails turning over the Jordan Valley to Israeli control,” “these Israeli demands can hardly justify the permanent subjugation and disenfranchisement of a people  to which Israel refuses to grant citizenship in the Jewish state.”

The Israelis “do not have the right to demand that Palestinians abandon their own national narrative, and the United States should not be party to such a demand.”

The hate-filled five also mocked Israeli Prime Minister Benjamin Netanyahu’s claims that Israel was prepared to make “painful compromises” in his May 2011 speech to a joint session of Congress. According to The Five, every one of the painful compromises – “regarding territory, borders, security, resources, refugees or the location of the Palestinian state’s capital” are ones required of the Palestinian Arabs and “do not reflect any Israeli compromises.”

“Although Palestinians have conceded fully half of the territory assigned to them in the U.N.’s Partition Plan of 1947″ ignoring at least two monumental facts: one, there were no Arabs claiming to be “Palestinians” in 1947, so there was no assignment of land to “Palestinians,” but instead to undifferentiated Arabs in the region, and two, the Arabs to whom the land was assigned refused that assignment and instead chose to go to war rather than have any Jewish state at all in the region.

What are they talking about? There was no concessions by the Arabs, “Palestinians” or otherwise.  Instead, there was a humiliating defeat of the five Arab nations which attacked the tiny ragtag Jewish army and lost.

Pickering and his four pals, after ignoring history, reality, international law and facts, then cheered on what they consider to be the righteous Palestinian Arabs who “are not demanding a single square foot of Israeli territory beyond the June 6, 1967, line.”

So clueless about history are the Pickering plus four, that they again raise the “assigned” territory, attacking Netanyahu for daring to “establish equivalence between Israeli and Palestinian demands,” and insisting that Israel gets still more of the “78 percent of Palestine it already possesses.” Pickering and his pals call this “politically and morally unacceptable,” and demand that the United States “not be party to such efforts.”

When asked why Brandeis chose to honor Pickering, a known anti-Israel public official, a member of the Brandeis Communications team came back – after requesting two extensions – with a woefully shallow response.

Bill Schaller, Brandeis’s “executive director of integrative media,” emailed back that Pickering has had a “long and diverse career, which has often included staunch advocacy for Israel.”

The one example of “staunch” Israeli advocacy Brandeis offered was Pickering’s “efforts to repeal the UN resolution regarding Zionism.”

That resolution, equating Zionism with racism, was passed in 1975 and was finally repealed in 1991.  So even by the University’s lights, Pickering’s last Zionist stand was 24 years ago. And while Pickering may have played a positive role in helping to revoke that heinous United Nations resolution – most people recall New York Senator Daniel Patrick Moynihan and U.S. Ambassador John Bolton as central players – his actions regarding the Jewish State within living memory are alarmingly hostile.

Even the United Nations at one time was not anti-Israel. But that world body is currently considered anti-Israel because of its recent history. Pickering should be judged similarly.

In its statement, Brandeis officials explained that it “engage[es] an outside firm to vet the candidates,” in addition to involving Board members and faculty.

Perhaps the university should consider engaging an outside firm to educate its board members and faculty on the namesake of their university.

The author of this article graduated from Brandeis University in 1980. To honor Justice Brandeis, she has torn up her diploma.

About the Author: Lori Lowenthal Marcus is the US correspondent for The Jewish Press. She is a recovered lawyer who previously practiced First Amendment law and taught in Philadelphia-area graduate and law schools. You can reach her by email: [email protected]

The Commencement Speaker Brandeis University chose for 2015 is a spit in the eye of its ardently Zionist namesake, Justice Louis D. Brandeis.