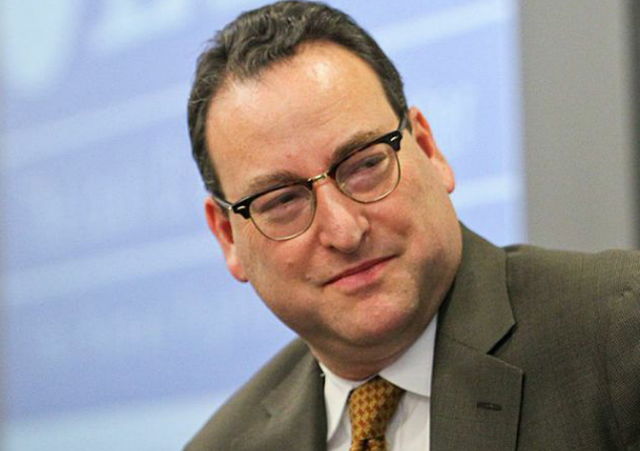 The Senate Health Education Labor and Pensions (HELP) Committee just voted 12-11, on a straight party line vote, to advance the nomination of Kenneth Marcus to become Assistant Secretary for Civil Rights in the Department of Education, the press office of Chair Lamar Alexander has confirmed. The vote took place after an determined assault on the nomination by anti-Israel activists.

In such position, Marcus would lead the DOE Office for Civil Rights, a position which has a huge impact on higher education. It was the Obama-era OCR that imposed the disastrous “Dear Colleague” letter eviscerating due process in campus sexual assault tribunals. The Office also deals with issues of discrimination.

Marcus is one of the leading scholars on anti-Semitism, and its modern forms, such as the Boycott, Divestment and Sanctions (BDS) movement.

I used some of Marcus’ writings in preparing my own presentation on When Does Anti-Israelism Turn Into Anti-Semitism?

Marcus also is the founder of the non-partisan Louis D. Brandeis Center for Human Rights Under Law, which focuses on human rights and issues of anti-Semitism through a law school outreach program. I serve as faculty advisor for the Cornell Law School chapter.

In October 2017, Marcus was nominated to head the Office of Civil Rights in the U.S. Department of Education. As Prof. Miriam Elman pointed out at the time:

Marcus is extraordinarily qualified for the job, and is an excellent pick for leading the Office for Civil Rights (OCR).

He’s got considerable experience on the issues at stake for the OCR, having previously been the staff director of the U.S. Commission on Civil Rights for four years during the George W. Bush administration and, prior to that post, serving as deputy assistant secretary for civil rights at the DoE.

Yet because of Marcus’ opposition to BDS, he became the subject of a vicious smear campaign by numerous anti-Israel groups. In December 2017, Prof. Elman documents this assault on Marcus’ nomination, Anti-Israel Lobby intensifies campaign against nomination of anti-Semitism scholar Ken Marcus:

With all this expertise and considerable past experience on the issues at stake for the OCR, Marcus should’ve been a shoo-in for the job. He should’ve easily received the HELP committee’s endorsement when it met again last week to vote on his confirmation.

But instead, Marcus’ confirmation appears to be held up in committee on account of a sustained and vocal outcry against him by an assorted array of virulently anti-Israel organizations and activists. They’ve been mobilizing their members to bombard the HELP Committee Senators with smears against the nomination, which is likely turning at least some Democrats on the committee against his appointment.

Prof. Elman documented how that attacks on Marcus started with BDS supporters, but then shifted tactics to hijacking civil rights groups to oppose the nomination:

That is, before the December 5th Senate HELP committee hearing, the smear campaign against Marcus was almost entirely centered on delegitimizing him as an “anti-Palestinian crusader”—someone who opposes Palestinian rights because he allegedly “bullies students and faculty who advocate for Palestinian rights”, “undermines pro-Palestinian activism on campus”, tries to get “student activists disciplined” and works to “defund” university Middle East Studies program.

Multiple statements, Action Alerts, petitions, videos, and editorials (see, for example, here and here) were written and produced during this time centering on the free speech of Palestinian student activists and the ways in which Marcus would supposedly trample on it.

They’re ludicrous accusations. As we discussed in our prior post, Marcus has never said anything anti-Palestinian and actually objects to silencing any voice on campus (he has even publicly stated that “people who hate Israel” should “not be silenced”). His position is rather that anti-Jewish harassment and intimidation on campus should be addressed with the same vigor as would any other type of bigotry—so that ALL students are able to learn in a welcoming and safe environment….

In recent weeks, this ugly smear campaign has expanded from just opposing Marcus on account of his position on BDS and antisemitism—the central messaging before the December 5th confirmation hearing—to an effort over the last several weeks aimed at destroying his civil rights record in general.

Basically, his application of civil rights protections for other minority groups is now coming under attack.

The Free Beacon also covered the attacks on Marcus:

Anti-Israel groups, such as Palestine Legal, the Arab American Institute, and Students for Justice in Palestine, are now denigrating Marcus as “anti-free speech” and “anti-civil rights.”

“Marcus has a long record of targeting First Amendment-protected speech and scholarship of people with whom he disagrees,” writes Palestine Legal in its campaign to oppose Marcus.

Palestine Legal is a leading activist for BDS and has drafted boycott, divestment, and sanction resolutions for BDS groups on college campuses brought before student governments.

The head of Palestine Legal, Dima Khalidi, has decried “influential” groups and individuals who want to ensure that the United States “continues to unconditionally support Israel.”

The Arab American Institute is also involved in the campaign to derail Marcus’s nomination. The group, led by James Zogby, who has referred to Israelis as “Nazis,” has painted Marcus as anti-LGBTQ. The group claims he “weakened” Title IX protections and that he “chilled free speech on campus” by opposing BDS.

Dozens of “civil rights” groups opposed the nomination on partisan grounds, claiming Marcus would not enforce civil rights laws. The arguments they made were typical of the arguments made against most Trump nominees by left-leaning groups.

In response to this onslaught, a group of 60 groups submitted a letter in support of Marcus, as Algemeiner reported:

Dozens of advocacy groups on Monday called for the confirmation of Kenneth Marcus — a leading figure in efforts to combat campus antisemitism — to a prominent civil rights post at the US Department of Education….

Marcus’ record was strongly endorsed by 60 “Jewish, Christian, education and civil rights” organizations in a letter sent to members of the Senate Health, Education, Labor and Pensions (HELP) Committee, which is expected to consider his nomination this week.

The Senate HELP Committee was supposed to vote on the nomination in December, but Marcus along with over 100 other Trump nominees had to be renominated after the various Committees failed to vote by the end of December. Marcus was renominated, and came up for a vote today.

Marcus was voted out of Committee on a straight party line vote, 12-11. All Republicans voted in favor, all Democrats against.