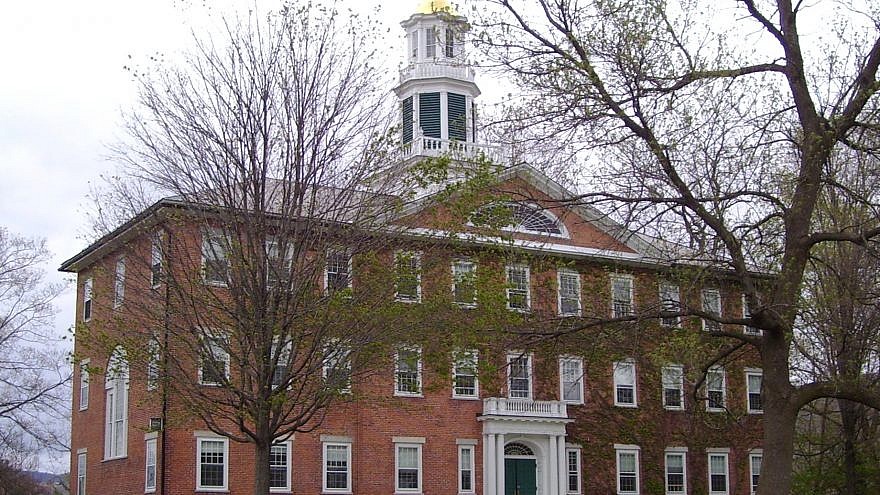 Griffin Hall of Williams College on Main Street in Williamstown, Mass. Credit: Beyond My Ken/Wikimedia.

Williams College has reached a resolution agreement with the U.S. Department of Education in lieu of an investigation over the student government rejecting a new pro-Israel group, Williams Initiative for Israel (WIFI), in an anonymous vote in April.

The college administration overrode the student government’s rejection of WIFI the following month.

“This Agreement contains no findings of fact, does not constitute an admission of liability on the part of the College, and does not represent a determination by OCR that the college has violated Title VI or its implementing regulations or otherwise engaged in any discriminatory conduct,” stated the agreement, obtained by JNS.

The Massachusetts school pledged that WIFI will be “afforded the same rights and privileges as registered student groups approved by the College Council,” and that it will treat the student organization “in a nondiscriminatory manner” in that the student government evaluates “WIFI requests for and provide financial assistance and other benefits” as such.

By June 1, 2020, Williams must submit documentation showing that it is complying with the clause that the student government evaluates WIFI financial assistance and other requests in a nondiscriminatory manner.

The resolution agreement was signed last week by Maud Mandel, who previously expressed “disappointment” over the college council’s decision.

The Office for Civil Rights’ Boston office announced in a May 31 letter it had been looking into a complaint filed earlier in the month by George Mason University law professor David Bernstein, accusing the College Council of violating Title VI of the Civil Rights Act, which prohibits “discrimination on the basis of race, color, or national origin, including shared ancestry or ethnic characteristics.”

“Williams College is an institution of higher education that received federal funds, and is subject to Title VI,” wrote Bernstein in the complaint.

“I think this is a great step forward in that it shows that both OCR and Williams College acknowledge that there is no place for anti-Semitic discrimination against Jewish-led student groups disguised as anti-Zionism,” Bernstein told JNS.

WIFI, per its constitution, seeks “to support Israel and the pro-Israel campus community, as well as to educate the college on issues concerning Israel and the Middle East.”

Issues that the council members had with the group included it not taking a position on matters pertaining to the Israeli-Palestinian conflict.

At an April 16 council meeting, one student asked, “Why do you feel the need to ally yourself with the State of Israel, as opposed to taking a human-rights-oriented approach?”

Another student seem concerned about having a club “that’s built on the assumption that Israel has a right to exist, in the sense that it has a right to enact its policies, which [are] oftentimes drowning out the voices of Palestinians.”

WIFI leader Molly Berenbaum responded, “It’s specifically just a group that thinks Israel should exist. That’s really as specific as it gets.”

The student government decision was condemned by Williams College president Maud Mandel, who said that the “transcript of the debate and vote indicate that the decision was made on political grounds.”

“I’m disappointed,” said Mandel, that the student government did not follow “its own processes and bylaws.”

The bylaws make no mention of political views as an eligibility factor.