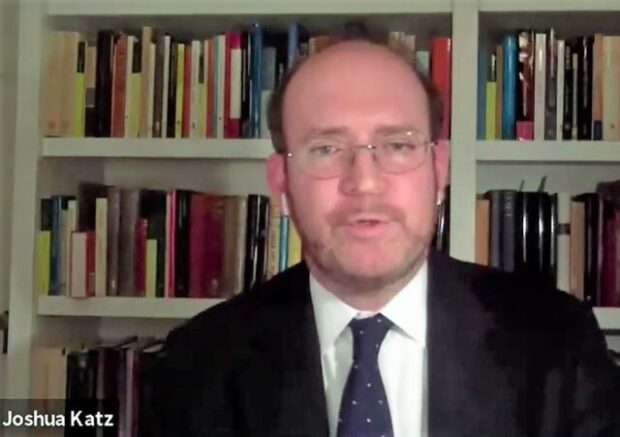 Princeton University Professor of Classics Joshua Katz was one of our panelists at our “Saving Higher Ed From Cancel Culture” event in August:

Joshua Katz, Cotsen Professor in the Humanities and Professor of Classics, Princeton University. Prof. Katz authored a column at Quillette, A Declaration of Independence by a Princeton Professor, that received enormous attention, sparking an effort to get him fired (not successful) and denounced by the President of Princeton (successful). You can read his after-action report, I Survived Cancellation at Princeton.

Katz gave a stirring presentation, which provided, in part:

In recent years, and especially recent months, people inside the Academy have, with frightening rapidity, persuaded a considerable segment of the populace that words are violence and need to be policed. Even more frightening is that these ideas have been coupled with violent actions and calls for defunding the actual, non-metaphorical police. My fellow denizens in the ivory tower are waging a war, and it is no longer advisable for me to retreat fully into the stacks of Princeton’s wonderful library. I only wish that I had spoken out sooner. Consider the newy dominant word “anti-racism”. It sounds attractive but isn’t. In fact, it is a Trojan horse for race-based discrimination of its own kind….

I’ve had enough. And I penned a lone letter of dissent. I believed then, and I believe now that what I wrote was measured, quite unlike the letter to which I was responding….

Nonetheless, the backlash was fierce. The president of Princeton issued a personal denunciation. A good number of my colleagues wrote and said scurrilous things about me…. And even some good has come from the presumptive “cancellation” ….

Free speech is a bedrock principle. If we cannot agree on this, then we are lost as a nation…. That’s an institutional comment, but then there’s, what’s more, most important for the mental health of anyone who walks through a firestorm. You need friends and supporters, people who will criticize, but not destroy you when you make a mistake. People who have your back, when they believe you’re right, though others seek to destroy you.

It is depressing just how many friends I’ve lost, but obviously they weren’t actually friends. Also depressing is just how many communications I received from people, including prominent colleagues at Princeton who say that they wish they could support me publicly, but, alas, are afraid of what will happen to them if they do. Still, some people, friends old and new, have stepped up to the plate, and I will be forever, especially grateful to them….

The pressure to apologize in an effort to appease one’s tormentors can be tremendous, but do not give into the pressure. If you feel you did no wrong, do not apologize. The majority of Americans loathe cancel culture; it is time to stop being afraid to express over and over again, and in as many public ways as possible, our collective disgust at the shocking illiberalism that has taken over the minds of a highly vocal, often extraordinarily privileged, minority of our citizens.

Well, in one sense, yes. He wasn’t fired.

But it’s never really over when a professor has stood against campus political culture. Cancel culture isn’t just about the initial surge, it’s also about what happens afterwards, and retaliation that comes in many different forms.

We saw that at the University of Central Florida, where the administration knew they couldn’t fire Prof. Charles Negy over his tweets, so they solicited complaints about his classroom and other conduct, then launched an 8-month intensive investigation to find a reason to fire him. UCF claimed to find reasons, some dating back many years and at least one involving conduct UCF already cleared. UCF fired Negy, and the courts eventually will determine whether the investigation was pretext for punishing speech.

Not exactly the same thing happened with Katz. It doesn’t not appear, from anything I’ve seen so far, that the Princeton administration continues to target him. Nope, that effort is coming from the student newspaper The Daily Princetonian, which has been pursuing extraneous old claims against Katz, particularly one that already was addressed many years ago by the university administration. None of this would have happened had Katz not spoken out.

After a several month investigation into Katz, on February 2, 2021, the Daily Princetonian reported that in the “mid-2000s” Katz had a consenual romantic relationship with a student. That incident was completely known to the Princeton administration, who at the time put Katz on leave without pay for a year. Katz issued this statement in response to the Daily Princetonian “scoop”:

Following is a statement that Professor Joshua Katz has made available today to Princetonians for Free Speech (PFS). For background, please see these two PFS editorials and a retired faculty member’s letter to the editor of the Daily Princetonian — which it has neither published nor acknowledged.

When I was a young professor, I had a relationship with a student that violated the University’s rules. It was a consensual relationship. It did not involve – nor has anyone ever suggested that it involved – any coercion, harassment, or quid pro quo. Nonetheless, it was wrong, and I am ashamed of my past conduct.

Long after the relationship ended, it was brought to the attention of the University. When the university initiated its investigation, I immediately provided a complete, truthful, and genuinely remorseful account of what had happened. I have fully and willingly complied with all of the requirements imposed by the University as the result of my conduct, including a yearlong unpaid suspension and continued counseling. I have learned from my mistakes.

I have never come anywhere close to crossing this type of line with another student. I have, however, been a friend over the years to many students, male and female alike. In one instance, it was brought to my attention years after the fact that a student had felt uncomfortable having such a close personal friendship with a faculty member. After investigating the matter, the University determined that I had not violated any of its policies, but counseled me on the appropriate boundaries of faculty-student friendships.

I have been properly held accountable by the University for my conduct. I regret this conduct, and I am deeply grateful for the University’s continuing faith in me as a teacher, scholar, and adviser.

While I realize that some may still have questions, this statement is as full an account as I can give of these events while respecting the privacy of all concerned.

The Princeton administration backed up Katz that this was a closed incident:

University spokesperson Ben Chang wrote to the ‘Prince’ that Katz’s statement “accurately reflects the relevant facts as we understand them.” He declined to share any further details beyond what was reflected in Katz’s statement out of “respect for the privacy of all the involved parties.”

“Based on the information available to the University, and his subsequent compliance with University requirements, we believe that Professor Katz is able to fulfill his responsibilities as a member of the faculty,” Chang wrote.

Since that original scoop, the Daily Princetonian has run numerous stories and opinions suggesting that Katz needs to be fired, further investigated, stripped of some responsibilities, and so on. It’s meant to raise the pressure on him. We have seen this movie before.

Clearly, Katz is being targeted because of his political opinions, the rest is pretext. There are a lot of students, and faculty, who want him gone, so they are going to try to drive him out.

A group called Princetonians for Free Speech has come to Joshua’s defense in a series of posts on its website:

More McCarthyism at the Daily Princetonian

Update, Feb 17: A New Attack on Free Speech Is Insipid as Well as Vicious

The Daily Princetonian launched another lengthy McCarthyist attack on a Princeton professor on February 11, exactly one week after its original attack article on him, by publishing prominently an insipid, as well as cruel, personal attack framed as an opinion piece by Princeton senior Braden Flax, under a grossly misleading headline. Meanwhile, the newspaper has not even acknowledged a February 7 letter to the editor from a former long-term Princeton senior lecturer that criticized the February 4 article as “attempted character assassination.”

Update, Feb 13: Letter to the editor which Daily Princetonian has ignored

Professor Elizabeth Bogan, a much-admired senior lecturer who retired last year after teaching economics from 1992 to 2020, submitted the following letter to the editor to the Daily Princetonian on February 7. She told PFS on February 13 that it had not been published or even acknowledged. Meanwhile, the paper has continued to attack Professor Katz.