Temple University Speaker Calls For Israel To Be Replaced

In the event, Ajlouny began by accusing Israel of being “created on a false premise of a land without people, through ethnic cleansing, massacres, and forcing over 700,000 Palestinian to flee.” 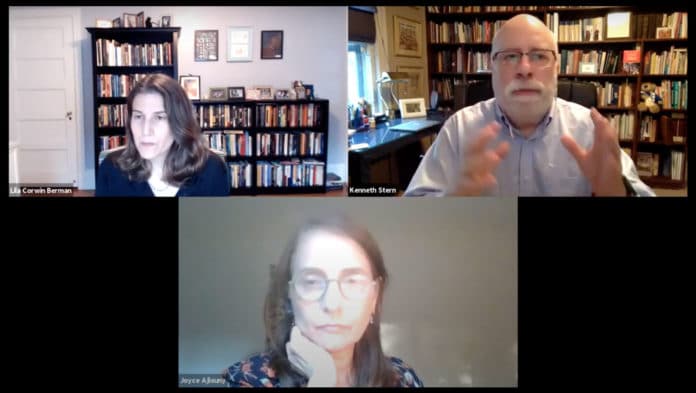 Last week, the Feinstein Center for American Jewish History and Congregation Rodeph Sholom of Philadelphia invited Joyce Ajlouny to share her hate of Israel. During the April 20 event, titled “The Weaponization of Discourse: Where is the Line Between Anti-Israel and Anti-Semitism on Campus?”, Ajlouny asserted that she favors “a secular, democratic state” — which, in plain English, means the elimination of Israel.

Why did the Feinstein Center and a prominent synagogue give Ajlouny a platform, knowing that she was almost certainly going to engage in such anti-Israel libels, since she has been saying the same things for decades? Ajlouny is, after all, executive director of the American Friends Service Committee (the foreign policy arm of the Quakers), which has repeatedly compared Israel to Nazi Germany.

In the event, Ajlouny began by accusing Israel of being “created on a false premise of a land without people, through ethnic cleansing, massacres, and forcing over 700,000 Palestinian to flee.” She said Israel governs through “an apartheid system.” She declared, unequivocally, “I am an anti-Zionist.”

Professor Kenneth Stern of Bard College, the event’s other panelist, responded by calling her rant “incredibly moving” then emphasized that Arabs and Israelis “need coexistence.” Ajlouny replied, “I would like to have coexistence in one secular democratic state, but that is a subject for another discussion.”

Ajlouny, who has lived most of her life in Ramallah and has been a public advocate for the Palestinian Arab cause for decades, knows full well that the term “one secular democratic state” is the longstanding PLO motto for eliminating Israel and replacing it with “Palestine.”

In her remarks, Ajlouny also staunchly defended the Boycott, Divestment and Sanctions (BDS) movement (which all major Jewish organizations consider to be anti-Semitic, since the goal of BDS is the elimination of Israel). “I don’t see sanctions [against Israel] as hatred,” she insisted. “I see them as a way to get my rights. It’s effective. If you’re living under an apartheid system and military rule and you are looking for ways to liberate yourself, you have to look for strategies that are effective.”

Ajlouny then praised extremist pro-BDS groups, in particular the US Campaign for Palestinian Rights, which lobbies against U.S. aid to Israel, accuses Israel of “genocide” and supports a Palestinian “right of return.” Ajlouny blamed anti-BDS efforts on the conspiracy of the “pro-Israel lobby” and its “well-oiled machine,” which she said opposes BDS as part of a plot to “silence Palestinians” and “suppress Palestinian rights.”

AJLOUNY BLAMED ANTI-BDS EFFORTS ON THE CONSPIRACY OF THE “PRO-ISRAEL LOBBY” AND ITS “WELL-OILED MACHINE.”

“I am being silenced over and over again,” Ajlouny loudly asserted. “We are prevented, even by law, to share our story.”

The panel discussion was supposed to focus on the definition of anti-Semitism crafted by the International Holocaust Remembrance Alliance (IHRA), which has been accepted by numerous governments, including the United States. But for Ajlouny, talking about anti-Semitism is a bit of a conundrum, because she refuses to acknowledge that one of the most pernicious sources of anti-Semitism today is the Palestinian Authority. In its official media and schools, the PA constantly accuses Jews of controlling America, denies the Holocaust and cites the Protocols of the Elders of Zion as a reliable source of information.

An infamous example of such anti-Semitism was the April 2018 speech by PA leader Mahmoud Abbas, in which he asserted the Holocaust was not the result of anti-Semitism but rather was caused by the Jews’ own “social behavior, [charging] interest, and financial matters.” J Street acknowledged that the speech “featured absurd anti-Semitic tropes.” But not Joyce Ajlouny. To her, “Constant accusations against Palestinians of anti-Semitism are like the boy who cried wolf.”

This is what the Feinstein Center for American Jewish History and Congregation Rodeph Sholom gave the Jewish community this week — ninety minutes of Israel-bashing disguised as an academic discussion.

Moshe Phillips is national director of Herut North America’s U.S. division. Herut is an international movement for Zionist pride and education and its U.S. website is https://herutna.org/

Temple University Speaker Calls For Israel To Be Replaced

In the event, Ajlouny began by accusing Israel of being “created on a false premise of a land without people, through ethnic cleansing, massacres, and forcing over 700,000 Palestinian to flee.”